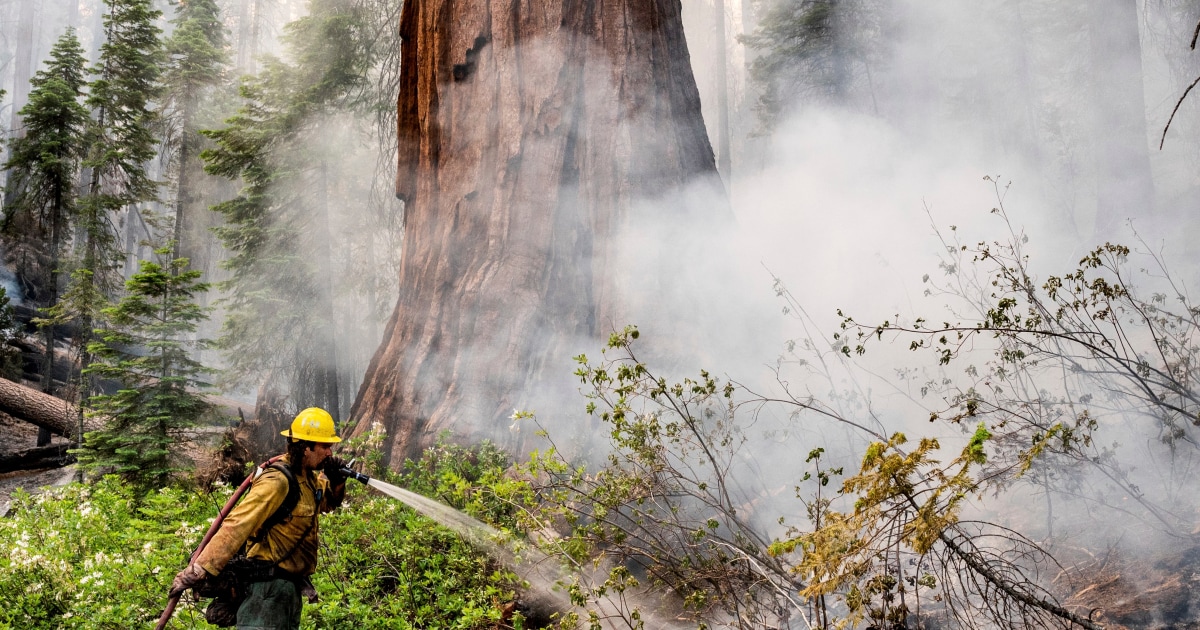 A fire in California's Sierra Nevada continued to expand Sunday, with sprinklers deployed to protect the cherished giant sequoia trees of Mariposa Grove.The blaze in Yosemite National Park was measured at 2,044 acres by evening. It had no containment, and it was likely to continue to grow amid light winds and hot conditions, U.S. Forest…

A fire in California’s Sierra Nevada continued to expand Sunday, with sprinklers deployed to protect the cherished giant sequoia trees of Mariposa Grove.

The blaze in Yosemite National Park was measured at 2,044 acres by evening. It had no containment, and it was likely to continue to grow amid light winds and hot conditions, U.S. Forest Service officials said Sunday.

The beloved trees have not been wrapped in fire suppression foil, as had been reported, Yosemite National Park Superintendent Cicely Muldooni said Sunday.

Instead, park officials have turned to portable sprinklers to protect the more than 500 sequoias, which hold a unique place in American history. President Abraham Lincoln set aside the grove, along with Yosemite Valley, in 1864 for “public use, resort and recreation,” according to the park service. It was the first time the government had ordered scenic areas to be protected for public benefit.

Still, the blaze, which has been burning since Thursday and is formally known as the Washburn Fire, has damaged some of the trees, which can be seen from the ground. But none so far appear to have been felled.

The National Weather Service measured temperatures in Mariposa, California, about 167 miles east of San Francisco, in the low 90s Sunday afternoon. Similar temperatures were expected early in the week.

The summer temperatures were abetted by abundant fuel, officials said. Garrett Dickman, a Yosemite National Park biologist, explained the problem in simple terms: “There’s a lot of wood on the ground, and that wood is going up in smoke.”

Wood on the ground includes dead trees and branches from a 2013-15 die-off.

“This also presents significant safety hazards to firefighters” who may have to walk through unstable grounds and watch out for falling trees and branches, according to the federal incident overview.

The grove was off-limits to visitors Sunday and is not likely to reopen as long as the fire remains a threat.

The closure includes the Wawona area and Wawona Road south of Yosemite West, park officials said. The park’s south entrance was also closed. The rest of Yosemite was open, but permits were required for peak-hour driving.

Residents of the Wawona area were under mandatory evacuation orders.

Park visitor Cara Exten was told to evacuate, an order she indicated made total sense. “By the time we got down in the Yosemite Valley, ash was raining down on us,” she said.

Federal crews, meanwhile, were at Mariposa Grove to set up and operate sprinklers, which Nichols said were just like the ones many people have at home, “except bigger.”

Crews paid special attention to the 209-foot Grizzly Giant, the second-tallest sequoia in the grove, ensuring the spray from sprinklers reached the area of its base.

The grove’s other stars, the California Tunnel Tree, the Bachelor and Three Graces, and Fallen Monarch, were so far unscathed.

Fire suppression foil was not yet used, but it came in handy when crews defensively wrapped another national treasure, the Mariposa Grove Cabin used by Galen Clark. He was the guardian of the grove under Lincoln’s authority.