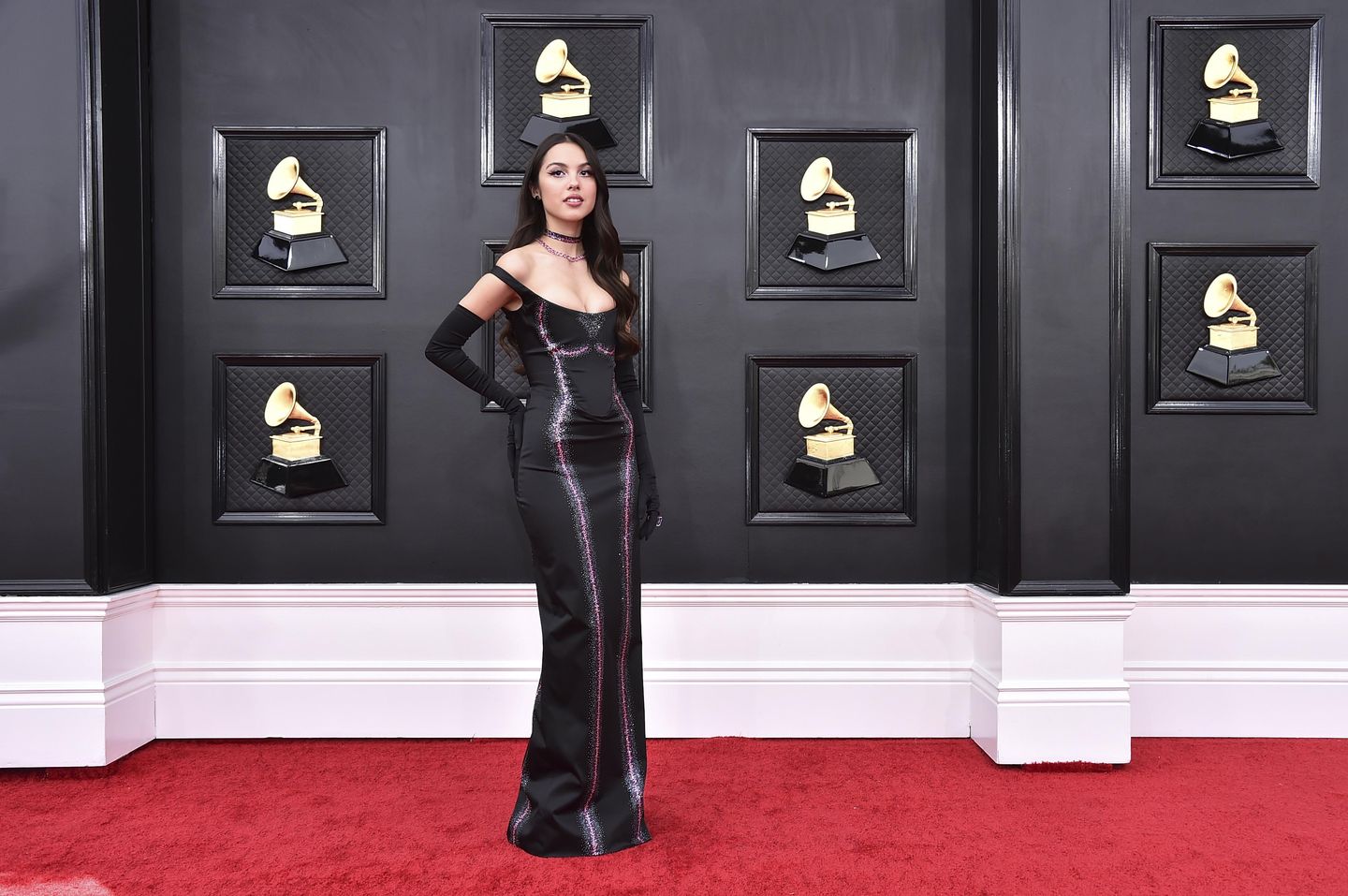 “The color of the season I hear is fuchsia,” he told E!

The look was straight off the runway.

Brandi Carlile toted about 40 pounds of hand-cut crystals on a multicolored Huge Boss tuxedo jacket with stripes of the same crystals on the trousers and waist.

“I’m finally morphing into Elton John, which is my dream,” she said.

Rodrigo was joined in black by Billie Eilish in a trench coat turned cape, lug soul boots on her feet. And all seven members of the sensation BTS wore custom Louis Vuitton suits with sneakers in a range of colors from bright white to muted blue.

Embellished metallics were abundant. Tiffany Haddish stunned in a fitted one-shoulder gown from Prada, and Carrie Underwood went full ballgown with sparkle in the top with a sash and a full skirt of sunset orange.

Sofia Carson wore an elegant Grecian gown from Valentino with a long sheer cape that swept over the carpet as she walked.

Among early walkers was Li Saumet from Colombia’s Bomba Estéreo, who covered her face with a helmet-like mask. Cherry Moon of the 1 Tribe Collective children’s group went all out in full gold, complete with a huge architectural collar. Victoria Evigan smooched her husband, Jason, in a peach and yellow dress with “Love is the Weapon” at the back.

Alisha Gaddis, with comedy on her resume, paired her shiny, minty gown with a head piece of high, golden branches. Elle King showed up resplendent in red, a bell-bottom trouser suit with an ultra-wide brim hat to match. Black Coffee, the DJ from South Africa, paid homage to his friend Virgil Abloh, wearing a pair of the late designer’s sneakers before his win for dance/electronic music album.

King, a new mom, was thrilled to be wearing Christian Siriano.

“I just trusted him. He knows how to dress all types of bodies and I really celebrate that in him,” she told The Associated Press. “I just wanted to feel powerful.”

As for the men, there was plenty of ornate, brocade jackets and suits in the early bunch.

Leon Bridges lent a nod to his native Texas in a cream tuxedo look embellished with embroidery and a touch of blue bonnets.

Among Evans’ early standouts was something on the other end of that spectrum, Cory Henry in a double-breasted suit and turtleneck combo.

“Rich, offbeat colors like purple can prove tricky when it comes to tailoring, but he nails the modernized ’70s vibe,” he said.