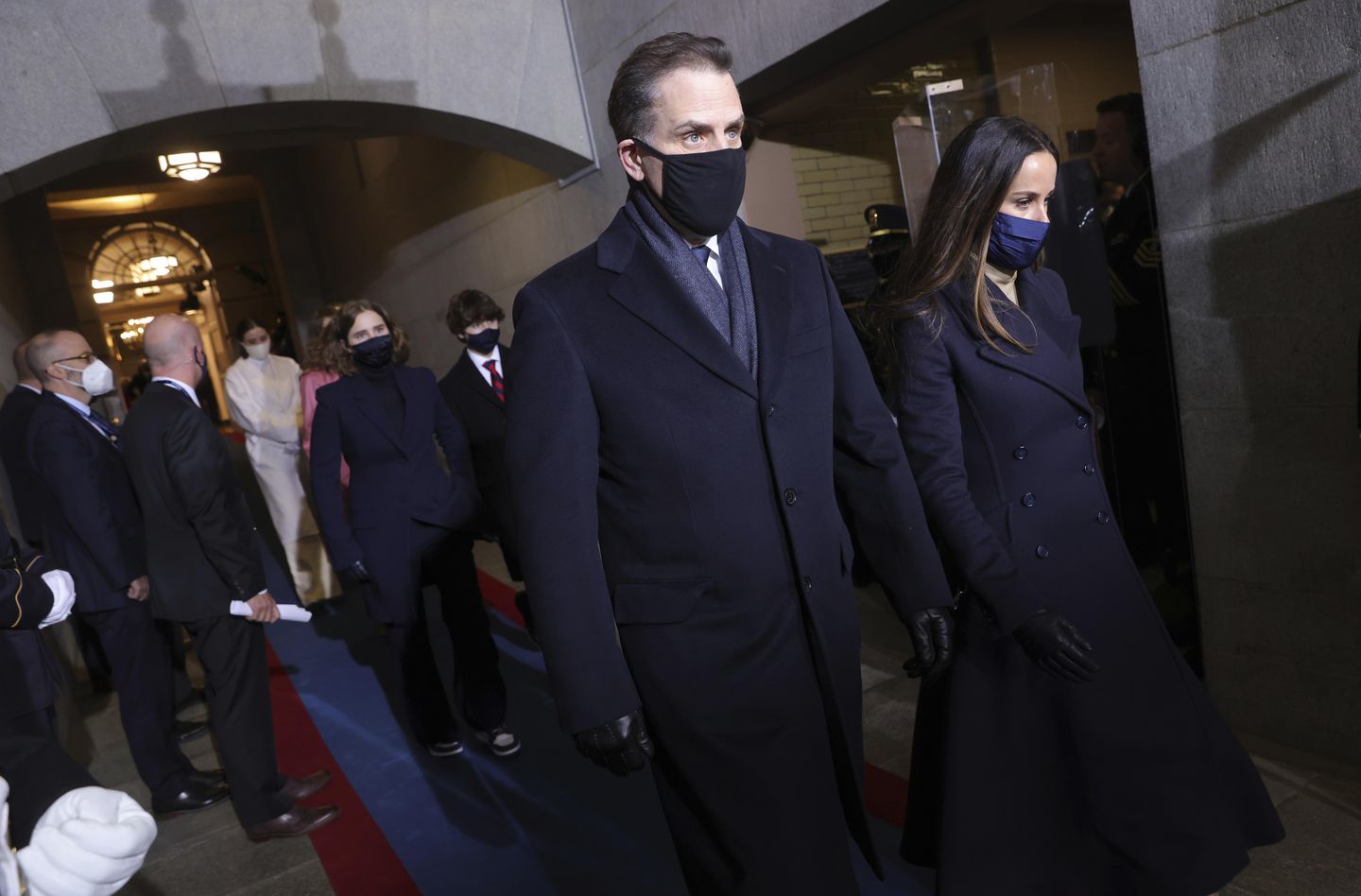 Hunter Biden’s infamous laptop is real, but high-ranking Democrats and intelligence officials who called it a Russian operation in 2020 — and thus deluded voters — are now dodging responsibility for promoting the false tale. In the week since the liberal New York Times acknowledged that it belatedly authenticated emails and other files from Hunter…

Hunter Biden’s infamous laptop is real, but high-ranking Democrats and intelligence officials who called it a Russian operation in 2020 — and thus deluded voters — are now dodging responsibility for promoting the false tale.

In the week since the liberal New York Times acknowledged that it belatedly authenticated emails and other files from Hunter Biden’s laptop, most of the officials and media organizations that blamed the story on Moscow during the 2020 presidential campaign are refusing to comment or to acknowledge they were either wrong or lying.

The laptop, abandoned by Hunter Biden at a Delaware computer repair shop in 2019, contained a trove of emails and other files detailing his business relationships in Ukraine and China, information that implicated his father in some of his dealings. Former New York Mayor Rudolph W. Giuliani, an attorney for President Trump, obtained the hard drive and turned it over to The New York Post.

At the time, The Post was virtually alone in publishing the story amid a storm of denouncements from Democrats and other media outlets and a news blackout of the report by Big Tech platforms such as Facebook.

President Biden, who called the laptop story “garbage” during his second debate with Mr. Trump in October 2020, hasn’t said a word publicly about his son’s laptop files being verified by the liberal world’s newspaper of record. The White House didn’t respond to requests for comment by The Washington Times.

Former Director of National Intelligence James R. Clapper and former CIA Director John O. Brennan also didn’t respond to requests for comment from The Washington Times. They were among 51 U.S. intelligence officials, including former CIA chief Leon E. Panetta, who issued a statement on Oct. 11, 2020, asserting that the laptop report had “all the classic earmarks of a Russian information operation.”

Although the former intelligence chiefs acknowledged at the time that they had no evidence of Russian involvement, they said, “Our experience makes us deeply suspicious that the Russian government played a significant role in this case.

“If we are right, this is Russia trying to influence how Americans vote in this election, and we believe strongly that Americans need to be aware of this,” they said.

Russell Travers, a former acting director of the National Counterterrorism Center, was the only person contacted by The Washington Times to offer a defense for having signed the statement.

“I worked Soviet/Russian issues for the first 20 years of my career and watched their disinformation efforts have devastating effects around the globe,” Mr. Travers said. “As I believe the letter indicated, this had all the hallmarks of such an effort. And particularly given the Giuliani connection/track record and his issues with the Russians, I certainly felt then that this was a prudent, cautionary warning.”

He added, “I also applaud actual investigative journalism getting to ground truth wherever that may lead.”

Mr. Clapper told The New York Post that he stands by the statement he signed with the other former intelligence officials.

“I think sounding such a cautionary note at the time was appropriate,” Mr. Clapper said.

Hunter Biden reportedly has paid off about $1 million in tax liabilities while a grand jury gathers evidence in a broad investigation of his international business dealings. The investigation includes suspected criminal violations of tax laws, as well as foreign lobbying and money laundering rules, according to reports.

An attorney for Hunter Biden did not respond Tuesday to a request for comment. Attorneys for Hunter Biden said in October 2019 that he undertook his business activities in Ukraine independently.

“He did not believe it appropriate to discuss them with his father, nor did he,” they said in a statement.

At the time the laptop’s discovery became public in the fall of 2020, liberal news outlets hammered the theme that it was the product of Trump operatives who were either duped by Russians or were collaborators with Moscow in a bid to undermine Mr. Biden’s campaign. Liberal talking heads took up the cry.

“It is so obviously a Russian operation,” MSNBC contributor Jason Johnson said at the time. Mr. Johnson didn’t respond to a request for comment this week.

During the second presidential debate, Mr. Trump tried to raise the laptop issue while moderator Kristen Welker of NBC News steered the discussion toward subjects of race relations.

Ms. Welker admonished him: “President Trump, we’re talking about race right now, and I do want to speak on the issue of race.”

Mr. Biden interjected, with the moderator’s approval, “Look, there are 50 former national intelligence folks who said that what this, [what] he’s accusing me of, is a Russian plan. They have said that this has all the characteristics — four, five former heads of the CIA, both parties — say what he’s saying is a bunch of garbage. Nobody believes it except him and his good friend Rudy Giuliani.”

Mr. Trump replied, “You mean the laptop is now another ‘Russia, Russia, Russia’ hoax? … You have to be kidding here. Here we go again with Russia.”

Former Attorney General William Barr said this week that he believes Mr. Biden and others were trying to mislead the public at the time.

“I was very disturbed during the debate when candidate Biden lied to the American people about the laptop,” Mr. Barr said on Fox News. “He is clearly confronted with the laptop, and he suggested that it was Russian disinformation and pointed to the letter written by some intelligence people that was baseless, which he knew was a lie. I was shocked by that.”

Mr. Barr noted that Trump-appointed Director of National Intelligence John Ratcliffe declared at the time that the laptop report was not Russian disinformation. He said the FBI also refuted the claim.

“The media ignored it,” Mr. Barr said. “So when you’re talking about interference in an election, I can’t think of anything more than that kind of thing.”

In an appearance on CBS’s “60 Minutes” two weeks before the presidential election, Mr. Trump raised the laptop issue with interviewer Lesley Stahl.

“Excuse me, they found the laptop. Lesley. Listen,” Mr. Trump said. Ms. Stahl countered repeatedly that the laptop could not be “verified,” so the network wasn’t covering the story.

Republican lawmakers say the public should be outraged by the developments. Sen. Ron Johnson, Wisconsin Republican, took aim at news media and Big Tech for self-censoring the story in 2020. Twitter and Facebook blocked The New York Post’s articles online before the election.

“The mainstream media, their bias, their corruption, their complicity in the Russian collusion hoax, interfered with our elections,” Mr. Johnson told host John Catsimatidis on WABC 77-AM. “Had a far greater impact on our elections than anything Russia or China ever could hope to accomplish. But they’re never held accountable because they have to hold themselves accountable, and they are not going to do that.”

While he was chairman of the Senate Homeland Security and Governmental Affairs Committee, Mr. Johnson investigated Hunter Biden’s $50,000-a-month job with Ukrainian energy company Burisma. He said the FBI also must have known the laptop was genuine. The computer repair shop owner reported the laptop to the FBI, which seized the device.

“The FBI had to know that,” he said. “They wouldn’t tell us when we were offered the laptop. I couldn’t take it because I had to do my due diligence. The FBI knew. We reached out to the FBI. They wouldn’t tell us it was genuine. They should have. But they didn’t. People should be outraged.”

“For decades, the Biden family has cashed in on Joe’s government service,” Mr. Cotton tweeted. “Even today, Hunter Biden is getting paid millions for his ‘artwork’ in a corrupt arrangement blessed by the White House.”

Sen. Rick Scott, Florida Republican, said in a Twitter post that news media’s censoring helped Mr. Biden win the presidency. He said The New York Times article “confirmed what many of us already knew: the Democrats and their allies in media and Big Tech conspired to cover up the Hunter Biden story to help @joebiden win a presidential election.”

In one of Hunter Biden’s emails to business partner Devon Archer in 2014, when Mr. Biden was vice president, Hunter Biden said his father’s pending trip to Ukraine should “be characterized as part of our advice and thinking — but what he will say and do is out of our hands.”

Mr. Biden traveled to Kyiv, the Ukrainian capital, about a week later.

In another set of emails examined by prosecutors, The New York Times reported, Hunter Biden and Archer discussed inviting foreign business associates, including a Burisma executive, to a dinner in April 2015 at a Washington restaurant where Mr. Biden would stop by. The vice president did make an appearance, the paper reported.

Archer was sentenced last month to one year in federal prison on an unrelated securities fraud conviction.

He has provided The Wall Street Journal with emails and text messages from his time as CEO of SinoHawk Holdings, a venture between the Bidens and CEFC China Energy. Mr. Bobulinski has called the accusations of Russian disinformation “offensive” and provided documents at the time suggesting that Hunter Biden was cashing in on the family name and that his father was involved.