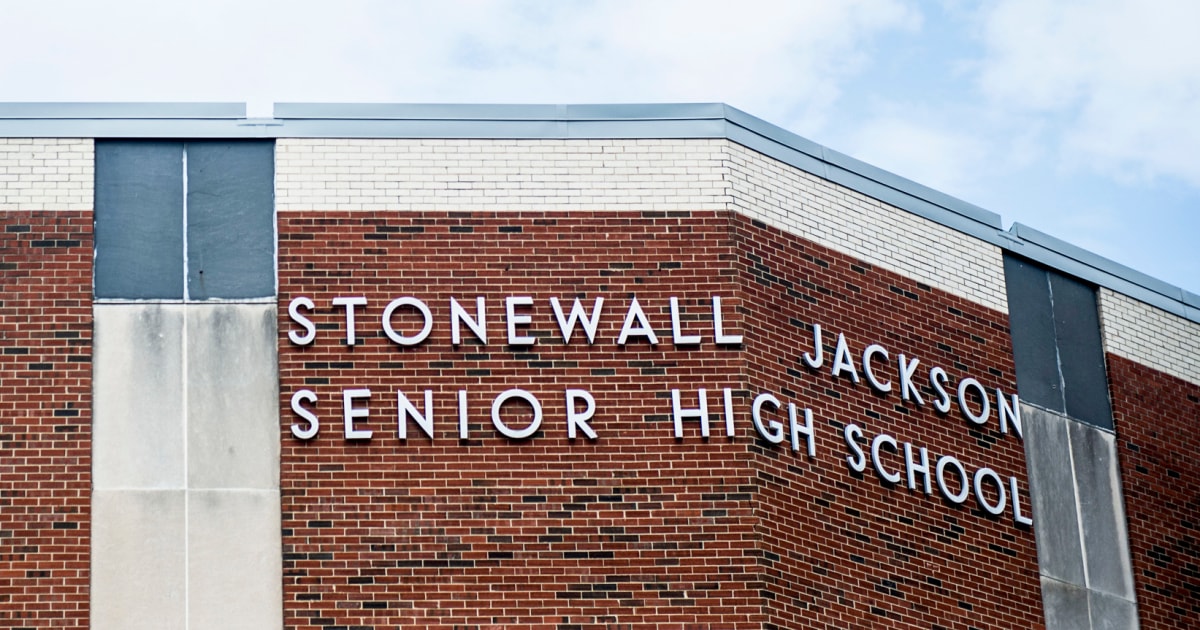 A Virginia board is considering restoring the names of two schools which were originally named for Confederate generals but changed in 2020 after the murder of George Floyd.The Shenandoah County School Board in 2020 voted to change Stonewall Jackson High School to Mountain View High School and Ashby-Lee Elementary School to Honey Run Elementary School.…

A Virginia board is considering restoring the names of two schools which were originally named for Confederate generals but changed in 2020 after the murder of George Floyd.

But in the two years since, community members — especially alumni — have expressed opposition to the name changes, school board member Cynthia Walsh told NBC News.

More than 4,000 people have signed a petition to change the names back, Vice Chair Dennis Barlow said at a board meeting, where the issue was discussed at length last week.

Walsh is one of three members who were on the board when the name changes were approved. The current, all-white board is made up of six members.

Some new board members feel the decision to change the names was rushed and did not consider the opinion of the community.

Barlow, who characterized those who were in favor of changing the names as outsiders who are “creepy,” “elitist” and from “the dark side,” said the school board’s decision was “undemocratic and unfair.”

He added that he regards Jackson as a “gallant commander.”

Walsh, who does not think the names should be changed back, argued: “Most people who vote for elected officials then count on them to do the right thing on their behalf.”

“We do have a representative democracy. We don’t have a direct democracy,” she added.

After Floyd’s death, statues, monuments, schools and buildings named for Confederate leaders became a focal point of the racial justice movement around the country. A number of the statues and monuments have come down.

“Times have changed, the makeup of our schools has changed,” Walsh said. “And I sincerely believe that revisiting the name change is not what’s best for kids.”

The board decided at the meeting that they would poll constituents on whether they believe the names should be changed back. But the board could not settle on whether to poll only the residents who live within the schools in question, or the whole area.

Kyle Gutshall, a recent high school graduate who was elected to the board this year, argued: “In my opinion if you’re doing it countywide, you might as well throw the students out because they don’t care.”

But other board members were adamant throughout the night that the decision has to first be what’s right for the students.

“No. 1 criteria: what is best for kids,” Andrew Keller said earlier in the meeting. “The kids we’e going to teach today and the next 25 years.”

They also didn’t settle on what options would be included in the survey, which they mostly agreed should have the questions:

Do you want to keep the names?

Do you want to restore the original names?

“I suggested a compromise: adding a third” option — I did not agree to the name change but I do not think we should change it back — “and that’s where we left it that night, but we didn’t vote on it,” Walsh said.

The next school board meeting is June 9.

The board likely won’t vote on the issue then, because they are still hammering out the details of the survey, Walsh said.

If the vote is split, the issue will likely be tabled for a year, or until there is a new board, she said.

Shenandoah County Public Schools declined to weigh in on the matter.

“It is the responsibility of the Shenandoah County School Board to determine the name of schools, school facilities, and areas of school facilities or grounds in the division. We do not have a comment or statement as a division at this time,” the district said in a statement.

The system serves about 6,000 students. More than 75 percent of them are white and about 3 percent are Black, according to U.S. News and World Report.

But Walsh said the statistics don’t show the full picture. “In one of our elementary schools, there are 10 languages spoken,” she said. “There is diversity.”