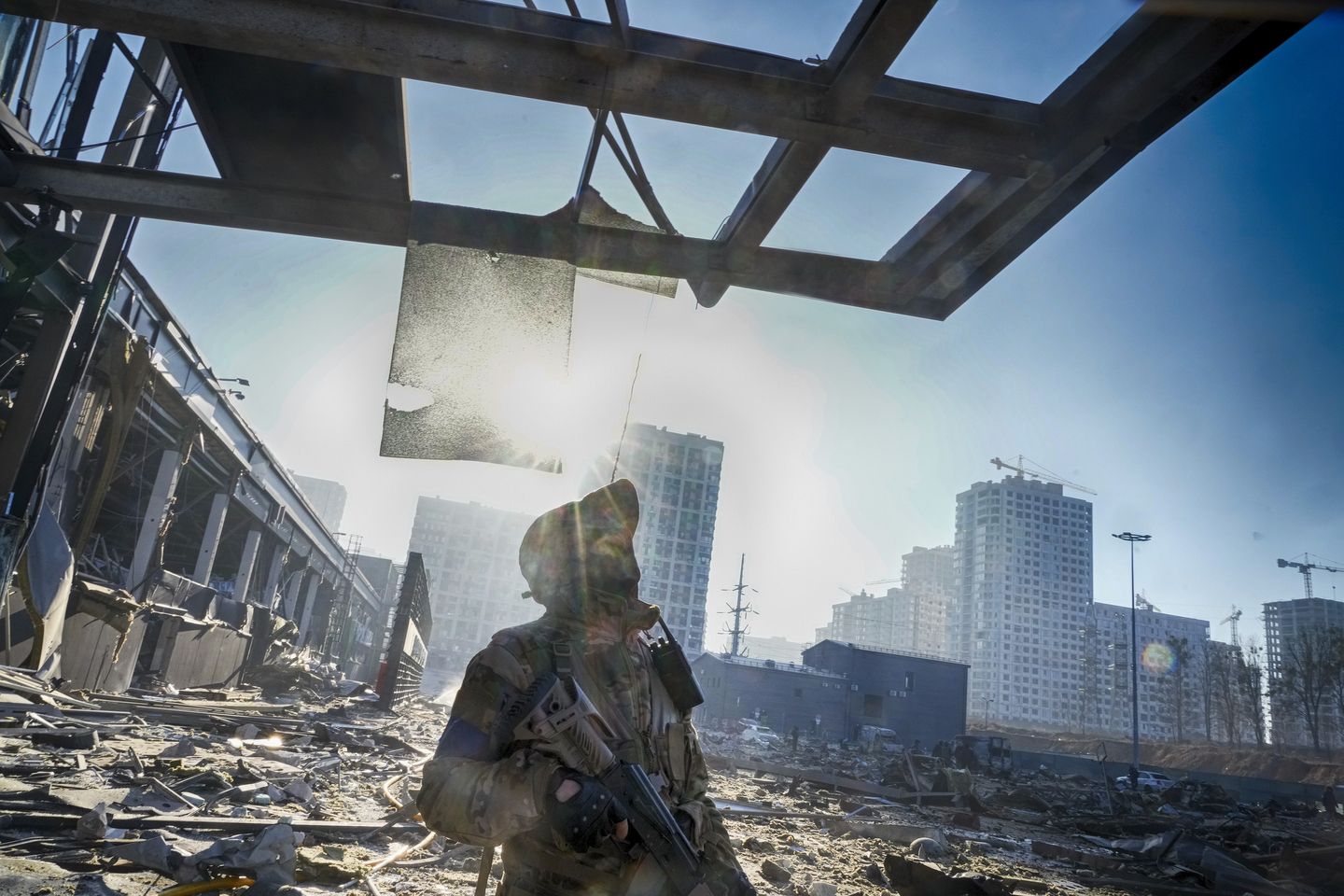 Defiant Ukrainians rejected Russia’s surrender demands Monday and vowed to keep fighting in the face of indiscriminate shelling and a growing death toll, while relations between Moscow and the West sunk to a post-Cold War low amid outrage over “massive war crimes” committed by Russian President Vladimir Putin and his troops. European Union foreign policy…

Defiant Ukrainians rejected Russia’s surrender demands Monday and vowed to keep fighting in the face of indiscriminate shelling and a growing death toll, while relations between Moscow and the West sunk to a post-Cold War low amid outrage over “massive war crimes” committed by Russian President Vladimir Putin and his troops.

European Union foreign policy chief Josep Borrell became the latest high-ranking official to describe Russia’s horrific attacks in the Ukrainian port city of Mariupol as war crimes. In using such strong language, he joined President Biden, who last week called Mr. Putin a “war criminal” because of Russia’s seemingly indiscriminate shelling of nonmilitary targets and acts of violence against civilians in Mariupol and elsewhere across Ukraine.

The comment sparked a harsh rebuke from the Kremlin. Officials warned that relations between the U.S. and Russia are “on the verge of a breach.” Dmitry Medvedev, deputy chairman of the Russian Security Council, said Mr. Biden and other U.S. officials are “puppeteers” seeking to drive a wedge between Moscow and the rest of the world, particularly Europe.

Mr. Biden, who is scheduled to travel to Poland this week, warned that Russia could soon launch a wave of cyberattacks against American companies. That would almost certainly spark additional economic sanctions and other repercussions from Washington.

With the war nearly a month old, Ukrainian officials stood strong and rejected calls to surrender Mariupol to the Russian invaders. The city has faced weeks of bombardment from Russian troops, leading to untold casualties and a massive exodus of civilians. Those who remain in the city have no electricity and little food and water. Russian forces are seeking to bomb and starve the city into submission.

Russian forces offered Ukrainians safe passage out of Mariupol in exchange for total surrender, but Ukrainian leaders brushed aside the offer before Moscow’s Monday morning deadline.

“There can be no question of any surrender” in Mariupol, said Ukrainian Deputy Prime Minister Iryna Vereshchuk.

Despite a considerable edge in manpower and weaponry, the Russian invaders have yet to capture a single major Ukrainian town. Defenders are digging in in Kyiv, Kharkiv and other major urban areas.

In a video address Monday, Ukrainian President Volodymyr Zelenskyy described the aftermath of Russia’s bombing of a Mariupol art school on Sunday. An estimated 400 people, including children, were inside at the time. It’s unclear how many were killed.

Mr. Zelenskyy used the incident as a rallying cry.

“They are under the rubble, and we don’t know how many of them have survived,” Mr. Zelenskyy said. “But we know that we will certainly shoot down the pilot who dropped that bomb, like about 100 other such mass murderers whom we already have downed.”

Mr. Zelenskyy again expressed openness to negotiating directly with Mr. Putin in hopes of ending the bloodshed. Ongoing negotiations between the two nations have made little progress.

Moscow said Ukrainians were using the site as a military depot. Those claims were not immediately verified.

Elsewhere, Russian troops reportedly hit civilian houses in an attack on the Black Sea city of Odesa, Ukraine’s biggest port, as they continued an assault on southern Ukraine.

Bombings and rocket attacks have become Russia’s weapons of choice as its ground forces struggle to achieve their key objectives. Western officials say that Russia’s military campaign largely has ground to a halt because of tougher-than-expected resistance from Ukrainian forces.

“Russian forces advancing on the city from the northeast have stalled. Forces advancing from the direction of Hostomel to the northwest have been repulsed by fierce Ukrainian resistance,” the British Defense Ministry tweeted in an analysis of the state of play in Ukraine.

“Despite the continued lack of progress, Kyiv remains Russia’s primary military objective and they are likely to prioritize attempting to encircle the city over the coming weeks,” the ministry said.

In an online article that was quickly removed, Komsomolskaya Pravda revealed that some 9,861 Russian soldiers had died in Ukraine and 16,153 were injured, according to recent Defense Ministry figures. Russian officials have not updated their casualty count from the operation since March 2, when they said 498 soldiers had been killed. Kyiv said nearly 15,000 Russian troops had been killed, but that figure could not be independently verified.

While Russia’s war machine was stalled, its rhetorical assault on the West went into overdrive. The Russian Foreign Ministry said U.S.-Russian relations were on the verge of a major “breach” after Mr. Biden’s “unacceptable statements” that Mr. Putin is a war criminal.

The White House and State Department said later that Mr. Biden was “speaking from the heart” and not announcing a formal war crimes charge against Mr. Putin. Still, U.S. officials said the brutal tactics of Russia’s invading forces will undergo serious scrutiny.

“We certainly see clear evidence that Russian forces are committing war crimes, and we are helping with the collecting of evidence of that,” Pentagon spokesman John Kirby told reporters. “But there’s investigative processes that are going to go on, and we’re going to let that happen. … As for what would come out of that, that’s not a decision that the Pentagon leadership would make.”

“What’s happening now in Mariupol is a massive war crime, destroying everything, bombarding and killing everybody,” said Mr. Borrell, the European Union’s representative for foreign affairs and security policy.

Administration officials acknowledged last week that the U.S. government was working with private rights groups to document Russian military operations for a possible war crimes investigation. Other NATO nations will likely assist in such an investigation.

Such close cooperation between the U.S. and Europe on investigations, economic sanctions and other issues has enraged the Kremlin. The Russian Foreign Ministry summoned U.S. Ambassador John Sullivan to complain about Mr. Biden’s remarks.

“Remarks such as these by the American president, which are unworthy of a state figure of such a high rank, put Russian-American relations on the verge of a breach,” the ministry said.

Mr. Medvedev, who served as Russia’s president from 2008 to 2012, took specific aim at the ties between the U.S. and Poland, which hasn’t flinched in its opposition to Moscow even as hundreds of thousands of Ukrainian refugees flood across its border and as Russian rockets fall just miles from its territory.

“The interests of Polish citizens are being sacrificed for Russophobia by these talentless politicians and their puppeteers from across the ocean with clear signs of senility,” Mr. Medvedev said in a Telegram post.

The U.S. and Poland have had clear disagreements, including a dust-up two weeks ago when Washington scuttled a Polish plan to deliver fighter jets to Ukraine via American military bases in Germany. U.S. officials are stiff-arming a Warsaw proposal to assemble a NATO “peacekeeping” mission to deploy to Ukraine.

“The president has been very clear that we will not put American troops on the ground in Ukraine,” Linda Thomas-Greenfield, U.S. ambassador to the United Nations, told CNN over the weekend. “We don’t want to escalate this into a war with the United States.”

Mr. Biden will use his visit to Poland this week to tamp down tensions between the countries and highlight Warsaw’s efforts to accommodate the vast streams of Ukrainian refugees within its borders. The president had a call Monday with top European leaders to discuss military and humanitarian assistance for Kyiv.

In Washington, there was fear that Russia’s angry rhetoric could transform into action.

Mr. Biden warned in a statement that “evolving intelligence” showed the “Russian government is exploring options for potential cyberattacks” against U.S. targets.

The statement did not elaborate on what exactly the intelligence revealed or what the U.S response might be.

Mr. Biden urged U.S. companies to accelerate efforts to protect themselves and said the federal government is willing to help them fend off Russian cyberattacks.

“My administration will continue to use every tool to deter, disrupt, and if necessary, respond to cyberattacks against critical infrastructure,” he said.

• David R. Sands, Jeff Mordock and Tom Howell Jr. contributed to this article, which is based in part on wire service reports.