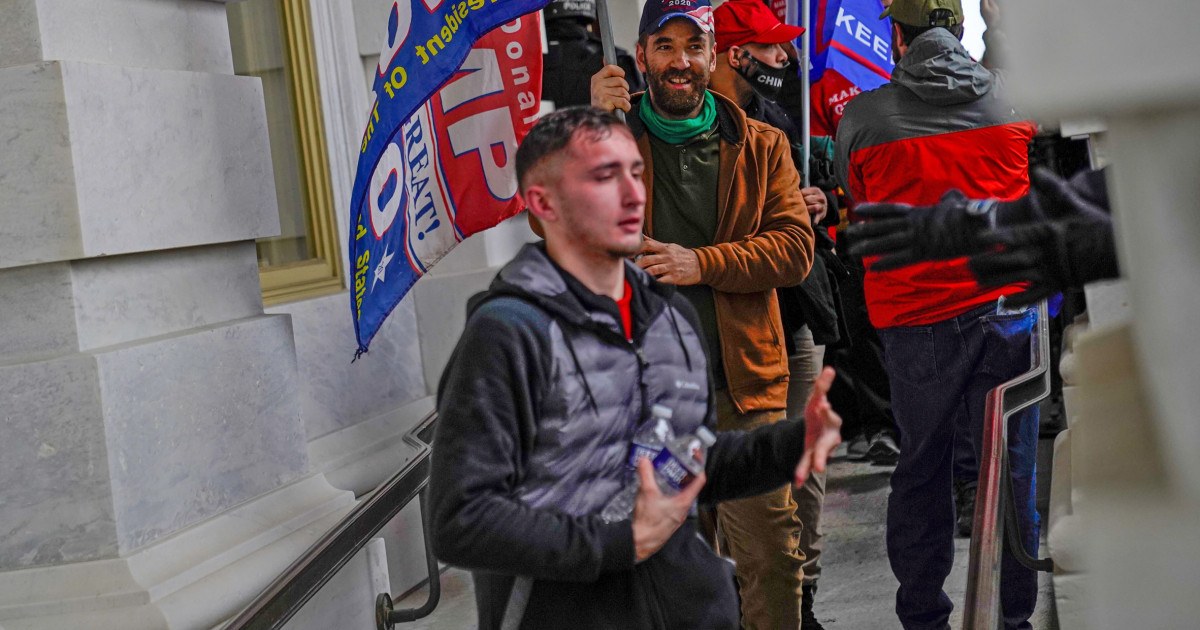 WASHINGTON — A supporter of Donald Trump accused of storming the Capitol during the Jan. 6 riot while facing a first-degree attempted murder charge was ordered released into the custody of his grandfather Wednesday.U.S. District Court Judge Carl Nichols said Matthew Beddingfield — who was seen in video footage using a flagpole with the American…

WASHINGTON — A supporter of Donald Trump accused of storming the Capitol during the Jan. 6 riot while facing a first-degree attempted murder charge was ordered released into the custody of his grandfather Wednesday.

U.S. District Court Judge Carl Nichols said Matthew Beddingfield — who was seen in video footage using a flagpole with the American flag to attack police on Jan. 6 — could be released into the custody of his grandfather, a military veteran who lives in rural North Carolina.

Nichols said he would have held Beddingfield until his trial had his grandfather not volunteered to serve as custodian.

“Were it not for Mr. Beddingfield’s relationship with his grandfather… this would be a relatively easy case,” Nichols said.

The government had asked Nichols to reverse the decision of a federal magistrate judge who had ordered Beddingfield released from pretrial detention into the custody of his grandfather.

Beddingfield, a North Carolina resident, was identified by online sleuths in March 2021 and arrested in February 2022. His attorneys have not disputed that he participated in the attack on the Capitol.

The Justice Department also alleges Beddingfield racially harassed social media users online after he took part in the Jan. 6 attack. And a federal prosecutor revealed during Wednesday’s hearing that a Capitol Police officer said Beddingfield used a flagpole to take aim at his genitals as police battled with rioters attempting to stop the certification of Joe Biden’s electoral college victory.

Upon release, Beddingfield will not be allowed to return to work for six weeks, Nichols said, to ensure he cannot go online. Beddingfield’s grandfather does not have home internet access.

Under his other conditions of release imposed by the magistrate judge, Beddingfield is not allowed to have a smart phone.

“I hope you’re hearing this loud and clear… if you screw up… I will look very disfavorably on that, and I will be very quick to revoke pretrial release and hold you pending trial,” Nichols told Beddingfield on Wednesday.

Video footage shows Beddingfield, 20, was among the first rioters to rush past the barricades, and that he was on the front lines during battles with police. At the time, he was subject to a 6 p.m. curfew in North Carolina since he was out on bail for an attempted murder charge.

Beddingfield eventually pleaded to a lesser charge in the attempted murder case, and was left with a suspended sentence and a violent felony on his record. He was arrested last month on charges related to the Jan. 6 riot when he showed up for a meeting with his probation officer.

A federal prosecutor argued Wednesday that there were no conditions of release that were appropriate in Beddingfield’s case, and detailed the Capitol Police officer’s account of facing off with Beddingfield during the attack, when the officer said Beddingfield attempted to use the flagpole to strike his genitals when he was not wearing a protective cup.

“He’s already shown that he can hit below the belt, as he did with that Capitol Police officer,” federal prosecutor Sean Murphy said.

Beddingfield, Murphy argued, previously demonstrated that he had no regard for court orders, having participated in the Jan. 6 attack while he was out on bail and then creating social media accounts even though he was prohibited from using such platforms.

Ryan J. Reilly is a Justice reporter for NBC News.