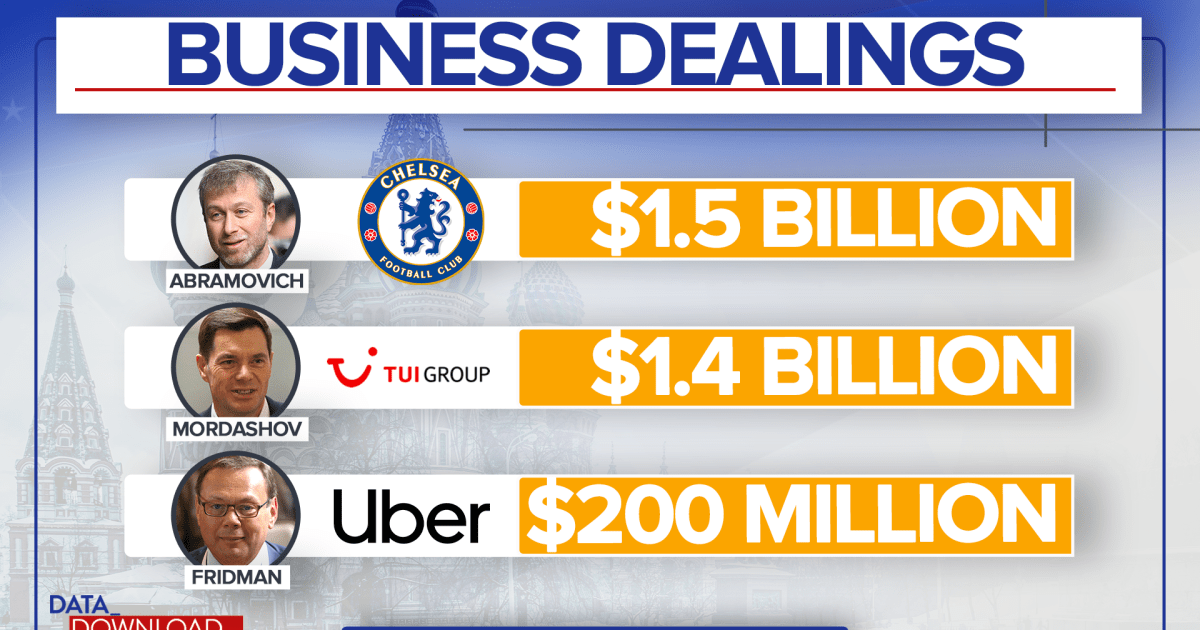 WASHINGTON — As Russia's military assault on Ukraine continues, several Western governments have begun to punish the country's wealthiest individuals, the oligarchs who’ve made billions of dollars doing business with President Vladimir Putin's government.From government officials to media CEOs to business moguls, a small cadre of individuals has seen their power and wealth grow in…

From government officials to media CEOs to business moguls, a small cadre of individuals has seen their power and wealth grow in Putin’s Russia, and they now face scrutiny and sanctions from governments and businesses around the world that are announcing plans to try and freeze their assets.

But tracking the wealth of Russia’s ruling class is not a simple thing. It is tied in with major businesses, institutions and pieces of land scattered across the globe. A look at the spread shows the challenges that will come with attempts to disentangle it.

Even getting a full accounting of the foreign investments of Russia’s oligarch is difficult, but forensic accounting and analyses offer some insights.

The Atlantic Council estimates there is $1 trillion in Russian “dark money” hidden in various countries and enterprises around the globe. Meanwhile, the National Bureau of Economic Research estimates that 60 percent of the wealth of Russia’s richest households is parked outside of the country’s borders.

The figures are all estimates because exact numbers are hard to gather. The money of Russia’s oligarchs is invested in varied ways and the amounts are staggering. Still, looking back over the last few decades, there’s a long list of examples that show just how widespread the money is, from sports to tourism to tech.

Russian billionaire Roman Abramovich purchased the English Premier League’s Chelsea Football Club in 2003 for about $90 million. The team is now worth billions. (This week the UK government froze Abramovich’s assets, meaning the team’s ownership is in a state of limbo.) On the European continent, Russian Alexei Mordashov was the single largest shareholder in German tourism giant TUI, with a stake worth roughly $1.4 billion, when Ukraine was invaded.

And the investments are in the United States, too. Russia’s Oleg Deripaska pledged $200 million to help build an aluminum plant in Kentucky in 2019, before suspending the investment in 2021. Meanwhile, back in 2016, Mikhail Fridman invested $200 million in what was the world’s most valuable private startup company, Uber. He sold his shares in 2019.

And those are just a few high-profile investments in the public eye. There are certainly scores of others, many of which are quieter and much harder to track.

And beyond business, there are the oligarchs’ real estate holdings across the world. When you’re a billionaire who travels, why not travel in style? But the properties the oligarchs own are more than simple pieds-à-terre — they are investments.

In fact, Russian real estate investments are spread so far and wide that trying to find them all is nearly impossible. Many U.S. cities have at least a few properties. Look online and you’ll find stories about oligarchs holding property in Miami, Los Angeles, Cleveland and Washington, D.C.

And with all that money and all that spending, Russian oligarchs have made connections with some well-known and powerful institutions in the United States. In a report on “reputation laundering” the Anti-Corruption Data Collective built a database of oligarchs and their gifts to the nation’s elite organizations.

The Massachusetts Institute of Technology has received at least $900,000 in donations from Russian oligarchs, according to the ACDC database. New York University has brought in more than $4 million. Brandeis has captured more than $10 million.

In Washington, the Kennedy Center has received more than $5 million from Russia’s billionaire class. The Mayo Clinic has collected at least $1 million, according to the database.

And that doesn’t begin to show the oligarchs’ impact, says David Szakonyi, one of the co-founders of the ACDC. There are scores of cases where the group knows there are gifts and donations, but there is no way to know how much.

And that’s true across the board with many of the investments of Russia’s oligarchs. The billionaires are not new to the scene. And as their wealth has grown, it has become more difficult to track. Walk down the street in a major city today and you may be walking by a property or business they own, or an institution they have endowed.

There might be a strong desire to punish the billionaires who have benefited from Vladimir Putin’s regime in Moscow, but carrying through on those desires is not going to be easy.

Dante Chinni is a contributor to NBC News specializing in data analysis around campaigns, politics and culture.