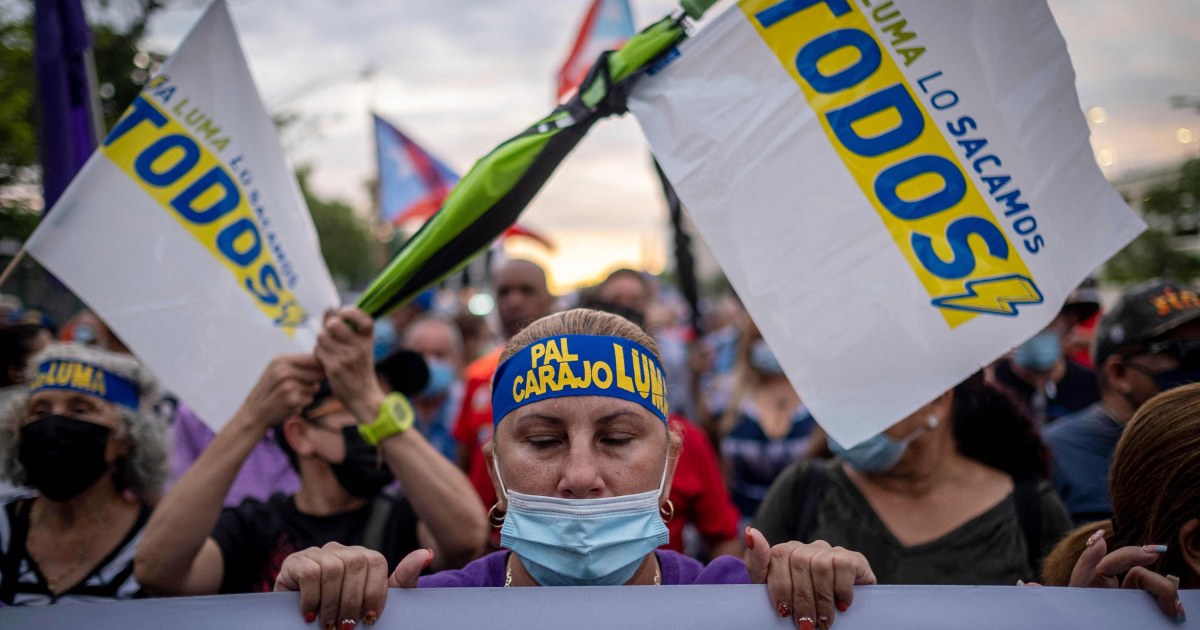 SAN JUAN, Puerto Rico — More than 4,000 people outraged over ongoing power outages in the U.S. territory of Puerto Rico marched Friday to decry how the lack of electricity has affected their health, work and children’s schooling.Many of them demanded the ouster of Luma, a private company that took over the island’s transmission and…

SAN JUAN, Puerto Rico — More than 4,000 people outraged over ongoing power outages in the U.S. territory of Puerto Rico marched Friday to decry how the lack of electricity has affected their health, work and children’s schooling.

Many demanded that Luma be removed from power distribution and transmission control of the island. Luma is a private company that took over on June 1. Others are also angry at Puerto Rico Electric Power Authority. It owns and operates generation units that have been failing in recent weeks, largely due to a lack maintenance and repair ..

“We’re tired of coming home and discovering that we have no lights,” said Mayra Rivera, 55, adding she is especially worried about her parents, who are in their 90s, and the sweltering heat they face at home.

Thousands marched down a main highway in the capital of San Juan as the sun set, blocking traffic. They held their cellphones high, blocking traffic and turning the highway into a sea o’ tiny lights. The highway was last shut down during large protests in 2019 that led to the resignation of the governor.

Some wore T-shirts that read, “Go to hell, Luma” as they clapped or banged on pots while walking behind huge speakers on pickups that blasted slogans such as, “My power went out, damn it, and now my fridge will be ruined.”

Among those marching was Juan Antonio Rivera, 78, who said the most recent outage left him in the dark this week for 43 hours. His computers were damaged by previous outages.

Power outages have occurred more frequently and lasted longer in recent months, with people complaining that they cannot give themselves respiratory therapies or have had to throw away insulin or food. Many people have also complained that they are unable or unwilling to work, that their children cannot attend classes online or that expensive appliances have been damaged.

Cicma Albino, a 56-year-old teacher from Guayama who drove more than an hour to participate in the demonstration, said outages affected her school for three days.

” We had to send them back,” she said about the students.

Outages can occur not only after generation units fail but also due to Luma’s selective blackouts that last for several hours after officials warn of excess demand.

One demonstrator, who was working as a lineman for Electric Power Authority, wore his work clothes with helmet and tool belt. He said he was angry at the outages because his mother is in bed.

Puerto Rico’s power grid has grown increasingly unstable after Hurricane Maria pummeled the island in September 2017 as a powerful Category 4 storm. The government announced on Thursday that the first federal funds were disbursed to the Electric Power Authority. This money is slated to be used for reconstruction. However, efforts to strengthen the grid are still not in place. This money is part of a total $9.5 billion that the U.S. Federal Emergency Management Agency has obligated to rebuild the grid.

The march comes on the same day that Luma announced it provided electricity for the first time to a community in the neighboring island of Culebra that had depended exclusively on generators or battery-operated solar panels. The company on Friday also was authorized to launch eight transmission and distribution reconstruction projects worth $117 million.