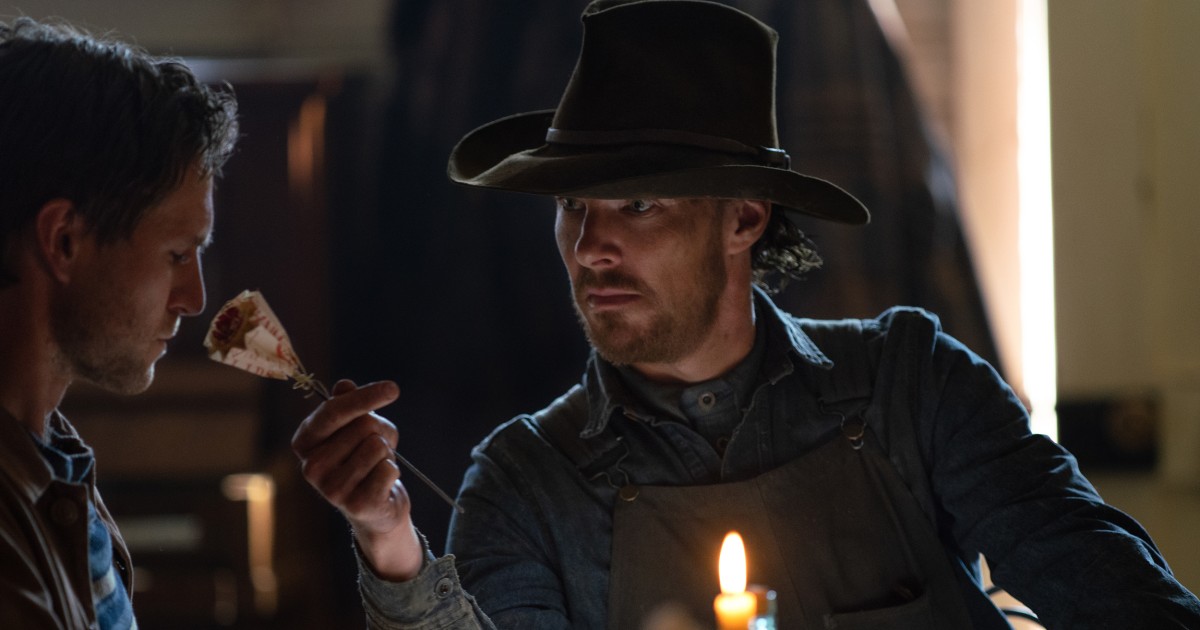 Jane Campion’s “The Power of the Dog” has been nominated for 12 Oscars, including best picture, best director, best actor (Benedict Cumberbatch) and best supporting actress (Kirsten Dunst).But one of its less high-profile nominations is also one of its most deserved: best adapted screenplay. Campion’s adaptation reworks and updates Thomas Savage’s 1967 novel, subtly shifting…

But one of its less high-profile nominations is also one of its most deserved: best adapted screenplay. Campion’s adaptation reworks and updates Thomas Savage’s 1967 novel, subtly shifting the narrative’s burden of guilt and hate. The book is a tale about generational revenge. The movie is, instead, about how toxic masculinity tightens around all of us like a poison rope.

One of its less high-profile nominations is also one of its most deserved: best adapted screenplay.

Thorough and complete spoilers below.

Rose starts drinking. She is especially upset when Phil starts to take Peter under his wing, teaching him to ride, and braiding a rope for him. Peter, to protect his mother, gives Phil anthrax-ridden cowhide to finish the rope. Phil dies, and, his shadow removed, Rose blossoms.

Campion makes two major changes to Savage’s source material. The first concerns Peter’s father and Rose’s first husband, Johnny. Johnny is largely absent from the movie; he isn’t even named. All we know about him is that he was a drunk, that he worried Peter was too strong and that he killed himself.

In the book, Johnny is developed more fully. He’s a kind, ambitious doctor with no business sense who helps patients even when they can’t pay and drowns his failure with alcohol. During one drinking bout, he gets into a fight with Phil, who thrashes him soundly. The humiliation and beating leads directly to Johnny’s increasing depression and ultimate suicide.

There’s no indication in the book that Peter knows Phil was involved in Johnny’s death. But it nonetheless provides a justification for the murder that follows. In the book, Phil kills the father and is murdered by the son. There’s a karmic justice there.

In the movie, Phil kills no one. He’s an abusive bully and a jerk, and he upsets Rose. But so does George, who despite her repeated protests and obvious embarrassment, insists she play the piano for a house party with the governor. Obviously, if Peter killed George for embarrassing his mom, that would be wrong. It’s wrong to kill Phil, too. Phil is terrible in many ways. But the only murderer in the film is Peter.

Campion also alters the book by making Phil’s homosexuality more legible — to viewers, but more important, to other characters. In the novel, Phil’s romantic relationship with his mentor, Bronco Henry, isn’t fully confirmed until the end of the novel. There is little suggestion that anyone else in the book realizes that Phil is gay.

In the movie, though, Phil’s adoration of Bronco Henry is signaled much earlier, and a number of other characters seem to notice. Phil tries to get George to toast Bronco Henry at the beginning of the film. George is reticent and uncomfortable, an indication perhaps that he remembers Phil’s relationship with Henry with some misgivings.

Peter knows more, and more surely. He finds a cache of Phil’s health magazines, which are filled with pictures of naked men. In a scene in the last part of the film, Phil tells Peter about a time Bronco Henry saved his life during a storm. The two men huddled together for warmth in a bed roll. Peter asks, knowingly, if they were lying together naked.

If others recognize that Phil is gay, the dynamic changes. Maybe Phil isn’t the only one motivated by toxic masculinity.

If Phil is successfully closeted, as in the book, the hate and fear he inspires is a reflection of his own actions and his own toxic masculinity. He calls Peter a sissy and gets other men to taunt him; he makes Rose feel unwelcome at every opportunity.

But if others recognize that Phil is gay, the dynamic changes. Maybe Phil isn’t the only one motivated by toxic masculinity.

In the film, Phil cruelly polices Peter’s gender performance — perhaps to publicly prove his own manhood. But what about Peter? Peter, too, is trying to be a man. And, like Phil, he’s proving his manliness in part by targeting someone who he may be reading as gay. The fact that Peter may find those men’s magazines attractive himself and may ask about naked Bronco Henry out of prurient interest only makes his own investment murkier.

Rose’s innocence is in question as well. If George suspects that his brother is gay, does his wife? Is her hyperbolic anger at Phil growing closer to Peter just about her dislike of Phil — or is it tinged with homophobia?

Campion’s adaptation doesn’t transform the story entirely. Phil is a sympathetic and complex villain in the novel, too. But by reducing Phil’s culpability, and increasing Peter’s, Campion changes the narratives’ thematic emphasis in important ways.

The film isn’t (just) about a repressed homosexual who enforces toxic masculinity in order to prove his manliness to himself. Nor is it about a son avenging his father. Instead, it’s a story about how patriarchy is a structure in which men (and women) police men (and women) with taunts, bullying, intimidation and even murder. Savage pointed to the diseased rope. But it took Campion’s adaptation to follow that rope to its end.