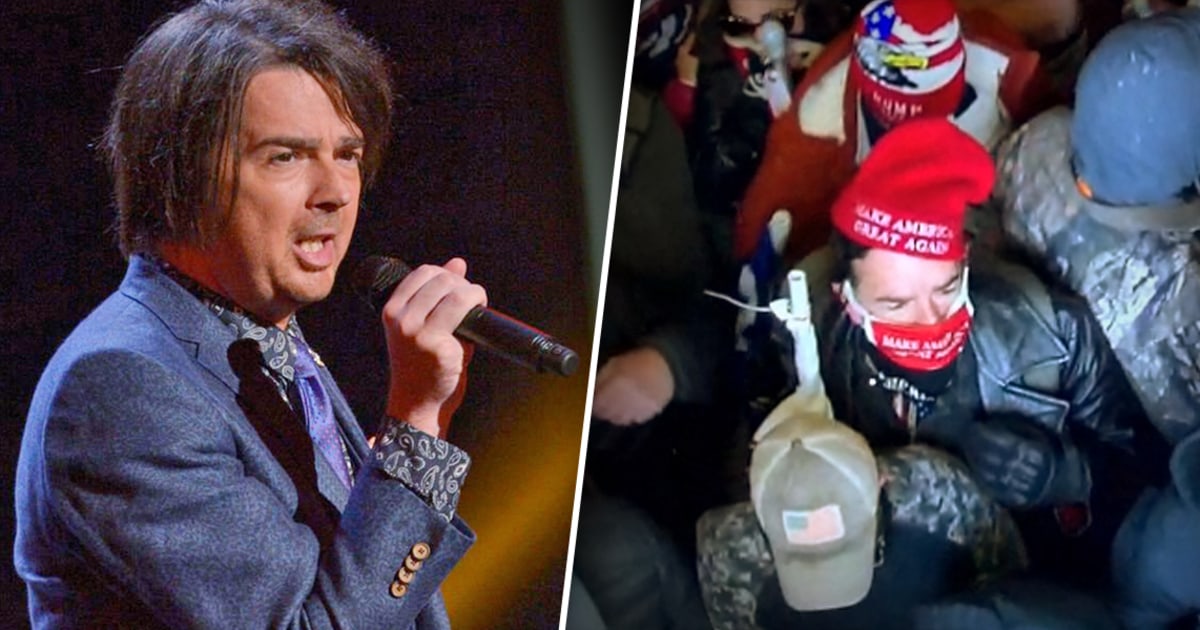 WASHINGTON — As the Jan. 6 committee prepares for a prime-time public hearing next week, the Justice Department is only a fraction of the way through one of the largest investigations in American history. The FBI has made about 850 arrests, and there are hundreds left to go.One person closely watching the news of Jan.…

WASHINGTON — As the Jan. 6 committee prepares for a prime-time public hearing next week, the Justice Department is only a fraction of the way through one of the largest investigations in American history. The FBI has made about 850 arrests, and there are hundreds left to go.

One person closely watching the news of Jan. 6 arrests is a right-wing comedian recently identified to the FBI by the online sleuths who have played a critical role in identifying people in hundreds of Capitol attack cases. The FBI does not comment on ongoing investigations, and an official declined to do so in this case.

Kevin Downey Jr. was one of the highest-profile participants to have entered the U.S. Capitol on Jan. 6; he appeared on “America’s Got Talent” on NBC in 2013 and was one of the men made over by the original Fab Five on Bravo’s “Queer Eye for the Straight Guy” in 2004. He also released at least one DVD special, “I’m Not Gay, but Don’t Stop,” in 2008. More recently, Downey has taken a turn as a pro-Trump commentator, writing for the right-wing website PJ Media and describing himself on Twitter as Kevin “Ultra MAGA” Downey Jr.

Downey is a public figure who has written extensively about the aftermath of the Jan. 6 attack. Three online sleuths confirmed to NBC News that Downey’s name has been submitted to the FBI, and the online network known as “Sedition Hunters,” which has published images of Jan. 6 participants, lists a photo of Downey as “identified.”

“Hopefully it will be the FBI, and not Downey, who gets the last laugh,” one online sleuth told NBC News.

Online sleuths say they identified Downey with the help of surveillance footage released in connection with another Jan. 6 case. After getting a facial recognition hit, confirming his identity was relatively easy, they said: Downey was traveling with a companion (his fiancee, according to his social media posts), and he also sent tweets both before and after the Jan. 6 attack, including one that told a Fox News personality to direct-message Downey if he wanted to “speak to someone that got inside the Capitol.”

NBC News also found photos that Downey posted of himself and his fiancee on Facebook on Jan. 6 that match the outfit the individual identified by the sleuths is seen wearing in the government surveillance footage inside the Capitol. That surveillance footage was released in connection with the trial of Dustin Thompson, a convicted Jan. 6 defendant who argued that Trump “authorized” the attack on the U.S. Capitol and that he was “following presidential orders.”

NBC News also found a YouTube interview in which Downey and his fiancee talked about their experiences at the Capitol, although they did not explicitly state that they entered the building.

Reached for comment Friday evening by NBC News, and informed that NBC News would be publishing this story, Downey hung up the phone.

“Oh,” he said, before hanging up. He did not respond to additional texts and voicemails seeking comment, nor did PJ Media.

Downey left an extensive online trail about his activities on Jan. 6, 2021. On Jan. 5, he replied to a Trump tweet, writing he was on his way to Trump’s rally.

“If you would like to speak to someone that got inside the Capitol please DM me,” he tweeted at Sean Hannity on Jan. 6.

(His companion, who is also a comedian, wrote that she “marched to the Capitol peacefully,” and that Trump didn’t incite violence, and sent another tweet saying she had “inside info regarding yesterday’s Capitol breech.”)

Downey, in a YouTube interview posted weeks after the insurrection, said that, while he loved Trump, his Jan. 6 speech was “a little boring.” In the interview, Downey described going to the Capitol and hearing tear gas canisters go off and recalled “some knuckleheads” climbing the walls of the building.

He also described when the mob rushed the building and that he saw people emerging from the Capitol covered in pepper spray.

“That’s when everyone pushed up, and people were pouring in the doors. They were going in, and they were coming out covered in tear gas or pepper spray,” he said. “There was a line in, and a line out.”

Downey said he “saw a mother-daughter go in” and “take a selfie.” Although he didn’t say that he went into the Capitol himself, the YouTube video could be fruitful for prosecutors seeking to illustrate that Downey knew he did not have permission to enter the Capitol building.

His fiancee, who joined him for part of the interview, defended her actions on Jan. 6.

“I knew exactly what I was doing when I waved that flag and walked all the way to the Capitol,” his fiancee said. “I was fighting for our country.”

She did not respond to a request for comment.

Since the insurrection, in between appearances at comedy clubs, Downey has been writing for PJ Media about Jan. 6 and what he sees as FBI overreach.

“Today’s FBI has enough time to sniff out every Capitol-related lead; chase every mother-daughter team that spent four minutes in the Capitol; and go after every granny, dozens of Long Island patriots, every off-duty police officer, and every other American who took a selfie in the Capitol,” Downey wrote.

He celebrated a judge’s acquittal of Matthew Martin, a defense contractor who admitted he entered the Capitol building through a door with a smashed-out window as alarms blared.

The total number of individuals who entered the Capitol tops 2,500, and the FBI is still seeking the identities of 350 individuals it says committed violent acts, per its website. The sprawling investigation has overwhelmed the Justice Department, which has asked Congress for more resources to go after people involved in Jan. 6. Online sleuths say they’ve identified hundreds more individuals who have not faced charges.

Among them is John Emanuel Banuelos, whom they identified to the FBI in February 2021. Months later, when he was arrested by local police for fatally stabbing a 19-year-old, Banuelos admitted to police that he had flashed a gun outside the Capitol on Jan. 6, though he did not enter the building. Prosecutors dropped the stabbing charges against Banuelos after he claimed self-defense; he has not been charged in connection with Jan. 6.

As for Downey, he appears to be sticking with conspiracy theories that surround Jan. 6. Recently, he’s been retweeting conspiracy theories about Ray Epps, who was on the grounds of the Capitol and is seen on video trying to separate more aggressive rioters from the police line but who never went inside and has not been charged. Unlike Jan. 6 defendant Stephen Ayres, who testified before the Jan. 6 committee, Downey doesn’t appear to have had a change of heart about the election.

“When election fraud is proven, will the Capitol ‘rioters’ be pardoned?” he asked last year.