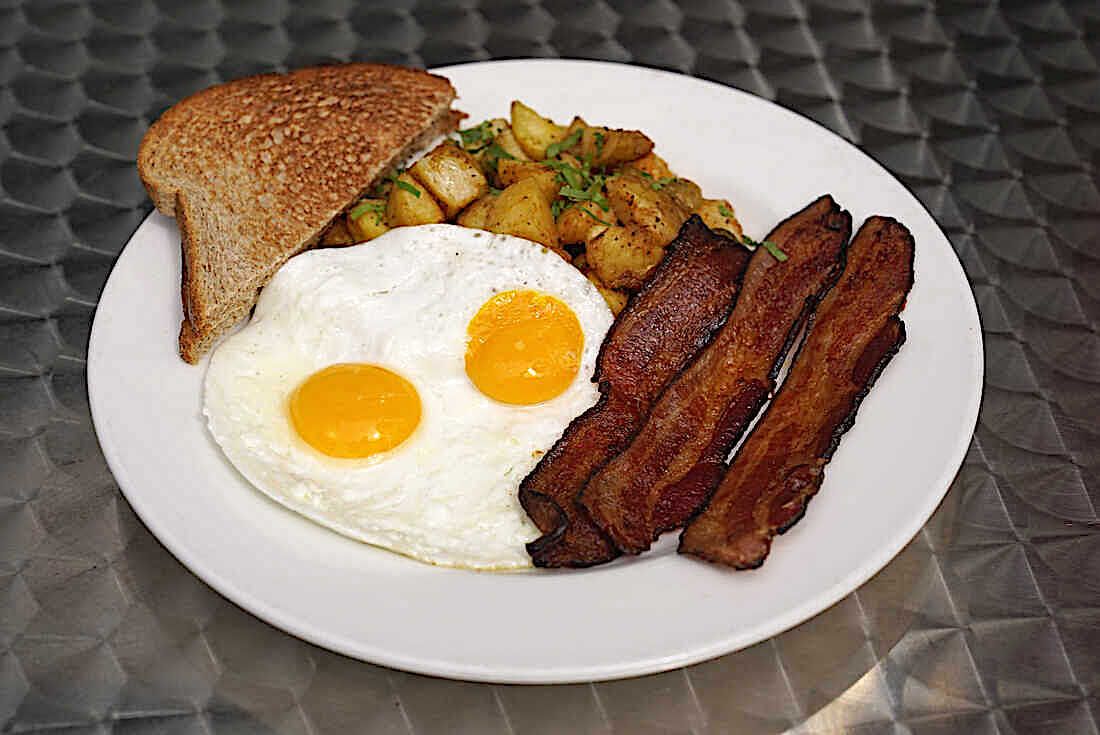 NEWS AND OPINION: Yes, there are some shocked faces down at the grocery store these days as shoppers experience sticker shock over the cost of familiar items that serve as a kind of everyday reassurance that things are OK. Like breakfast, for example. When did our much adored bacon start costing over $7 a pound?…

Yes, there are some shocked faces down at the grocery store these days as shoppers experience sticker shock over the cost of familiar items that serve as a kind of everyday reassurance that things are OK. Like breakfast, for example. When did our much adored bacon start costing over $7 a pound?

Needless to say, price increases during President Biden’s tenure in the White House are stunning. In case you wonder, here’s the percentages of increase on items for a classic American breakfast, according to the Consumer Price Index, released by the Bureau of Labor Statistics some 72 hours ago.

And for those who can’t do without them, the price of coffeecake and doughnuts is up by 10.6%. And oh yes — that fresh grapefruit is up by 16.1%.

If you’d like to track the jump of prices across the board, visit the Bureau at BLS.gov.

BLAME IT ON PUTIN

“It’s impossible for Biden to pretend it’s not happening or it’s all Putin’s fault. The Biden price hike is unmistakable and an anchor around the neck of every Democrat running in 2022,” Mr. Ashworth said.

IN A HOLDING PATTERN

As expected by fans of former President Donald Trump, the White House has rejected his proposal while in office to repaint Air Force One in a patriotic color scheme of red, white and blue.

The Air Force is currently in the process of replacing the current pair of presidential aircraft with two modified and upgraded Boeing 747-8 aircraft. It’s complicated, of course, and subject to “schedule risks,” according to a wide-ranging, 252-page report on U.S. military weapons systems by the Government Accountability Office.

There are multiple supply delays occurring, and challenges including the installation of 200 miles of specialized wire on each aircraft. Then there’s this:

“Boeing is experiencing aircraft mechanic workforce limitations due to a competitive labor market, according to VC-25B officials. They said that an additional limitation is lower-than-planned security clearance approval rates for skilled workers needed to modify the aircraft,” the report advised.

NOT YOUR PARENTS’ PARTY

So what’s the state of Democratic politics and outspoken Democrats at the moment? The word “unfamiliar” comes to mind.

“You listen to what they say, you watch what they burn and protest, you feel the economic pain and you realize this is not your parent’s Democrat Party. We now have liberal, Democratic cities like San Francisco recalling the crazy left-wing prosecutors because today’s Democratic Party has gone too far,” advises Saul Anuzis, former chairman of the Michigan Republican Party and now a commentator and consultant.

“You now have mothers, parents and grandparents leading civil revolutions at school board meetings and local elections as the crazy liberal Democrats push and shove their policies on mainstream America. You now have girls and young women standing up for their rights to compete fairly in sports and go to the bathroom in peace,” he continued.

“The crazy left of the Democratic Party is in charge, and they have gone too far. Elections have consequences and we’ve felt it on the streets of Minneapolis, Chicago, Seattle and elsewhere as our cities burned by ‘leftists’ who used the system to become millionaires,” he said, citing an increase in crime in particular following efforts to liberal efforts to “defund the police” and other factors.

“This is not your parent’s Democratic Party — and voters have had enough,” Mr. Anuzis concluded.

Those who monitor HBO’s traditionally liberal host Bill Maher got yet another indication that he has some conservative leanings. Here is what Mr. Maher had to say during a discussion of “media bias” and the attempted attack on Supreme Court Justice Brett Kavanaugh.

The host was concerned that the New York Times had buried this story on page 20 of its A-section.

“The New York Times buried this,” Mr. Maher told his audience. “If this had been a liberal Supreme Court justice that someone came to kill, it would’ve been on the front page. And that’s what is so disappointing about a paper like The New York Times. Because they wear their bias on their sleeves. And if it’s not part of something that feeds our narrative, they say ‘[expletive] it, we bury it.’”

• 40% of U.S. adults think mental health issues are the main cause of mass shootings in the U.S. by young people.

• 19% cite the availability of guns as the principal cause.

• 7% cite the influence of entertainment.