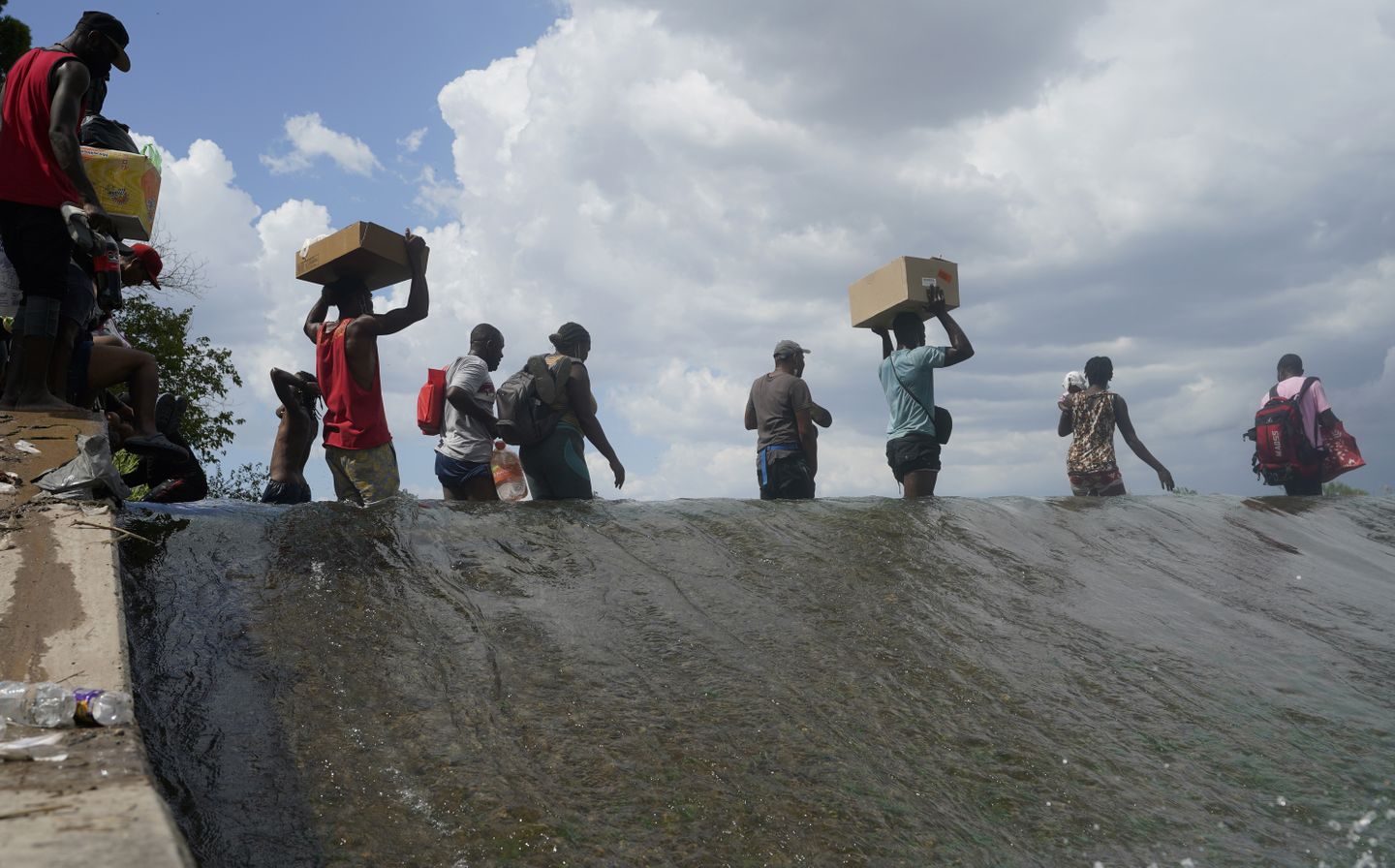 Texas state troopers used cars to erect a wall of metal this weekend, sealing off the U.S.-Mexico border in Del Rio, and the Homeland Security Department said it was rushing agents and officers to the site to process the thousands of migrants who had made it across, as officials moved on what has become an…

Texas state troopers used cars to erect a wall of metal this weekend, sealing off the U.S.-Mexico border in Del Rio, and the Homeland Security Department said it was rushing agents and officers to the site to process the thousands of migrants who had made it across, as officials moved on what has become an illegal immigrant beachhead inside the country.

Homeland Security also vowed more deportation flights and use of expedited removal, a speedy deportation process, to try to oust as many of the migrants, most of them Haitians, from the camp they erected on the banks of the Rio Grande.

With the stream of new migrants cut off, authorities whittled down the numbers from a peak of about 16,000 people late last week to fewer than 13,000 Sunday afternoon.

Todd Bensman, senior national security fellow at the Center for Immigration Studies, who has been observing the scene on the ground for several days, said the Biden administration is desperate to get the numbers to a manageable level before those in the camp grow unruly.

“They actually are genuinely fearful there will be a big riot,” he said.

The chaotic scene forced the feds to close the border crossing late Friday after a day’s dithering.

Texas Gov. Greg Abbott said he thought officials agreed to shut the port of entry Thursday, only to have Customs and Border Protection deny any knowledge about it.

Mr. Abbott said Sunday that he deployed the National Guard and state troopers to seal off the shore of the Rio Grande, and it was working.

“More Law Enforcement & National Guard are added daily to secure the region from the potential influx of illegal immigrants,” the governor said on Twitter.

The Biden team has also started talking tough. It said it was looking to ramp up deportation flights to Haiti and work with countries where the Haitians may have lived before making the journey to the U.S. The hope is to get those nations to take back the Haitians.

Many of the Haitians had been living in countries such as Brazil and Argentina, not Haiti, and saw the Biden administration’s more relaxed approach to immigration enforcement as an invitation to try to jump the border.

Homeland Security said it’s trying to send a message that the border isn’t open and people shouldn’t make the attempt.

“Individuals and families are subject to border restrictions, including expulsion. Irregular migration poses a significant threat to the health and welfare of border communities and to the lives of migrants themselves, and should not be attempted,” the department said in an unsigned statement Saturday.

It’s not clear whether those words will be met with action.

Deporting many of the Haitians to Haiti seems a tough prospect, particularly because the Biden administration last month declared that country so unstable that it was granting a deportation amnesty to Haitians already in the U.S.

Analysts said it’s just as likely the Haitians will be processed, make iffy asylum claims and be released to pursue those claims in coming years.

In addition to Haitians, some Venezuelans and Cubans were in the camp, which sprang up as numbers of migrants became too overwhelming for Border Patrol agents to handle.

Those in the camp were waiting their turn for agents to arrest them.

The reasons for the sudden surge are murky, though Mr. Bensman said he got some clues during his time in Ciudad Acuna, across the river from Del Rio.

He said migrants told him they had been held in a camp at Mexico’s southern border for months before Mexican authorities suddenly said they were free to go.

So go, they did — heading north to the U.S., which had been their destination all along.

They ended up in Ciudad Acuna because the cartels in the city don’t control the human smuggling across the river the way cartels do along much of the rest of the border, Mr. Bensman wrote in an analysis.

Those who reach the city are free to swim across the Rio Grande without worrying about harassment or paying the “piso,” or crossing fee, collected by cartels elsewhere. That fee can run upwards of $1,000.

The migrant beachhead was the latest test for the Biden administration, which is still struggling to find its footing on immigration and border issues. The administration erased a network of get-tough policies that the Trump team had put into place, and migrants reacted by coming in unprecedented numbers.

If September stays on pace, fiscal year 2021 will rival the all-time record for illegal immigrants caught at the border.

Former President Donald Trump weighed in Sunday. He wondered why National Guard troops were deployed in Washington to handle security at a pro-Trump rally at the Capitol rather than deployed to Del Rio.

“The largest number of illegal aliens in the history of our Country are pouring in by the millions. They are totally unchecked and unvetted, can do whatever they want, and go wherever they want,” the former president said, asserting that the U.S. “is rapidly becoming a cesspool of humanity.”

He said the press wasn’t giving enough attention to what he called the “greatest crisis in the history of our country.”