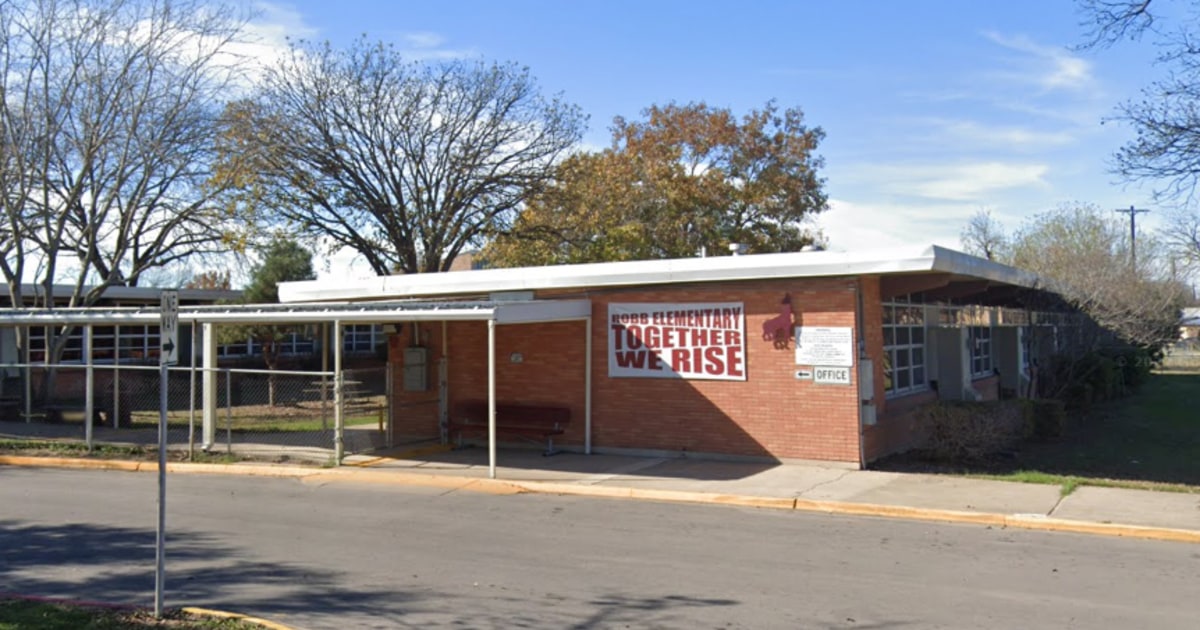 UVALDE, Texas — At least fourteen children and an adult were killed Tuesday when a gunman opened fire in a Texas elementary school, Gov. Greg Abbott said.The suspected shooter, who might have had a handgun and a rifle, was fatally wounded in the law enforcement response to the attack at Robb Elementary School in Uvalde,…

UVALDE, Texas — At least fourteen children and an adult were killed Tuesday when a gunman opened fire in a Texas elementary school, Gov. Greg Abbott said.

The suspected shooter, who might have had a handgun and a rifle, was fatally wounded in the law enforcement response to the attack at Robb Elementary School in Uvalde, about 83 miles west of San Antonio, he said.

“It is believed that he abandoned his vehicle, then entered into the Robb Elementary School in Uvalde with a handgun, and he may have also had a rifle,” Abbott said at a news briefing.

“He shot and killed, horrifically and incomprehensibly, 14 students and killed a teacher,” the governor said.

Multiple survivors — the exact number was unknown — were being treated at regional hospitals.

It was yet another mass shooting targeting children and educators at an American school campus.

It might have particular resonance for those shaken by the Dec. 14, 2012 attack at Sandy Hook Elementary School in Newtown, Connecticut, when a 20-year-old man killed 20 children and six adults.

Suspect acted alone, may have shot his grandmother

“The investigation is leading to tell us the suspect did act alone during this heinous crime,” Pete Arredondo, the chief of police for the Uvalde Consolidated Independent School District, said at a news conference.

Two senior law enforcement officials briefed on the shooting said investigators were trying to determine whether the suspect also shot his grandmother before the incident.

FBI agents and Customs and Border Protection personnel were assisting local law enforcement with the investigation into the suspect’s motives and background, authorities said. Uvalde is about 70 miles from the port at Del Rio.

Meanwhile, families of the deceased were being notified, the governor said.

Amid the chaos, parents were searching for children they hadn’t heard from. One mother, Maria Garcia, was near the school questioning a law enforcement officer early in the afternoon because she was still looking for her 10-year-old daughter.

Her voice quivered as she tried to get answers to her string of questions, suggesting maybe her daughter was hiding in fields nearby.

Rosa Arizmendia and Roland Arizmendia’s daughter was safe, they said, because they had picked her up early after an awards ceremony at the school. But they didn’t know where their niece was.

They had seen her when they picked up their daughter, and Roland Arizmendia said he yelled out, “Hi, mija!” to her. But he hadn’t heard news of her since the shooting, and their whole family was searching for her.

“It’s like a horror movie,” Rosa Arizmendia said. “If it’s not our kid, someone we know. It’s our neighbors.”

He asked when the America as a collective would stand up and support limits on powerful weapons and buyers with ill intent after yet another school shooting has claimed the lives of “beautiful, innocent second, third, fourth graders.”

The president, who lost a young daughter, Naomi, in a car crash and adult son Beau to a brain tumor, said he knows the pain of parents in Uvalde whose children will never return home. “May God bless the loss of innocent life on this sad day,” he said.

On Tuesday evening, Biden ordered flags to be flown at half-staff at federal buildings and military posts through Saturday.

Four patients have been released. Two, described only as a male and a female, were dead on arrival, Nordwick said.

Two officers were struck when they apparently exchanged gunfire with the shooter and had injuries not thought to be life-threatening, Abbott said.

Brooke Army Medical Center at Joint Base San Antonio-Fort Sam Houston said it was treating two adult victims who were in critical condition.

The community of Uvalde

The school serves second through fourth grades in a city that is nearly half non-English speaking, according to the U.S. Census Bureau.

Uvalde Consolidated Independent School District initially announced on Twitter that there was “an active shooter” at the elementary school.

“Law enforcement is on site. Your cooperation is needed at this time by not visiting the campus. As soon as more information is gathered it will be shared,” the tweet said.

The Uvalde Police Department urged the public to avoid the area.

Students were being taken to Uvalde High School for reunification with parents, police and the school district said. But the district asked parents not to pick up their children. “You will be notified to pick up students once all are accounted for,” an update from the district said.

District Superintendent Hal Harrell said the school year, which was scheduled to end Thursday, is over.

“My heart was broken today,” Harrell said at a news conference Tuesday evening. “We’re a small community, and we’ll need your prayers to get through this.”

Uvalde, incorporated in 1888 as a ranch and crossroads town, has a population of 8,921, according to the census.

According to district data, almost 90 percent of Robb Elementary School’s 574 students are Latino, while almost 9 percent are white.

About 87 percent of the students are considered economically disadvantaged.

The shooting occurred after new FBI statistics released Monday showed active shooter incidents in 2021 surged by more than 50 percent from 2020 and by nearly 97 percent from 2017.