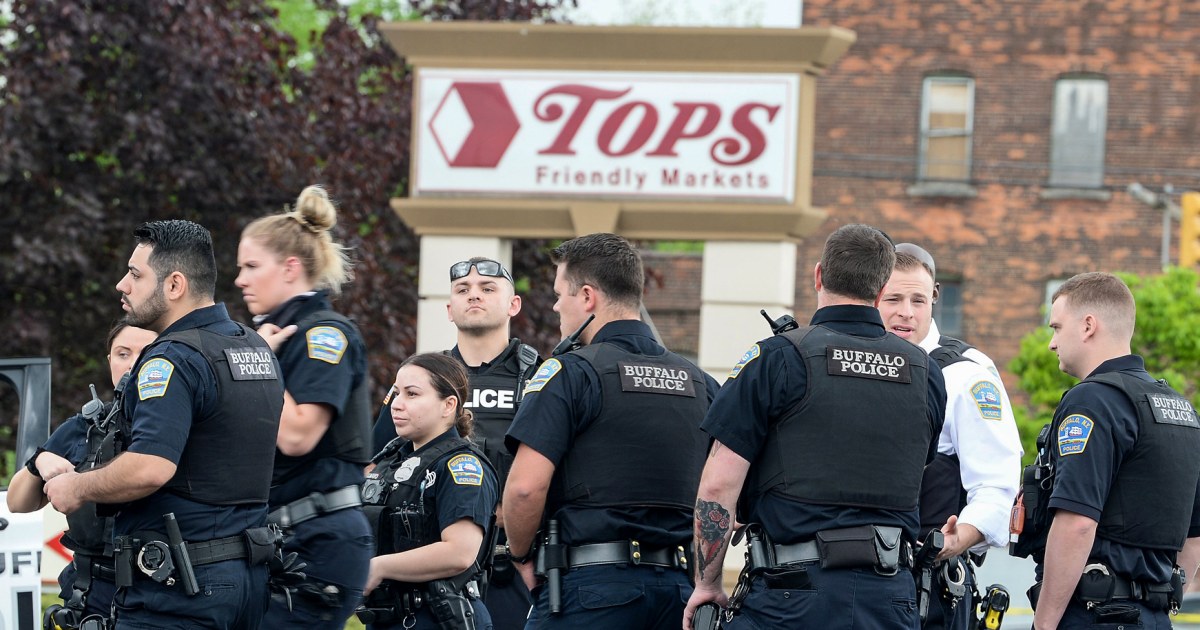 The 18-year-old man suspected of killing 10 people and injuring three others at a Buffalo, New York, supermarket on Saturday had been previously investigated for making a violent statement. Payton Gendron was investigated by New York State Police last year for making a threatening statement in June, when he was a minor, a law enforcement…

The 18-year-old man suspected of killing 10 people and injuring three others at a Buffalo, New York, supermarket on Saturday had been previously investigated for making a violent statement.

A state police spokesman, who did not release a name to NBC News, said the subject of the investigation had been transported to the hospital for a mental health evaluation at the time and was not charged with a crime.

Buffalo Police Commissioner Joseph Gramaglia said that the suspect was evaluated and released and no further complaints were made.

He added that police are limited in how far they can take investigations and in monitoring social media, saying not everything constitutes a violation of the law.

Gramaglia said it would be a “lengthy” investigation on both the federal and local levels. He called the attack — in which 11 of 13 people who were shot were Black — a clear hate crime.

“The evidence we uncovered so far makes no mistake that this is an absolute racist hate crime,” Gramaglia said. “It will be prosecuted as a hate crime. This is someone who has hate in their heart, soul and mind.”

New York Gov. Kathy Hochul said at the news conference that the suspect was investigated before her time in office and that she would look for answers into what happened.

“I understand the First Amendment rights very well. I have no intention of impinging upon them,” Hochul said. “However, hate speech is not protected. … There are parameters if you’re going to be inciting people to violence. That’s not protected.”

Officials said the suspect streamed the attack on Twitch, a platform used by gamers to livestream as they play. A Twitch spokesperson confirmed that the stream was removed “less than two minutes after the violence started.”

The assault-style rifle used in the attack was legally purchased in New York, a senior law enforcement official said. A hunting rifle and a shotgun were also found at the scene.

In addition to the guns, the suspect had multiple 30-round magazines on him, the official said. Ammunition magazines that hold more than seven bullets were outlawed in New York state in 2013 as part of larger gun control legislation.

It’s unclear where the suspect obtained the 30-round magazines.

A search warrant was granted for state officials Saturday night, but investigators held off searching the suspect’s home until a federal warrant could also be issued Sunday morning.

A judge remanded the suspect into custody without bail at his arraignment Saturday evening in Buffalo City Court on one count of first-degree murder. A felony hearing was scheduled for Thursday morning.

Erie County Sheriff John Garcia said the suspect is being monitored continuously on suicide watch and will be given mental health services as needed.

A senior law enforcement official said authorities are working to authenticate a racist “manifesto” posted last week that included the suspect’s personal information. NBC News confirmed that the document was posted to Google Docs two days before the shooting.

In the posted document, the suspect appears to describe himself as a racist, a white supremacist and an antisemite. The document espouses the “great replacement” conspiracy theory frequently pushed by white supremacists that claims white Americans are in danger of being “replaced” by nonwhite immigrants.

Jennifer Tookes was inside the Tops supermarket when she heard shots ring out from the front of the store. She ran through the deli, exiting through two doors, as she heard the gunman make his way to the back of the store.

Tookes said she saw “three bodies lying outside in the parking lot” as she made her way outside.

When she got to her car, Tookes said, she tried to call her cousin who was shopping with her at the time. They had separated and were in different aisles when the shots rang out.

She said she later learned that her cousin had hidden in the store’s freezer until the gunfire stopped.

“I’ll have this in my head for the rest of my life,” Tookes said. “I don’t know if I’ll ever be able to go into a grocery store or a store.”

Jonathan Dienst is a reporter for WNBC-TV in New York, leading its investigative reporting team and covering justice and law enforcement issues.