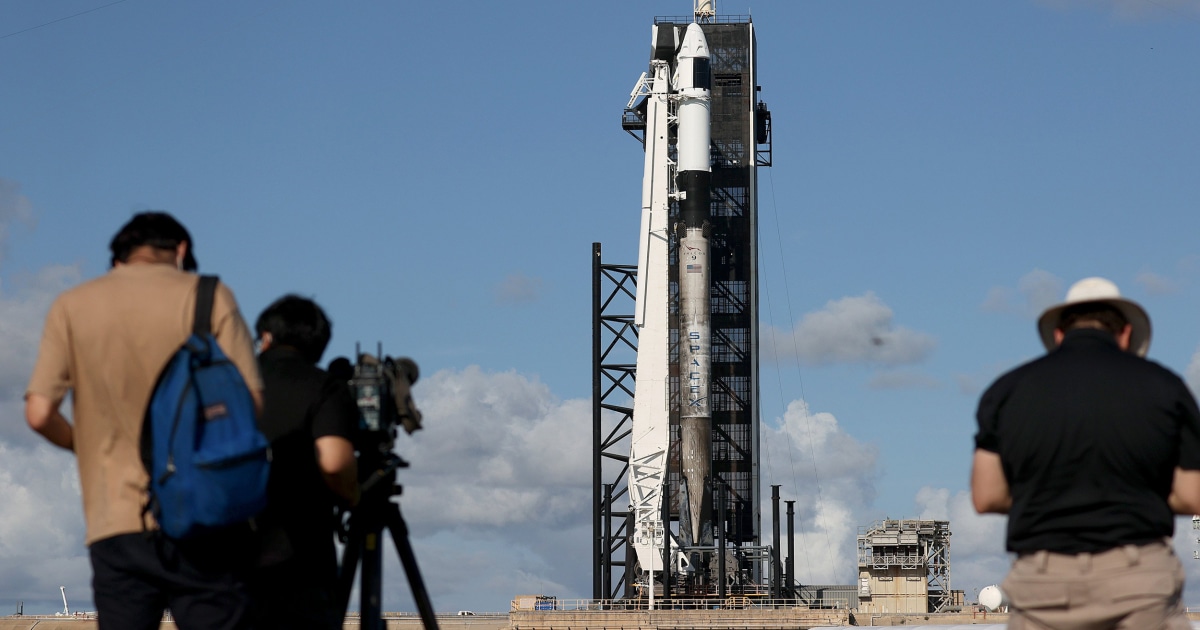 A reusable Falcon 9 rocket carrying Jared Isaacman, a 38-year-old tech entrepreneur, Sian Proctor, a 51-year-old geoscientist, Chris Sembroski, a 42-year-old aerospace data engineer, and Hayley Arceneaux, a 29-year-old physician assistant, lifted off shortly after 8 p.m. EDT from Cape Canaveral, Florida. After three days in orbit around Earth, the four-person crew will return to Earth and splash down in the Atlantic Ocean.

Although it is not the first time private passengers have paid for space travel, the so-called Inspiration4 mission was the first to orbit the Earth without professional astronauts. This historic flight is the next step in human spaceflight’s evolution. Access to the cosmos has expanded beyond governments and their space agencies.

” The door is open,” Isaacman declared as he and his crew reached space.

SpaceX’s rocket burst into the night sky at the same launch site as NASA’s Apollo lunar missions and the first and final space shuttle flights. Crew members celebrated each milestone as they ascended into orbit and displayed thumbs-up signs.

Isaacman was the founder and CEO Shift4 Payments. This Pennsylvania-based payment processing firm charged an undisclosed amount for the three-day adventure in SpaceX’s Crew Dragon capsule. The Inspiration4 mission was part of a charity initiative to raise funds for St. Jude Children’s Research Hospital. In addition to giving $100 million to St. Jude, Isaacman donated the three other seats on the Inspiration4 flight to his crew members.

“This dream began 10 months ago,” Isaacman said Tuesday in a preflight briefing. “We set out from the start to deliver a very inspiring message, certainly what can be done up in space and the possibilities there, but also what we can accomplish here on Earth.”

The Crew Dragon spacecraft will circle the planet 15 times each day from an altitude of nearly 360 miles, higher than the current orbits of the space station and the Hubble Space Telescope, according to SpaceX. The Inspiration4 mission will be similar to SpaceX’s routine flights towards the International Space Station. However, the capsule won’t dock at the orbiting laboratory. As such, the company added a new glass dome to the top of the spacecraft for 360-degree views.

NASA was quick to congratulate the Inspiration4 team Wednesday, tweeting that the launch “represents a significant milestone in the quest to make space for everybody. “

The successful launch of the Inspiration4 mission was a significant milestone for SpaceX, and a boon to the growing space tourism industry. Two months ago, rival billionaires Jeff Bezos and Richard Branson launched to the edge space in vehicles built by their respective aerospace companies. Although the flights were only suborbital, Blue Origin’s Bezos and Virgin Galactic’s Branson plan to offer space tourists orbital joyrides in the future.

These pioneering flights — for now, limited to those who can afford to spend millions of dollars on a ticket — could accelerate the expansion of private spaceflight, making trips to space more regular, and eventually more affordable.

The first space tourist, American multimillionaire Dennis Tito, launched to the International Space Station on an eight-day expedition in 2001. Tito reportedly paid $20 million to fly to the orbiting outpost aboard a Russian Soyuz spacecraft. Only seven civilians had ever paid to fly into space, including Tito.

Proctor won her ticket to space via an online contest run by Shift4 Payments, while Sembroski was awarded a seat in a charity drive for St. Jude.

The crew members have called their journey a “humanitarian mission,” and have spoken about how they hope to inspire people around the world.

“I want to thank everyone for all the support, encouragement, and love,” Arceneaux tweeted Wednesday, mere hours before the launch. “And thank-you to @StJude because that’s what brought me here today. This post is for anyone who has ever experienced something difficult. I’m sure we have all. Keep your fingers crossed for better days .”

The Inspiration4 flight is only the beginning of SpaceX’s plans to launch paying customers into space. Earlier this year, the company announced that the first private space station crew, led by former NASA astronaut Michael Lopez-Alegria, will launch to the orbiting lab in early 2022. Lopez-Alegria will be joined by three men who are each paying $55 million to spend eight days at the space station.

In 2018, SpaceX also said Japanese billionaire Yusaku Maezawa, founder and CEO of the fashion retailer Zozo, would be the first private passenger to fly around the moon on a mission that is planned for sometime in 2023.