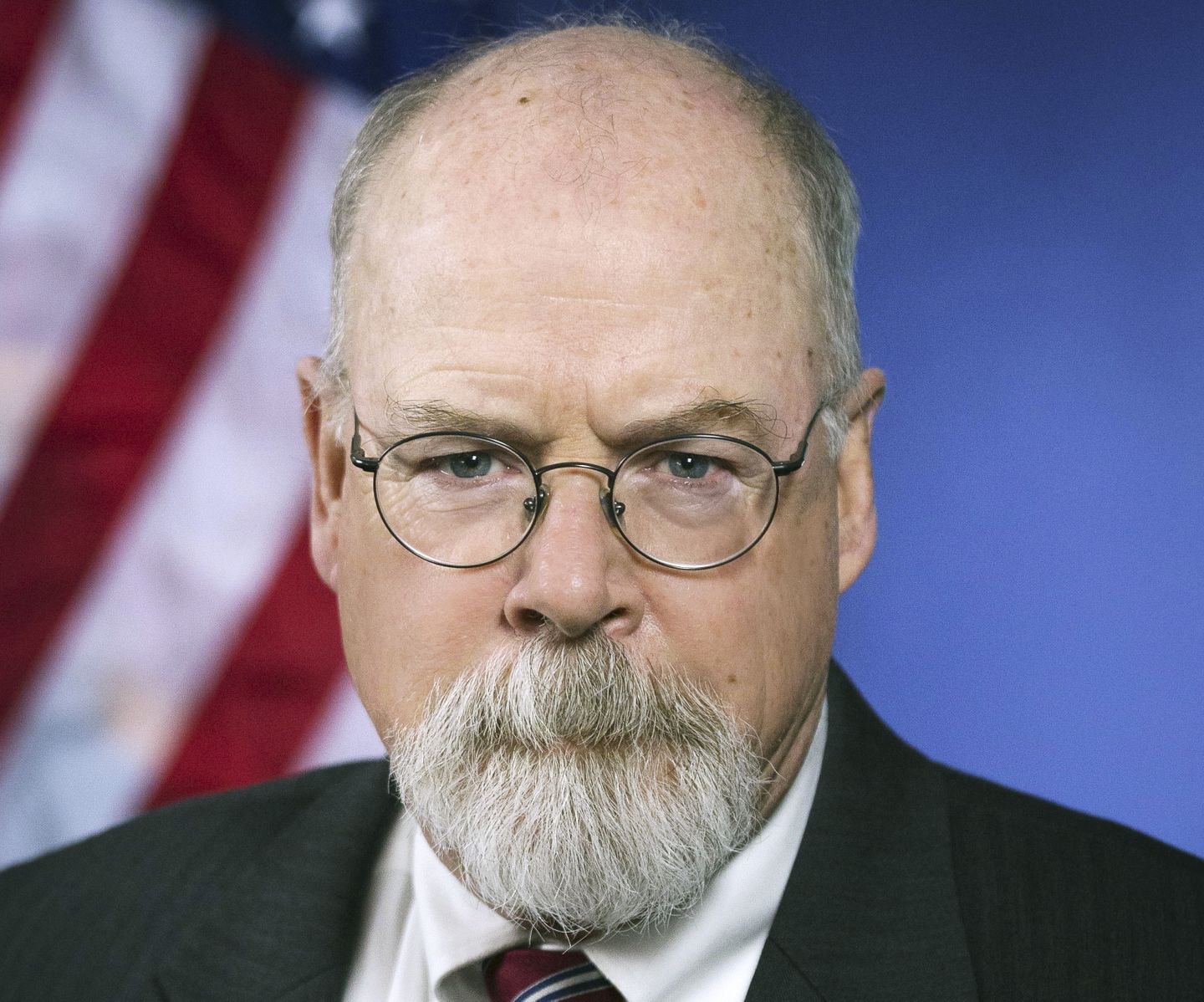 Charles H. Dolan Jr., the Clinton insider who secretly supplied information for the Democratic-financed anti-Trump dossier, was also the official spokesman for a Russian company that the dossier falsely accused of hacking the Democratic Party’s computers during the 2016 presidential campaign. The odd situation came about through the dossier’s main source, Igor Danchenko. Special counsel…

Charles H. Dolan Jr., the Clinton insider who secretly supplied information for the Democratic-financed anti-Trump dossier, was also the official spokesman for a Russian company that the dossier falsely accused of hacking the Democratic Party‘s computers during the 2016 presidential campaign.

The bizarre situation was created by the dossier’s main source Igor Danchenko . Special counsel John Durham on Thursday unsealed an indictment against Mr. Danchenko, accusing the Russian analyst of lying to FBI agents about how he compiled the dossier’s unverified allegations against candidate Donald Trump in 2016.

Mr. Durham is investigating the origins of the FBI investigation into Mr. Trump and his associates.

The dossier, created by British former spy Christopher Steele, accused XBT Holdings in Cyprus and owner Aleksej Gubarev of organizing the Russian hacking of Democratic Party computers. Mr. Gubarev, a high-tech entrepreneur, sued Mr. Steele and BuzzFeed, which published the dossier in January 2017. No official investigation has found Mr. Gubarev had any role in the Russian government’s hacking of Democratic Party computers.

During the BuzzFeed court case in Florida, Mr. Dolan, a dossier source, issued statements on Mr. Gubarev’s behalf to reporters.

The Durham indictment disclosed for the first time the role of Clinton-connected Mr. Dolan, identified as PR Executive-1.

Ralph Martin, his attorney, confirmed that the PR executive named in the indictment is Mr. Dolan, whom he described as a witness.

“Chuck understands and appreciates your interest,” Mr. Martin told CNBC. “I can confirm that he’s PR Executive-1 in this indictment. As he is a witness in an ongoing case, it would not be appropriate for Chuck to comment further on the allegations in the indictment at this time.”

Mr. Dolan met Mr. Danchenko through a scholar at the Brookings Institution. They established communication and met in Moscow where they do business. During the friendship, Mr. Dolan contributed to four major dossier claims, the indictment implies, including the widely circulated but unverified tale of Mr. Trump cavorting with prostitutes in a Moscow hotel room.

The indictment also says Mr. Dolan contributed information that ended up in Mr. Steele‘s final product on why Paul Manafort was fired by the Trump campaign in August 2016, the reason a Russian diplomat in the Washington embassy returned to Moscow, and why Russian President Vladimir Putin fired his chief of staff.

“Certain allegations that Danchenko provided to [Mr. Steele] and which appeared in the [dossier] mirrored and/or reflected information that [Mr. Dolan] himself also had received through his own interactions with Russian nationals,” the indictment states.

XBT Holdings was identified in the indictment as “Business 1”, which states that the company was mentioned within the dossier. The indictment also says Mr. Danchenko brokered a meeting between his main dossier source, identified as “Sub-Source-1,” and Mr. Dolan.

The Wall Street Journal in 2020 identified Mr. Danchenko’s main source as Russian Olga Galkina, who in 2016 was employed by Mr. Gubarev and XBT Holdings. She is also connected to several Moscow press operations. She denied that she was a Danchenko source.

When the dossier came out in January 2017 and Mr. Steele was unmasked as the author, Mr. Dolan sent an email to a friend saying, “My client … has been accused of being the party that organized the hacking.” That is what the dossier said about Mr. Gubarev.

Mr. Dolan stated he was in London “presently speaking with” lawyers preparing a lawsuit against Mr. Steele. London lawyers representing Mr. Gubarev did file and prepare such a complaint. The meeting means the lawyers were conferring with a Gubarev confidant who had supplied dossier information to Mr. Danchenko.

Mr. Dolan said in that email that he was aware that Mr. Danchenko had authored dossier claims.

Mr. Dolan has long ties to former President Bill Clinton and former secretary of state and 2016 Democratic candidate Hillary Clinton. He was the state director for two of Mr. Clinton’s presidential campaigns, as well as a political appointee to the State Department and adviser to Mrs. Clinton. The special prosecutor’s offices told him that he didn’t know the campaign was working with Mr. Danchenko.

“In all fairness, it looks like Chuck Dolan had no idea that Danchenko was working on the dossier when he was communicating with Danchenko, and we didn’t know that anything originating from Dolan ended up in the dossier,” Mr. Gurvits said.

“Also, I think the evidence now is quite compelling that the allegations about Gubarev and his companies were invented by Danchenko. As it turned out, Chuck Dolan was introduced to my clients through Danchenko, and Danchenko, according to the indictment, would take some facts, embellish and embroider them, and present them as the product of his own research to Steele.

The “only question,” Mr. Gurvits added, is: “To what extent did Christopher Steele collaborate with Danchenko in inventing material for the dossier? I am certain that Steele intentionally failed to verify any allegations. But did he also participate in manufacturing them?”

The Washington Times has reached out to Mr. Steele for comment.

Interviewed by ABC News’ George Stephanopoulos last month, Mr. Steele said, “I stand by the work we did, the sources that we had, and the professionalism which we applied to it.”

The dossier has been widely debunked by the FBI and congressional investigators. Peter Strzok, who led the FBI probe, told The Atlantic that the dossier was a mix of inaccuracies and disinformation. The final report by former special counsel Robert Mueller said the inquiry did not establish a Trump-Russia conspiracy, as Mr. Steele alleged.

The former British spy’s work was financed by the Democratic Party and the Clinton campaign, who widely distributed the allegations to the FBI, other agencies and news media.

As the BuzzFeed defamation case played out in a Florida courtroom in 2017, Mr. Dolan did the PR.

After Mr. Gubarev lost a bid in December 2017 to have the judge order BuzzFeed to reveal who gave it the dossier, Mr. Dolan was quoted in The Washington Times:

“Because we obtained the information about BuzzFeed‘s source from the source itself, we were in the process of withdrawing our motion to compel BuzzFeed to reveal their source. The judge in Miami denied our motion to compel. His reasoning was that we did not yet exhaust all other possible ways to get the information. BuzzFeed is trying to use this ruling as a positive development, which it is not.”

In February 2017, when Mr. Gubarev’s U.S. lawyers announced the lawsuit, the press release listed Mr. Dolan as the contact for “more information.” A judge dismissed the lawsuit on grounds that the dossier was a legitimate news story given that the FBI relied on it.

Mr. Gurvits stated to The Times that he considers the Danchenko Indictment further evidence that the dossier allegation about his company was totally bogus.

“We’re celebrating this indictment because it serves yet another vindication of Aleksej Gubarev and his companies and because yet another cog in the creation of the dossier is shown to be a liar.”