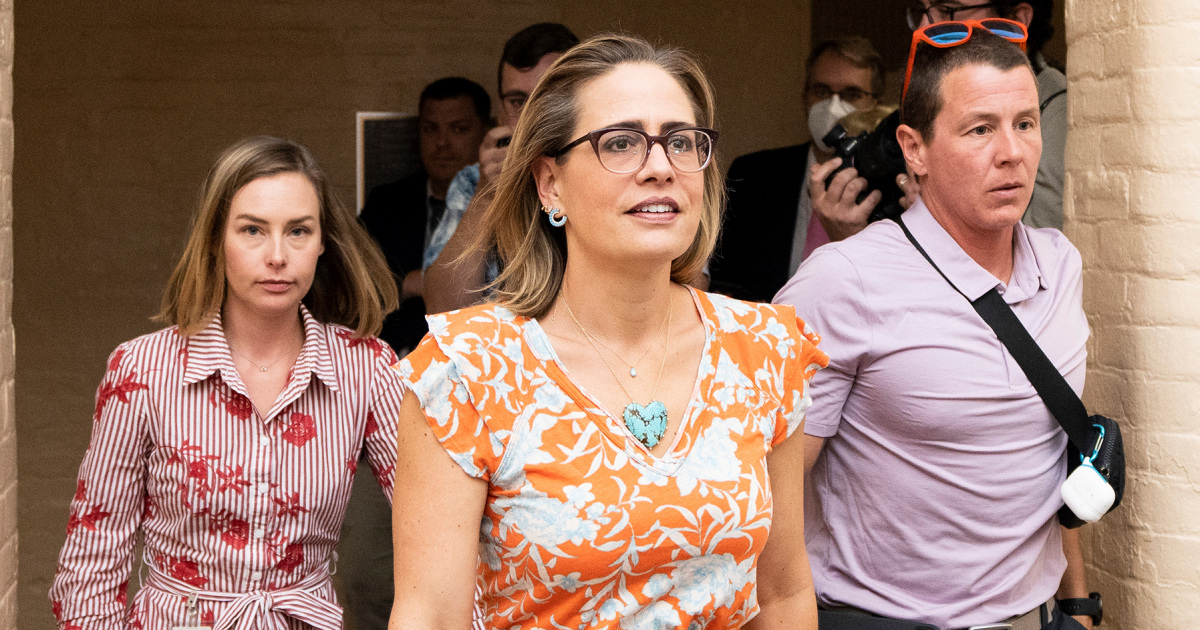 Sen. Kyrsten Sinema signed off on sweeping Democratic legislation Thursday that would provide new spending to mitigate climate change and extend health care access while taxing corporations.The Arizona Democrat's announcement likely unlocks the votes needed to pass the bill in the Senate.Sinema said her support came after Democratic leaders agreed to remove a provision on…

The Arizona Democrat’s announcement likely unlocks the votes needed to pass the bill in the Senate.

“We have agreed to remove the carried interest tax provision, protect advanced manufacturing, and boost our clean energy economy in the Senate’s budget reconciliation legislation,” Sinema said in a statement Thursday. “Subject to the Parliamentarian’s review, I’ll move forward.”

Her comments on the bill, known as the Inflation Reduction Act, came after a week-long silence that left many Democrats nervous that the enigmatic centrist may not sign off on it. Democrats have no hope of winning any Republican support, meaning all 50 senators in the caucus are needed to pass the measure.

“I am pleased to report that we have reached an agreement on the Inflation Reduction Act that I believe will receive the support of the entire Senate Democratic conference,” Schumer said in a statement Thursday. “The final version of the Reconciliation bill, to be introduced on Saturday, will reflect this work and put us one step closer to enacting this historic legislation into law.”

“Tonight, we’ve taken another critical step toward reducing inflation and the cost of living for America’s families,” Biden said in a statement. “I look forward to the Senate taking up this legislation and passing it as soon as possible.”

It was not immediately clear what other changes Sinema secured to support the legislation. Schumer said Thursday that it keeps “the major components” of the original bill, “including reducing prescription drug costs, fighting climate change, closing tax loopholes exploited by big corporations and the wealthy, and reducing the deficit by $300 billion.”

Sinema had long been opposed to a provision in the deal Manchin cut with Schumer that sought to close the carried interest tax break. A person close to Sinema said Thursday that her needs on the bill “have been met.”

In her statement, Sinema said she’d work separately “to enact carried interest tax reforms, protecting investments in America’s economy and encouraging continued growth while closing the most egregious loopholes that some abuse to avoid paying taxes.”

But that vow probably won’t to amount to much unless Democrats keep their congressional majorities in November or pass another party-line bill this year. Republicans are unlikely to agree to such a tax change under the regular 60-vote process for most Senate legislation, meaning the carried interest tax break is poised to be protected as a result of Sinema’s demands.

Democrats are aiming to pass the broad legislation ahead of the August recess in an effort to revive elements of Biden’s agenda before the midterm elections.

Zoë Richards is the evening politics reporter for NBC News.

Frank Thorp V is a producer and off-air reporter covering Congress for NBC News, managing coverage of the Senate.