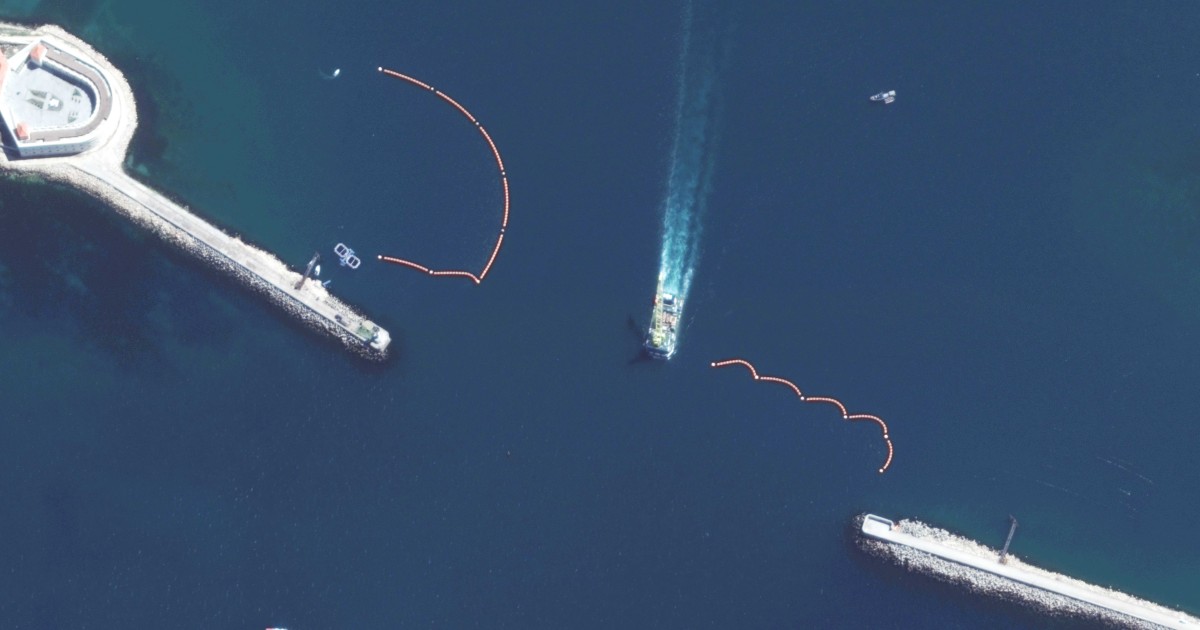 With its military manpower strained by the fighting in Ukraine, Russia appears to have devolved sea defense to a different mammal: dolphins. Moscow has deployed trained dolphins at the entrance to a key port in the Black Sea, apparently to protect a naval base from potential Ukrainian attacks, according to a review of satellite images by…

With its military manpower strained by the fighting in Ukraine, Russia appears to have devolved sea defense to a different mammal: dolphins.

Moscow has deployed trained dolphins at the entrance to a key port in the Black Sea, apparently to protect a naval base from potential Ukrainian attacks, according to a review of satellite images by the commercial firm Maxar and the U.S. Naval Institute (USNI).

Two transportable dolphin pens were moved to the Sevastopol harbor in February, around the time Russia launched its invasion of Ukraine, according to analysis of the satellite images by H I Sutton, a submarine analyst who specializes in the use of marine mammal pens and wrote for the naval institute.

The dolphins may be tasked with preventing Ukrainian divers from infiltrating the harbor underwater and sabotaging warships there, which sit just out of reach of Ukrainian missiles, he said.

In an email to NBC News, Sutton said that dolphins were “the most obvious type of mammal” being used to protect the naval base in the Black Sea. He added that these were most likely the same pens that Russia deployed to Tartus in Syria in 2018, where they used dolphins to counter enemy divers, retrieve objects from the sea floor, and perform intelligence operations.

A spokesperson for Maxar Technologies, who provided NBC with the satellite imagery, said that he “agreed with the analytic assessments made by our partners at the USNI.”

Although the Sevastopol naval base is not Russia’s largest in the Black Sea, it is crucial for the military given its proximity to the southern tip of the Crimean Peninsula, which Moscow annexed in 2014.

A senior Russian military commander said last week that the country’s goal in the conflict is now to seize full control of southern Ukraine as well as the east, forming a land bridge to Crimea. This “Battle for the Donbas” in eastern Ukraine is the second phase of Russia’s war after its failures around Kyiv and the north.

The sinking of the flagship of Russia’s Black Sea fleet, the Moskva, this month was a strategic and symbolic blow to the Kremlin’s war effort. Protecting remaining ships in the area may thus be a priority for the Russian military.

During the Soviet era, Russia used the Sevastopol base to train dolphins to search for mines and plant explosives on ships, according to the Moscow Times. After the breakup of the Soviet Union in 1991, Ukraine inherited the dolphins and retrained them as therapy animals for special needs children.

When Russia repossessed the area after annexation, it resumed the dolphins’ military training. In April 2019, the sighting of a beluga whale in a harness in Norway, with a camera and a clip reading “Equipment St. Petersburg,” pointed to the expansion of the program.

“It’s not surprising that Putin of all people would think that dolphins are a weapon of war,” Andrew Lambert, a professor of naval history at King’s College, London, said Thursday.

“Like so much of what we’re seeing in Ukraine, it’s the Soviet Union’s work being re-enacted by the current Russian government.” But he added that dolphins do have the potential to be efficient spies: “This is their world, and they’re going to find you underwater very, very quickly.”

Dolphins’ deep-diving abilities, as well as their sonar communication system, makes them more effective at underwater detection than any major technological advancement so far.

Animal rights activists frequently protest the use of sea mammals in war, pointing out that they do not have the ability to volunteer.

But since the Cold War, both Russia and the U.S> have deployed marine mammals to carry out searches underwater.

During the Vietnam War, the U.S. used bottlenose dolphins and sea lions to search for objects and patrol restricted waters. And in 2003, NBC News reported that the U.S. military had flown trained dolphins into a key Iraqi port to sweep for mines.