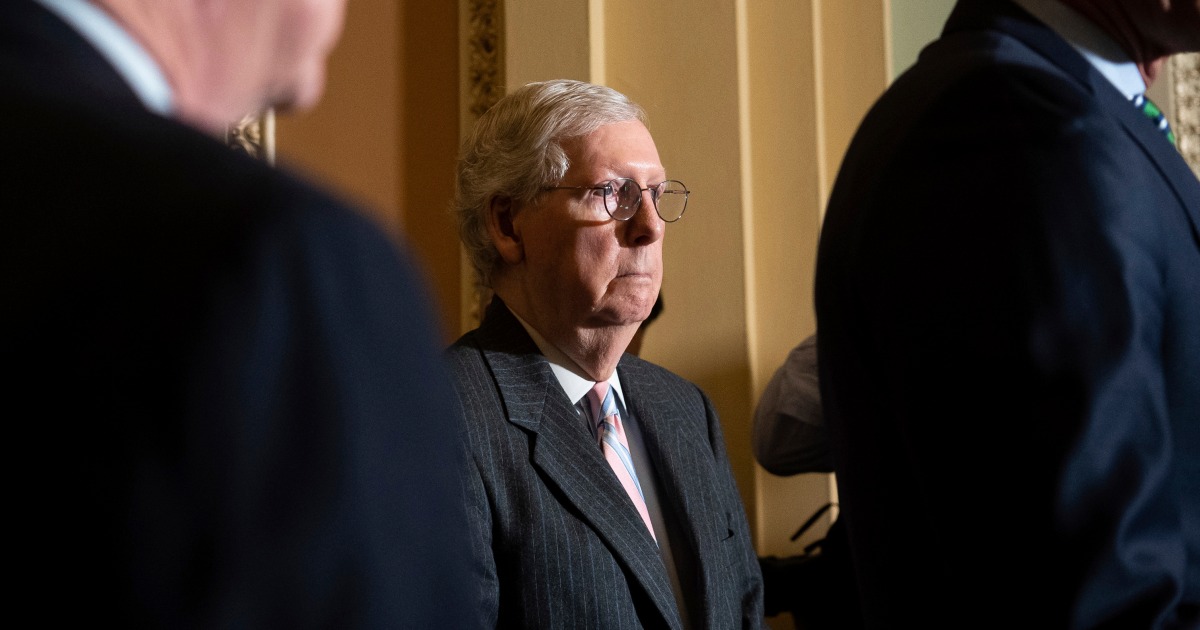 WASHINGTON — Senate Minority Leader Mitch McConnell has opened up a new line of fire against liberal "dark money" groups that collect large sums of cash from undisclosed donors and use it to promote Supreme Court nominee Ketanji Brown Jackson.“Before the 2020 election, one far-left dark money group put Judge Jackson on their Supreme Court…

WASHINGTON — Senate Minority Leader Mitch McConnell has opened up a new line of fire against liberal “dark money” groups that collect large sums of cash from undisclosed donors and use it to promote Supreme Court nominee Ketanji Brown Jackson.

His office — and Republicans on the Senate Judiciary Committee — have unleashed a series of attacks on left-leaning “dark money,” in particular the organization Demand Justice, as Jackson sits in the hot seat this week at her confirmation hearings.

But on Tuesday, when asked by NBC News if he favors new laws requiring the disclosure of donors, McConnell said he does not.

“I’m in favor of the way campaigns and issues are currently funded,” McConnell said, referring to independent 501(c)(4) groups that can raise hefty sums of money and conceal donors. “There are rational reasons for not having disclosure for those entities. That’s been my position for a quarter of a century and remains my position.”

McConnell has long been a fierce opponent of campaign finance restrictions, fighting in Congress and the courts for years. His aides said he was simply charging Democrats with hypocrisy for utilizing dark money. His remarks come amid a shifting political landscape over anonymous money: Conservatives outpaced the left for years, but after President Donald Trump was elected, liberal dark money groups caught up and even overtook their counterparts.

“We’re getting our asses kicked” in the dark money race, a Republican operative lamented.

‘Get rid of it on both sides’

Democrats say dark money should be outlawed but that they won’t unilaterally disarm while it’s legal and Republicans are wielding it.

Sen. Sheldon Whitehouse, D-R.I., said Tuesday he’s “the first to concede that there is dark money on both sides — and I hope very much we can get rid of it on both sides, shortly, by legislation.”

Democrats support requiring disclosures of donors giving $10,000 or more to a super PAC or 501(c)(4) group in an election cycle. The DISCLOSE Act, a Whitehouse-sponsored bill that has been repeatedly introduced over the last decade, has cleared the House and enjoys overwhelming support among Democratic senators.

Yet the No. 2 Republican senator said there isn’t much of an appetite in the caucus for requiring donor disclosures, leaving the cause without much of a path to winning the necessary 60 votes.

“I’ve never been a big fan of this kind of unlimited, undisclosed campaign money. But I’m kind of an outlier in my conference,” Senate Minority Whip John Thune, R-S.D., told NBC News.

Thune said “there is an argument to be made on” requiring disclosures, noting that campaigns are limited in their ability to raise money and “at such a disadvantage relative to outside groups, because they can raise money in unlimited amounts.”

Robert Maguire, the research director for the left-leaning Citizens for Responsibility and Ethics in Washington, had a pithy retort to the GOP criticisms: “Mitch McConnell railing against dark money is like Putin complaining against territorial integrity.”

The Supreme Court’s Citizens United v. Federal Election Commission ruling in 2010 gave rise to corporations and unions spending unlimited sums of money to influence elections. But while the justices said that is protected speech under the First Amendment, they haven’t ruled out new laws that require donors to be disclosed.

Whitehouse mocked the right-wing Judicial Crisis Network, which has spent millions of dollars promoting conservative judicial nominees, as “a dark money group using dark money to accuse Biden’s Supreme Court nominee — at that point a player to be named later, Judge Jackson had not been — of being a tool or a stooge of liberal activist dark money.”

Senate Majority Leader Chuck Schumer, D-N.Y., a co-sponsor of the legislation, said it will receive a vote in the full chamber.