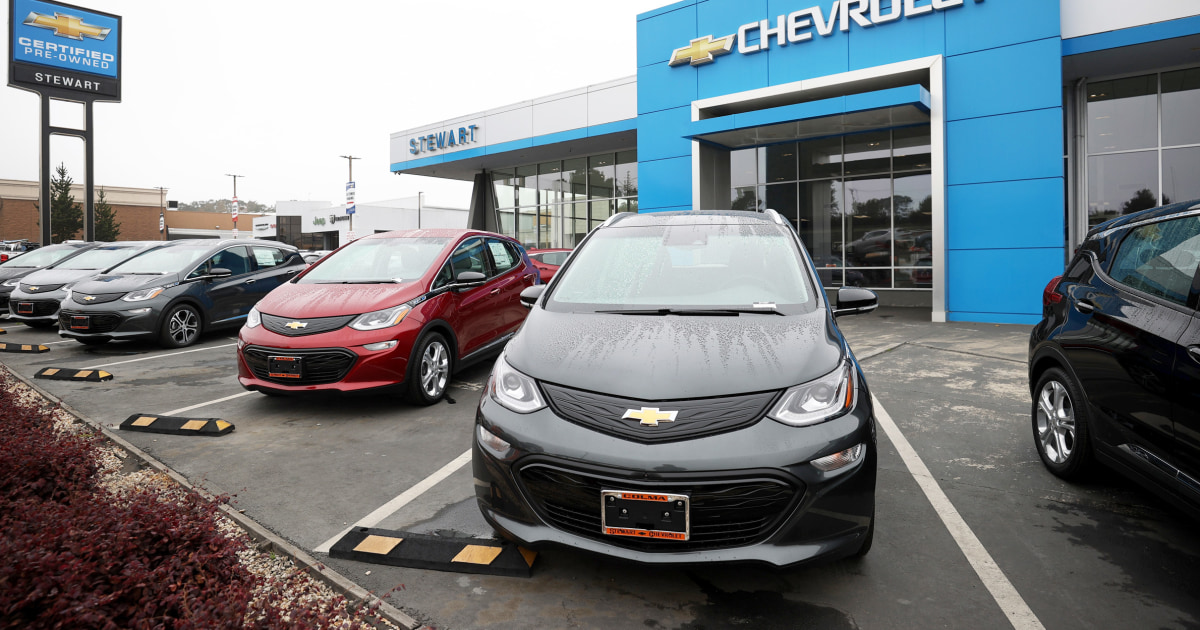 If you're shopping for a new vehicle right now, good luck finding what you want — especially at a reasonable price.The personal consumption expenditure index, the Federal Reserve's preferred monthly measure of inflation, hit 6.4 percent in February — the fastest rate of growth for that measure since 1982. While spending on automobiles overall, including used…

If you’re shopping for a new vehicle right now, good luck finding what you want — especially at a reasonable price.

The personal consumption expenditure index, the Federal Reserve’s preferred monthly measure of inflation, hit 6.4 percent in February — the fastest rate of growth for that measure since 1982.

It’s the result of ongoing supply chain bottlenecks caused by the global Covid-19 pandemic, as well as the surging demand for vehicles.

“If you want to buy a new car, you’re basically out of luck,” said Ed Yardeni, president of Yardeni Research Inc., a global investment strategy group. “They’ll take your order and it could take a few months … if you need a car now, they’re probably going to force you to get a used car.”

According to the most recent data from Kelley Blue Book, the average transaction price for a new vehicle hit $46,085 in February. That is down slightly from the previous month but still near the record-high prices measured in December 2021 — and up 11.4 percent, or more than $4,700, from February last year.

Meanwhile, more people are hitting the road again as the pandemic abates. Although the traffic levels in most cities remains below prepandemic levels, they are up substantially from 2020, according to data from TomTom, a traffic indexing group.

The confluence of forces have resulted in constrained inventories at dealerships. Jonathan Chariff, CEO of the South Motors Auto Group dealership in Miami, said there is typically as much as 70 days’ worth of cars on the ground, depending on the manufacturer.

These days, there can be as little as three weeks of inventory.

“It’s not where it needs to be,” Chariff said of the inventory levels. He said some buyers willing to wait are using the limited supplies as an opportunity to order cars to their taste, instead of merely choosing what’s on the lot.

“So there’s a higher propensity of people building out their own cars — although we still do see and sell the cars we have available,” he said. “But our day’s supply has come down from where it once was.”

But companies, including auto manufacturers, have been able to maintain pricing power because consumers still appear willing to spend. That’s despite incomes falling in real-dollar terms amid soaring inflation.

“The biggest story is that the omicron wave had little impact on the economy and consumption growth,” said Michael Pearce, senior U.S. economist at Capital Economics research group. “Incomes have actually been falling for the last seven months. So the big story is the resiliency of consumption growth in the face of falling real incomes.”

He said the savings rate has now declined to below prepandemic levels. After surging to all-time highs in the past 18 months, it has now fallen to below 7 percent of disposable incomes. Prior to the pandemic, the savings rate averaged at about 7.5 percent.

“People have continued spending because they’ve been able and willing to reduce saving,” Pearce said.

It’s an arrangement that likely won’t last much longer — meaning prices are likely to begin falling.

“That isn’t going to be sustainable,” he said. “You can’t keep raising spending by reducing savings.”

Pearce sees signs in Thursday’s expenditures report that, beyond near-term cost pressures, inflation is likely to begin cooling off in the months to come. In particular, the “core” measure of personal consumption spending that excludes food and gas ticked down last month.

“If those moderate, we’re going to see incomes rise again in real terms,” he said. “So that’s going to cushion the blow for households.”

The average household’s finances have held up well amid the pandemic — and will likely be able to withstand higher interest rates.

“Debt is relatively low, and interest rate payments are low as a share of incomes,” Pearce said, adding that even though vehicle and mortgage payments are going up because the cost of borrowing money is also rising, consumers are well-positioned to handle it.

Rob Wile is a breaking business news reporter for NBC News Digital. He holds a bachelor’s degree from Columbia University and a master’s degree in journalism from Northwestern University’s Medill School.