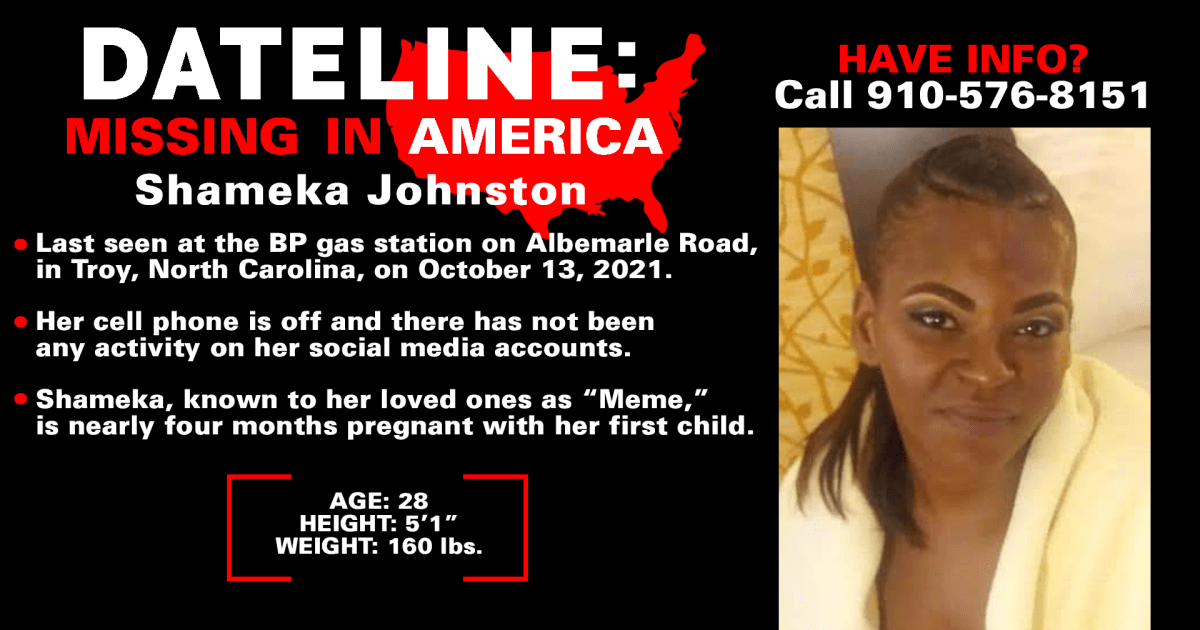 There’s not a day that goes by that Shameka Johnston doesn’t call one of her sisters to talk, or drop by her mom’s place of work just to say hello.But the 28-year-old resident of Troy, North Carolina, who is nearly four months pregnant with her first child, hasn’t been seen or heard from since October…

Shameka Johnston calls every day to speak with her sister or drops by her mom’s office to say hello.

But the 28-year-old resident of Troy, North Carolina, who is nearly four months pregnant with her first child, hasn’t been seen or heard from since October 13, and her family is extremely worried and concerned for her well-being.

“We talked at least three times that day,” her mother Sandra Ray told Dateline, referring to the day Shameka went missing. “It’s unusual for her to not call me the next day. It’s been almost two weeks. No phone call. No text. Nothing. All I know is something is wrong.”

Shameka’s family is worried not only because they are used to talking or seeing her every day, but also because she is nearly four months pregnant with her first child.

“She wasn’t sure what she was having but kept calling the baby Junior,” Sondra Johnston, her sister, told Dateline. She said that her sister had been trying to become pregnant for many years and was excited to be a mother.

The sisters’ mother told Dateline she remembers October 13 — the day Shameka went missing — as a normal day and that her daughter appeared to be happy.

Later in the evening Shameka was at Dollar General with her sister, and then at the BP station on Albemarle Road. Her sister told her family and police that Shameka was talking to two men at the gas station. They then offered her a ride and then she got in their truck.

Troy Police confirmed to Dateline that they are concerned about Shameka’s safety and say they are continuing to investigate her disappearance, but would not release details about the men in the truck. They need the public’s assistance in finding Shameka. Anyone with any information is asked to contact the police station.

Shameka’s family have been searching the Montgomery County woods, handing out flyers in nearby towns, and sharing the information on social media.

Shameka, who is nearly four months pregnant, is 5’1″ tall and weighs about 160 pounds. She has brown eyes and black hair. She has a scar across her forehead and on her left cheek.

Anyone with information on Shameka’s whereabouts is asked to call the Troy Police Department at 910-576-8151.

Andrea Cavallier is a Digital Producer for Dateline NBC.