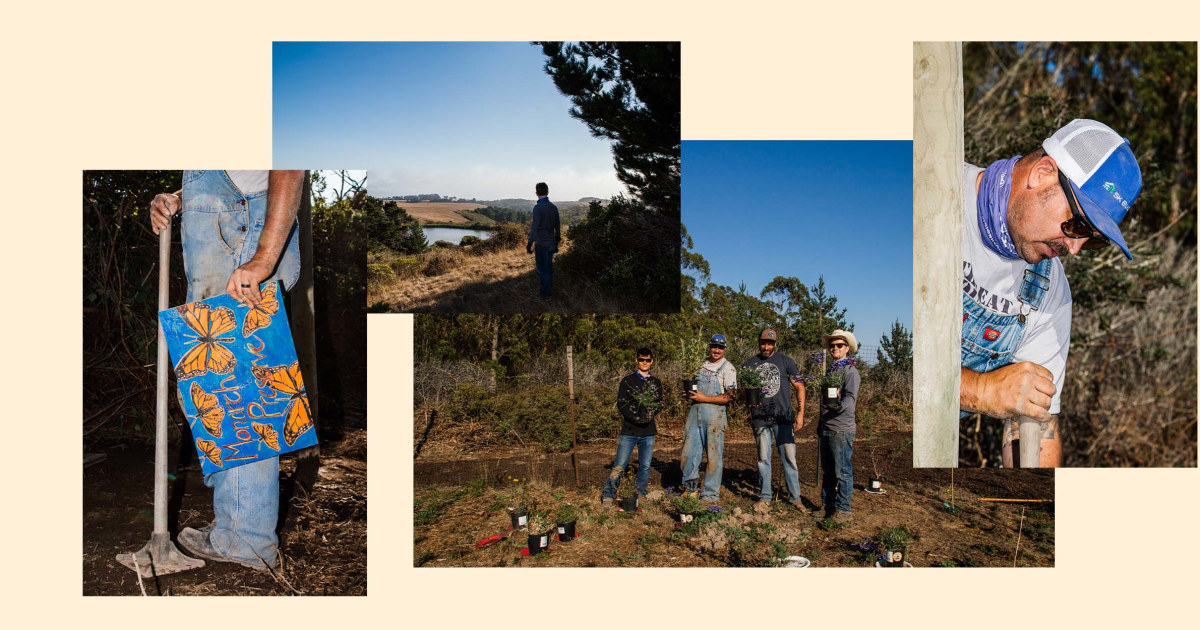 Sept. 25, 2021, 10:00 AM UTC / Updated Sept. 25, 2021, 1:08 PM UTCWhen Mark Matzeldelaflor left the military more than a decade ago, he spent years searching for something that filled him with the same sense of purpose as being a Navy SEAL.After serving a couple tours in Iraq, including as an elite sniper, he returned home…

When Mark Matzeldelaflor left the military more than a decade ago, he spent years searching for something that filled him with the same sense of purpose as being a Navy SEAL.

After serving a couple tours in Iraq, including as an elite sniper, he returned home and took up odd jobs — “just wandering and doing random stuff to make some money to pay the rent,” he said. On a whim, Matzeldelaflor said that he had tried magic mushrooms for the first-time with a friend. He felt a renewed sense of purpose.

“I just reconnected to nature and my past, where I was like a kid in the woods,” Matzeldelaflor said. Matzeldelaflor said, “And I realized that there is so much healing in being outdoors in nature, getting your hands dirty and doing good deeds. “

Last year, the 37-year-old turned that realization into a nonprofit organization called Guardian Grange, which aims to use nature to help veterans cope with trauma, post-traumatic stress disorder and other issues that come with transitioning back to civilian life.

“When you’ve been in a combat role, like myself, you get out and there’s nothing that correlates,” he said. These abilities are not a stepping stone to other things. And that can lead to all kinds of issues with drinking, self-medicating, suicides and all that stuff.”

The idea behind Guardian Grange is to not only provide a safety net for veterans, but to also teach them about conservation, sustainability and regenerative agriculture while leveraging skills honed over years in the military.

The organization currently has five core members and around 10 others who, Matzeldelaflor said, are ready to rotate among California-area projects as they come available.

One of the organization’s first major initiatives is to help construct a preserve for Western monarch butterflies, a pollinator species that has been pushed to the brink of extinction in recent years due to habitat loss, pesticide use and climate change.

Matzeldelaflor’s demeanor is calm and unhurried, but he’s clear-eyed in his mission to use nature and environmental projects to help people. He said he found that similar energy in Ole Schell, a 47-year-old filmmaker based in Bolinas, California, who came up with the idea to convert part of his 206-acre ranch into the so-called West Marin Monarch Sanctuary.

Schell said his drive to help resuscitate the dwindling population of Western monarchs came from memories of growing up on the ranch and encountering hordes of the charismatic orange-and-black winged insects.

Schell teamed up with the Xerces Society, a nonprofit organization that focuses on invertebrate conservation, to craft a plan for the property, known as Orville Schell Farms. The Xerces Society annually surveys the number and distribution of Western monarch butterflies along the California coast. This year’s count recorded fewer than 2,000 butterflies, a precipitous drop from the 1980s, when millions of monarchs would be tallied in California as the insects migrated south each winter.

“For an insect population to fall below 2,000 is pretty dire,” said Jessa Kay Cruz, a conservation specialist at the Xerces Society in Sacramento. “They’ve undergone about a 99.9 percent population decline in the past couple of decades. “

In the West, warmer temperatures together with years of intense drought and severe wildfires — all things that are exacerbated by climate change — are transforming the land and reducing the availability of plants that Western monarchs need to breed and fuel their long migratory journeys. Pesticides are also a problem for insects, as is habitat loss due to agriculture and urbanization.

Cruz and her colleague Madeline Kangas conducted a site visit to Schell’s ranch earlier this year and recommended more than a dozen types of native plants to fill the preserve. This included California aster, western azalea, and lilac verena. These are all nectar plants that are good for butterflies. These pollinating plants will hopefully attract monarchs to Orville Schell Farms along with blueberries, passion fruit and pomegranates.

While habitat degradation and climate change are wiping out some insect species, scientists have seen populations rebound when conditions stabilize, said Matt Forister, a professor of biology at the University of Nevada, Reno, who is not involved with the preserve in Bolinas.

“Insects are pretty good at taking advantage of any bit of land that isn’t polluted or destroyed,” he said. “If we give them an inch they’ll take it. “

As such, projects like Schell’s monarch butterfly preserve can be enormously helpful for broader conservation efforts, he added.

“It should give the general public hope,” Forister said. It is important that people take action in their own backyards, as well as municipal parks and greenways. These can be extremely resilient areas for insects. “

He added that he intends to eventually expand the butterfly preserve, based on how the monarchs respond this winter and whether he can secure funding to keep up with the project. Schell stated that he plans to continue his work with Guardian Grange, hosting nature walks on the property and educational sessions about native herbs and plants.

“I wanted to use the land to do something good,” Schell said. Schell stated that this was an opportunity to do good for the environment, help butterflies and improve people’s lives. “

That undercurrent of environmentalism and social good runs in the family. Schell’s father, Orville, acquired the land in Bolinas in the 1970s to run a free-range cattle ranch before the health benefits of free-range farming were widely known. Orville, a former journalist and expert on China is now the director of the Center for U.S.-China Relations at The Asia Society. He focuses much his work on climate change.

And it was Schell’s brother, Sebastian, who introduced him to Matzeldelaflor and Guardian Grange.

Matzeldelaflor said he’s eager to see how Schell’s monarch butterfly preserve evolves, adding that it’s the kind of project that he hopes his organization can take part in all across the country. Matzeldelaflor stated that he hopes to create connections and encourage a greater appreciation of the natural world through this work.

“The biggest thing I’ve noticed about trauma and people going through the process of healing is that the strongest medicine is just being around other people,” he said. I want to create space for healing and, even more importantly, better ways of living. “

Denise Chow is a reporter for NBC News Science focused on general science and climate change.