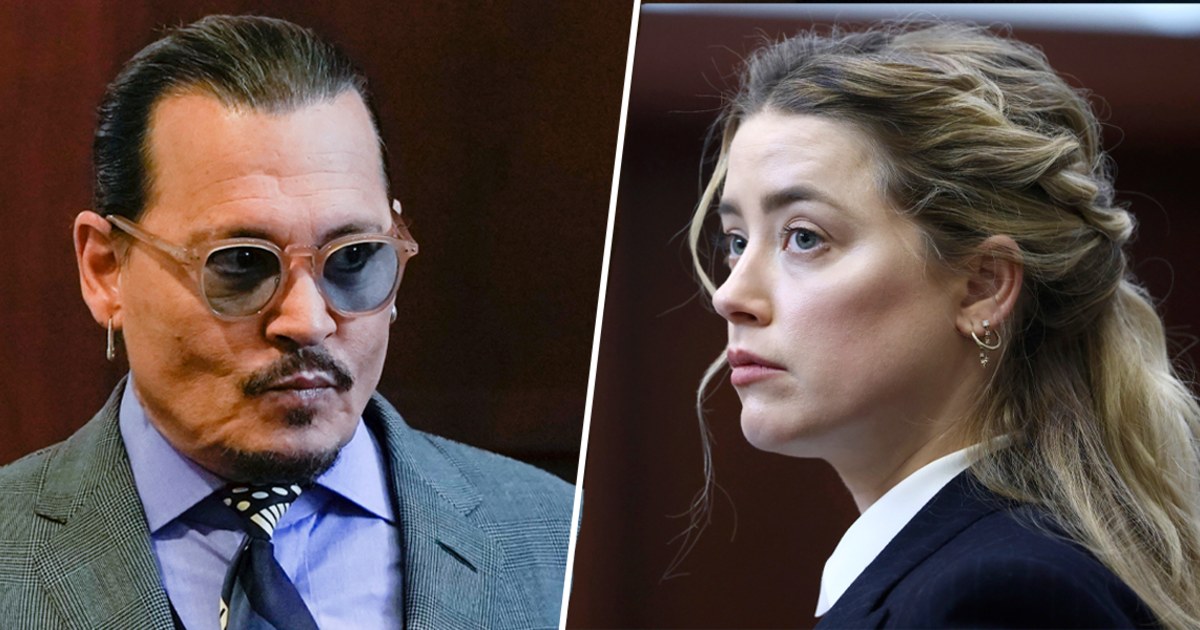 As the Johnny Depp-Amber Heard defamation case nears its conclusion, some men who say they have experienced domestic violence pinpointed a defining moment in the trial that, for them, felt pivotal in changing what it means to be a male survivor. Earlier this month, a recording played in the courtroom. In it, Heard says, “Tell people…

As the Johnny Depp-Amber Heard defamation case nears its conclusion, some men who say they have experienced domestic violence pinpointed a defining moment in the trial that, for them, felt pivotal in changing what it means to be a male survivor.

While on the stand, Depp was asked how he responded when Heard told him to “tell the world” that he was a domestic violence survivor. He told the courtroom, “Yes. I am.”

For some of the men watching, who had endured violence from a partner, the frenzied response to the trial has felt personal.

“When I initially heard [about the case], I was a little shocked. I was like, ‘Wow. Who would’ve thought this could happen to Johnny Depp?’” recalled Tony Enos, a Philadelphia pop singer who said he survived domestic violence.

Enos, who also works as a counselor to other men who have survived domestic violence, said that seeing a man, who is perceived to be as powerful, wealthy and famous as Depp, claim that he endured domestic violence has made him feel less alone.

“The awareness is everything,” Enos said. “Men can be survivors of [domestic violence] and interpersonal violence, too.” NBC News does not normally identify victims of domestic violence but was given permission by Enos to use his full name.

Male victims are still ‘not an accepted thing’

One in 3 women has experienced some form of violence from a partner compared to one in four men, according to the National Coalition Against Domestic Violence. The breadth between those numbers grows to 1 in 4 women and 1 in 7 men when it comes to severe violence, such as burning, beating or strangulation by an intimate partner, according to the NCADV.

Additionally, an information sheet from the NCADV acknowledged that, anecdotally, the organization knew of women being the primary aggressor toward men but did not possess data “that quantified how often women were identified as the primary abuser in the relationship.”

The facts of Depp’s case must still be debated by a jury — while some on social media have devoured the evidence and have tried to deduce who was the aggressor and who was the victim in the relationship, the trial is not in criminal court. Rather, the case, in civil court, will determine if Heard defamed Depp in a 2018 Washington Post essay, in which she described herself as a domestic violence survivor but never named Depp as the aggressor. Depp is suing for $50 million. Heard is countersuing for $100 million.

Heard said she only ever struck Depp in self-defense or in defense of her sister. She recalled a December 2015 incident, in which she said Depp held her head down into a pillow, which she said began to suffocate her.

Depp has denied ever physically abusing Heard or ever committing domestic abuse, including his denial in the defamation suit.

In 2020, Depp lost a libel case in the United Kingdom over allegations he hit Heard. Depp sued the parent company that owns The Sun and the newspaper’s executive editor in 2018 for calling Depp a “wife-beater.” Justice Andrew Nicol ruled against Depp in 2020, saying the British tabloid had presented substantial evidence to show that Depp was violent against Heard on at least 12 of 14 occasions.

In the case currently playing out in a court in Virginia, with each witness and new piece of evidence, the case becomes increasingly complex. And yet, in the eyes of public opinion, Depp’s popularity appears to be surging. From a “Saturday Night Live” parody of the case to a TikTok posted by former NSYNC member Lance Bass to the TikTok hashtag “#JusticeForJohnnyDepp” surging to more than 15 billion views, Depp appears to be the trial’s de facto victor.

In op-eds, like The New York Times’ “Amber Heard and the Death of #MeToo,’’ and The Guardian’s “#MeToo is over if we don’t listen to ‘imperfect victims’ like Amber Heard,” some question if the public’s treatment of Heard marks a turning point, or even the end, of the movement, warning that other powerful figures could attempt to emulate Depp’s comeback with litigation.

Experts have expressed concern that the level of vitriol directed at Heard, who has said throughout the trial that Depp abused her, could push some survivors deeper into hiding.

Despite the outdated stereotypes used online about what a “real victim” should look like, which some experts say could cause a “chilling effect” among survivors, some men and male-presenting people who have survived violent relationships and experts who work with survivors say the trial feels like a turning point in the stigma against male survivors.

Mimi Sterling, chief executive officer of The Family Place, a Dallas-based resource center and shelter for survivors of family violence, said some social work training outlines the belief that “men can’t experience domestic violence like women based on the power dynamic.”

“It’s just not an accepted thing in our society that men can be victimized in this way,” Sterling said.

For Jack, seeing a powerful man publicly state that he had endured domestic violence “lifted a weight off” his shoulders.

Jack, a survivor of domestic abuse who asked that NBC News refer to him by his middle name to protect his privacy, said he endured domestic violence and sexual abuse in addition to childhood abuse. He said for many years he kept quiet because he was embarrassed.

“Mr. Depp is actually brave enough to come forward. I would’ve felt humiliated having to tell the public my five-foot-two ex used to beat the crap out of me,” Jack said, adding that after watching Depp’s testimony, he was finally able to open up to friends about what he had endured.

Feelings of humiliation are just a part of the stigma that has prevented so many men from coming forward to share their story, Sterling said.

Raven Jenerson, interim clinical director for the Rape, Abuse & Incest National Network (RAINN) and a licensed independent clinical social worker, said that all people, including victims, must work to re-learn what it means to be masculine and how a masculine person should behave when confronted with a domestic violence situation. Stereotypes about how men should act and how they should cope with a violent partner, especially in heterosexual relationships, are inaccurate and lead to more victims staying silent, experts said.

“We want folks to know that there’s no such thing as a perfect survivor … perfection is relative,” Jenerson said.

Sterling echoed Jenerson, adding that the stigmas have led to less research around male survivors and fewer resources for them. Jenerson also mentioned that while RAINN has seen a rise in the reporting rates from other gender identities, men still lagged behind.

The social media slant and justice-by-proxy

On social media, men who say they have experienced domestic violence say that Depp has opened the door for men and male-presenting survivors to share their stories.

For some survivors, the seemingly relentless online support for Depp and the litany of disdain for Heard has felt like vindication and justice from afar — a proxy victory over their own abusers.

Searching the terms “I’m a survivor” and “Johnny Depp” on Twitter displays what appears to be thousands of tweets of victims describing how empowered they’ve felt by Depp’s case.

“There are a lot of male survivors of abuse out there that are talking about their experiences because of Johnny Depp,” Canadian writer, producer and YouTuber Liana Kerzner tweeted, adding in a subsequent tweet that “women are not default victims — men are also abused.”

Another person wrote, “I’m a survivor and I side with Johnny Depp because what happened to him also happened to me. The same level of depravity and intentional malice.”

Someone else tweeted that Depp had given them strength: “As a DV survivor, a male victim, I’m disgusted that media is catering to #Amber. I lost years of my life, I still suffer from panic, nightmares and feelings that somehow I’m the one in the wrong.”

And while the case is a defamation case in a civil court and no one is facing a criminal conviction or jail time, the support is enough for some.

“I would never fight back because I would never want to be in Mr. Depp’s position,” Jack said, expressing fear that if he ever retaliated, his former partner could claim that Jack was the aggressor. “Now that he’s come forward, it has given me and others allowance to say, ‘I’ve been abused by a domestic partner, too.’”

‘Normalizing the conversation and raising awareness’

Some experts argue that seeing a man say — in a public venue during a high-profile trial — that he is a victim of domestic abuse could have long-lasting benefits.

The Family Place operates the only shelter in the state of Texas exclusively serving male and male-presenting survivors of domestic violence, according to Sterling. When residents of the shelter were asked about the Heard-Depp trial, they said they felt validated and heard, a team leader reported to Sterling.

“Having a landmark case like this serves a greater purpose in a way of normalizing the conversation and raising awareness around the fact that men absolutely can be victimized and awareness around what that victimization and that abuse look like,” Sterling said.

Sterling can’t say for certain if the Depp case will lead to an increase in the male reporting statistics, but she does believe that the more there is a national conversation around domestic abuse and how it affects men, more people will come forward.

“It’s horrible it’s playing out on an international stage,” she said, “I do hope that part of the benefits come from victims saying, ‘Yeah, this is a problem. I need to get out.’”