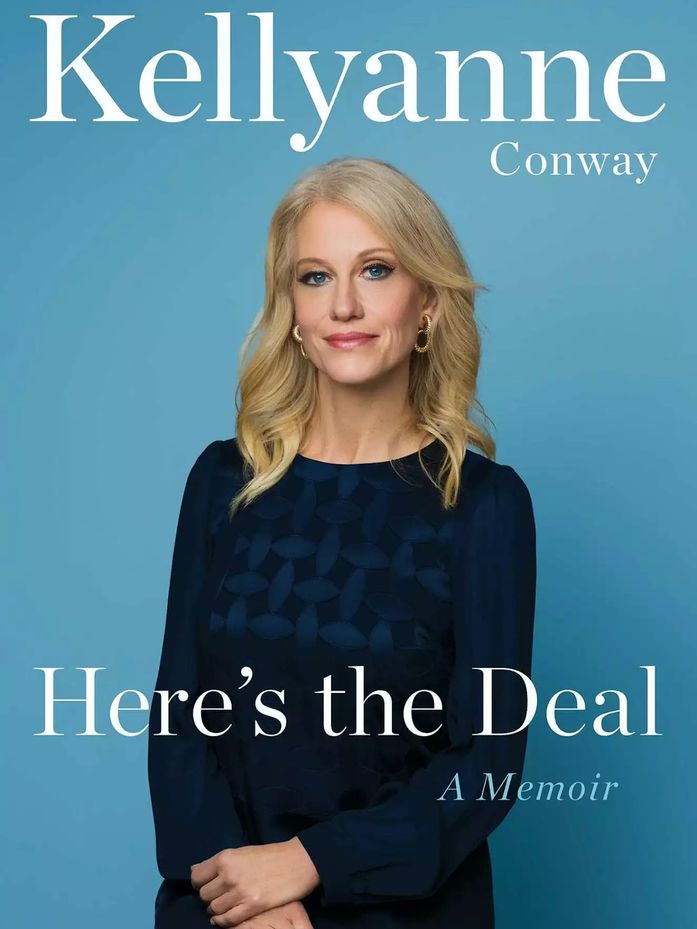 NEWS AND OPINION: She was there during a notable portion of former President Trump’s time in office. And Kellyanne Conway has a book titled “Here’s the Deal: A Memoir” arriving on Tuesday. “I like to talk. Then again, that’s not exactly breaking news,” she wrote in the introduction. “I’ve been a little quiet lately. Quieter…

She was there during a notable portion of former President Trump’s time in office. And Kellyanne Conway has a book titled “Here’s the Deal: A Memoir” arriving on Tuesday.

“I like to talk. Then again, that’s not exactly breaking news,” she wrote in the introduction.

“I’ve been a little quiet lately. Quieter than I usually am. But you know I couldn’t sit quietly forever. Lots of people already know who I am. But not from where I’ve come, and what makes me tick, and how I found myself in the middle of incredible opportunities and wild dramas,” Mrs. Conway noted.

Yes, there were certainly some wild dramas during the author’s time in the White House, where she served as senior counselor to Mr. Trump from 2017 to 2020. But those years were not without significance.

“You made history,” Mr. Trump once told the author.

In a statement about her book, Mrs. Conway said that “long before I joined the Trump campaign and White House, I’d made a career out of calling things as I saw them, with no notes in front of me and no net beneath me.

“I brought that same approach to this book, which should engage, engross and entertain plenty of people,” she said.

“It’s all here: what it’s like to be dissected on national television. How to outsmart the media mob. How to outclass the crazy critics. How to survive and succeed in male-dominated industries. What happens when the perils of social media really hit home. And what happens when the divisions across the country start playing out in one’s own family,” the publisher says in advance notes.

Much of the media has selectively parsed her work seeking anti-Trump tidbits, but that’s to be expected.

Mrs. Conway, incidentally, will appear on ABC’s “The View” on Tuesday, which should be, uh, interesting.

The book was published by Threshold Editions, the conservative imprint of Simon and Schuster — which also counts Fox News hosts Tucker Carlson, Sean Hannity and Mark Levin in their stable of authors.

So have you heard enough about monkeypox yet?

That aside, the news media is more than happy to report about monkeypox. Here’s a few headlines from the last 48 hours:

The economic news is grim. The stock market has faltered and consumers are more than worried about inflation and their retirement savings plans. Let’s recall that just a few months ago (Jan. 4) the S&P 500 stock-market index rose to 4,818.62, before starting a long slide the index to around 3,900 — essentially where it was the day President Biden took office.

“Falling stock prices in recent weeks have become as palpable as raging inflation over the past year. Much of this has origins in President Biden’s misguided policies. Trillions of dollars in spending have fueled runaway inflation, a rise in interest rates, and a bubble in asset values, which is bursting now,” said S.P. Kothari, former chief economist at U.S. Securities and Exchange Commission from 2019 to 2021.

“To make matters worse, the administration believes solutions lie in excessive regulation, choking off oil and gas exploration, raising taxes, unchecked immigration, deemphasizing meritocracy, and dancing with rogue regimes of Venezuela and Cuba. All these snake-oil remedies will further deteriorate the economy,” Mr. Kothari noted in a statement to Issues & Insights.

Issues & Insights said in an editorial statement that while one can “call us a bunch of curmudgeons. We don’t expect President Biden to change and are skeptical if the Fed can tame inflation.”

“President Biden is beholden to the far-left wing of his party. He will continue to blame everyone and everything, whether it’s inflation, immigration, gasoline prices, or baby food shortages. If history is any guide, the economy needs strong medicine to mend. The sugar coating that we can overcome inflation without a recession is all Pollyanna,” it said.

The national average gas price per gallon is $4.60 as of Monday, and has lurched over $6 per gallon in some states, according to both AAA and GasBuddy.com.

The GOP has a simple explanation for it all, at least for now.

“Joe Biden and Democrats in Congress launched a war on American energy because they think high gas prices will force people to transition away from gas powered cars. They are fully responsible for the high gas prices Americans are paying,” said Mike Berg, deputy communications director for the Republican National Congressional Committee, in a statement to Inside the Beltway.

• 55% of registered U.S. voters say large corporations should not actively engage with important political and cultural issues and focus instead on their business and issues that affect it.

• 27% say that if they comment on issues, corporations should represent the views of their customers.

• 18% say they should represent their employees, 18% say their shareholders.

• 19% are not sure whom the corporations should represent if they comment.