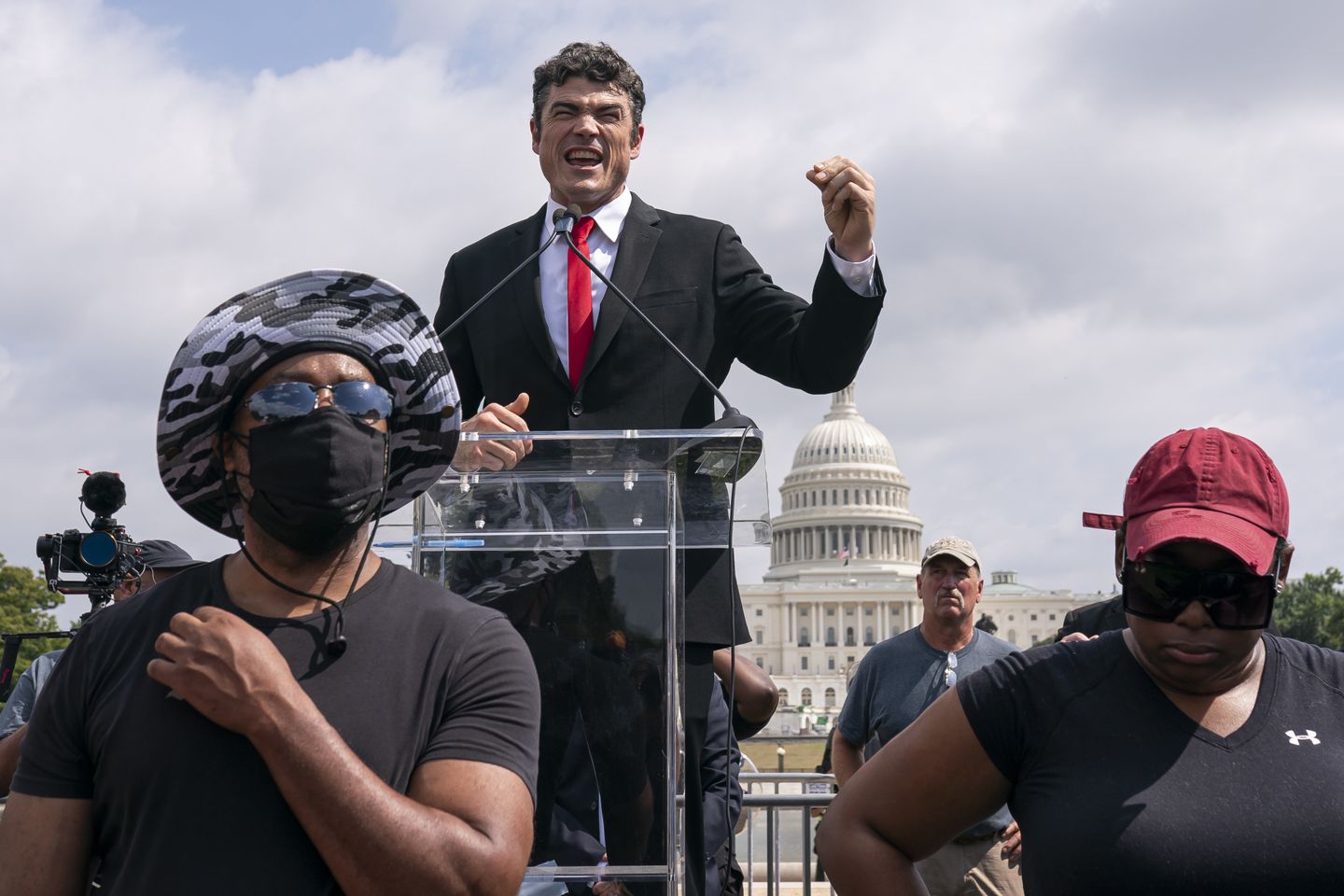 The highly anticipated “Justice for J6” rally on Saturday fell short of fears that the event could be a potential sequel to the violent Jan. 6 riot when hundreds of people stormed the Capitol in support of then-President Trump. The rally permit was for 700 expected attendees, but roughly 400-450 people showed up — including…

The highly anticipated “Justice for J6” rally on Saturday fell short of fears that the event could be a potential sequel to the violent Jan. 6 riot when hundreds of people stormed the Capitol in support of then-President Trump.

The rally permit was for 700 expected attendees, but roughly 400-450 people showed up — including members of the press — according to an estimate by the United States Capitol Police.

Cara Castronuova spoke at the rally, saying that it was peaceful, despite Washington’s fears.

Thank you to the mainstream media who stated that this was going to be a white-supremacist rally. “Do I look like a white extremist to you?” asked Ms. Castronuova. She is of Chinese and Italian heritage.

Event planner Matt Braynard was the data director for former President Trump’s 2016 campaign. He warned attendees for several weeks not to wear anything that supports a political party.

Mr. Braynard asked at one point in the rally two people who were carrying American flags with symbols from the far-right extremist group Three Percenters to either remove the flags or swap them for flags that do not have the symbol.

” This is about the many people there that day, who have not been charged or accused of violence.

Attendee Maria Delaura, 57, told The Washington Times that she traveled to the rally from New York on behalf of a man who she said is detained in the D.C. jail on charges linked to the Jan. 6 riot.

“I’m here today to support him because I believe that he has the right be heard,” Ms. Delaura stated. “He has the right for his case to be heard by the justice system. He should be treated properly in that prison

. The Metropolitan Police Department and USCP had coordinated for weeks ahead of the rally and prepared a large law-enforcement presence on Capitol Hill and in the surrounding areas.

During a press conference Friday, officials said both the Capitol Police and the Metropolitan Police Department would be fully activated for the rally, and 100 unarmed D.C. National Guard troops would be on standby.

In the days before the rally, police had erected a new fence around the Capitol Building and the U.S. Supreme Court. They set up signs stating “No Gun Zone” and installed surveillance cameras at the rally site.

Capitol Police Chief Tom Manger stated that the temporary security measure — first set up in response to the riot, and then taken down in July — was only there for temporary purposes.

Mr. Trump stated in an interview with The Federalist he believed that the Washington, D.C. rally, organized by his ex-staffer, was a “setup,” and added that his supporters would find themselves in a bad situation, regardless of whether they decide to show up or stay at home.

On Saturday, that’s an arrangement,” Mr. Trump stated. “If people don’t show up, they’ll say, ‘Oh, that’s a lack in spirit.’ And if they do show up, they’ll be harassed Mr. Braynard stated during the rally that it was a great honor to have them there.

Mr. Braynard stated that he did not comment on Mr. Trump’s input after the rally.

Mike Collins, a GOP candidate for Georgia’s 10th district, spoke during the rally and demanded that the “J6 political prisoners” get their day in court.

“The American people aren’t stupid,” Mr. Collins stated. “We can see the difference in federal government treatment because of someone’s partisan beliefs

Joe Kent, a Republican challenging Jaime Herrera Beutler in Washington’s 3rd Congressional District also spoke. He said he believed it was the duty of people to fight for freedoms and cited his own military experience.

“Make no mistake, the same governments that do it overseas will do it here, and they have already begun,” Mr. Kent stated. “It’s banana republic stuff when political prisoners are arrested and denied due process.”

Mr. Kent is a retired U.S. Army Special Forces who served for over 20 years, and completed more than 11 combat deployments.

The rally lasted less than an hour.

Counter protests were also held elsewhere in the city, but the clashes between rallygoers and counter-demonstrators — which were Chief Manger’s main concern for violence — did not happen.

Sarah Douglass, 60, of Fairfax, Virginia, stood at a counter protest at Freedom Plaza with a sign that read “J6 insurrectionists are criminals.” She told The Times that she disagreed with the rally in support of the jailed riot defendants.

I believe that the insurrectionists should be treated like domestic terrorists by the court system,” Mrs. Douglass stated. They are not tourists. They are not political prisoners. They are criminals .”

More than 600 persons have been charged in connection with the riot. Most of them have been released and are awaiting trial.