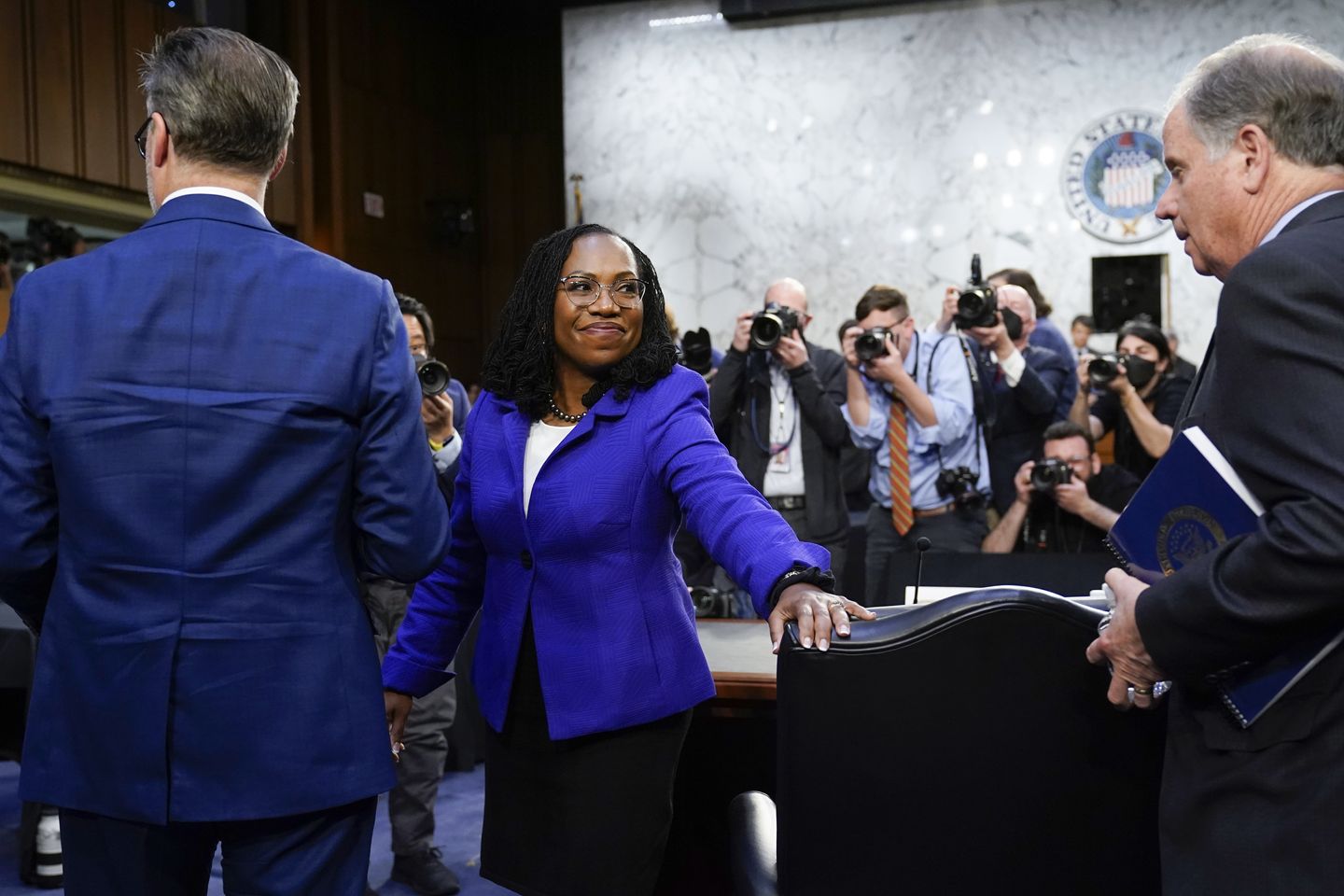 Judge Ketanji Brown Jackson told senators Monday that she believes the Constitution grants a “limited” role to judges, kicking off her Supreme Court confirmation hearing with an early overture to Republicans who will decide how difficult a path she has to the high court. Judge Jackson said she takes judicial independence “very seriously” and decides…

Judge Ketanji Brown Jackson told senators Monday that she believes the Constitution grants a “limited” role to judges, kicking off her Supreme Court confirmation hearing with an early overture to Republicans who will decide how difficult a path she has to the high court.

Judge Jackson said she takes judicial independence “very seriously” and decides cases from “a neutral posture,” as she tried to preempt arguments that she would be an activist liberal voice on the bench.

“I know that my role as a judge is a limited one, that the Constitution empowers me only to decide cases and controversies that are property presented, and I know my judicial role is further constrained by careful adherence to precedent,” the judge told the Senate Judiciary Committee.

She gave her brief opening statement after all 22 senators had their say, laying out what the next two days of questions would look like.

Democrats celebrated the historic nature of her nomination. If confirmed, the 51-year-old D.C. native and Harvard Law graduate would be the first Black woman, and only the third Black person, to hold a seat on the high court.

“Today for me is a day of joy,” said Sen. Cory A. Booker, New Jersey Democrat. “Judge Jackson’s nomination breaks an artificially confining mold of our past and opens up a more promising potential-filled future for us all as Americans. It signals that this nation will draw more deeply from all of our talent and genius that will benefit all Americans.”

He and fellow Democrats said Judge Jackson’s pioneering nomination goes beyond her racial identity and includes her time on the U.S. Sentencing Commission and her years as an assistant public defender — a first for a potential high court pick — to go along with eight years as a U.S. district judge and nine months as a federal appeals court judge.

Republicans acknowledged the historic moment but said Judge Jackson’s biography and resume are less important than her judicial philosophy.

“I think it is good for the court to look like America, so count me in on the idea of making the court more diverse,” said Sen. Lindsey Graham, South Carolina Republican. “I want the court to play a particular role in America. One is — make it look more like the country — but also make it operate in the confines of the Constitution.

“We are going to ask you what we think you need to be asked,” he told the judge.

Republicans have suggested in recent days that Judge Jackson’s record shows she is weak on crime.

Sen. Josh Hawley, Missouri Republican, accused Judge Jackson of going easy on defendants sentenced for child pornography crimes. As a district court judge, he said, she meted out sentences well below what federal sentencing guidelines recommended and often the bare minimum that the law allowed.

Republicans promised that the hearing would be different from the free-for-all brawl that sprung up during the confirmation of Justice Brett M. Kavanaugh in 2018 or the nasty questions about the process that dogged President Trump’s other nominees, Justices Neil M. Gorsuch and Amy Coney Barrett.

Underscoring the Republicans’ approach, Sen. Chuck Grassley of Iowa, the Senate’s senior Republican lawmaker, held the chair for Judge Jackson as she took her seat to start the proceedings.

“We won’t try to turn this into a spectacle based upon alleged process fouls,” Mr. Grassley said. “What we will do, however, is ask tough questions about Judge Jackson’s judicial philosophy.”

In a reference to Justice Kavanaugh’s bitter and at times deeply personal 2018 confirmation battle, Sen. Ted Cruz, Texas Republican, told the nominee, “No one is going to inquire into your teenage dating habits.”

Mr. Grassley did complain, though, that the confirmation hearings are going forward without documents from Judge Jackson’s four years on the Sentencing Commission, the independent agency that helps set sentencing guidelines for the federal court system. He said the Obama administration withheld 48,000 pages of requested information under the Presidential Records Act.

“That’s a lot of hiding,” he said. “The limited number of useful records we received from the Obama White House show exactly why Sentencing Commission documents would have been important. There are a number of dark money groups on the left that argue federal judges should make policy decisions based on the judges’ own values.”

A Senate Judiciary Committee Democratic aide said Republican and Democratic staff met with the commission officials and were told that nonpublic materials from Judge Jackson’s work on the commission “would add little value.”

The aide said Judge Jackson shared more than 12,000 documents from her time on the Sentencing Commission, “including commission reports and detailed meeting minutes – in addition to her nearly 600 written judicial opinions during her time on the bench.”

Judge Jackson was picked to be a district judge by President Obama and won confirmation by voice vote in 2013. President Biden nominated her last year to fill a seat on the U.S. Circuit Court of Appeals for the District of Columbia. She won confirmation on a 53-44 vote.

Last month, Mr. Biden named her to fill the seat of retiring Justice Stephen G. Breyer, a Clinton appointee to the high court.

Judge Jackson’s brief time on the appeals court has produced few clues about how she would approach the law as one of nine people able to rewrite understanding of the Constitution from the bench of the high court.

Senate Minority Leader Mitch McConnell, Kentucky Republican, noted in a speech from the chamber floor Monday that Judge Jackson authored just two opinions during her time on the appeals court.

“We know a lot about the time Judge Jackson spent applying precedent as a trial judge on the district court but very little about her independent views of larger constitutional and legal questions,” he said.

Mr. McConnell is one of the 44 Republicans who voted against Judge Jackson’s circuit court nomination last year, and he said his meeting with the judge this time was enjoyable — “she’s a likable person”— but it did not resolve his concerns about her as a judge.

“Judge Jackson suggested to me in our meeting that she does not really view herself as having any judicial philosophy at all. But meanwhile, in the press, boosters of her nomination say she does have a philosophy and assure us that it’s mainstream. So which is it?” Mr. McConnell said.

Judge Jackson gave away little on Monday other than to embrace the theory of a limited role for judges.

“During this hearing, I hope you will see how much I love this country and the Constitution and the rights that make us free,” she said during her opening statement. “I have dedicated my career to ensuring the words engraved on the front of the Supreme Court building — ‘Equal justice under law’ — are a reality and not just an ideal.”

She spent most of her opening statement thanking family and friends and revealing a deep faith in God.

“It is faith that sustains me at this moment. Even prior to today, I can honestly say that my life has been blessed beyond measure,” the judge said.

Judge Jackson noted that her parents moved from Miami to the District of Columbia after civil rights were enacted so she could have opportunities that were not afforded to them.

“My parents taught me that, unlike the many barriers they had to face growing up, my path was clearer, so if I worked hard and I believed in myself — in America — I could do anything or be anything I wanted to be,” she said.

As a working mother, Judge Jackson said, she struggled to find a balance.

“I hope that you have seen with hard work, determination and love, it can be done,” she said to her two daughters.