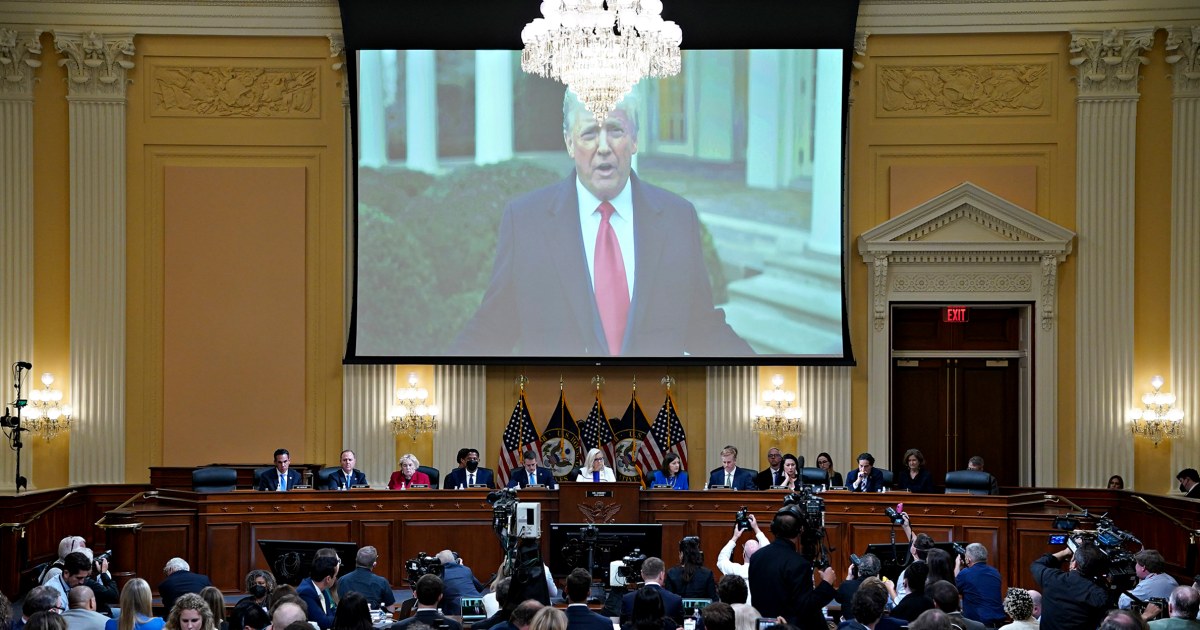 As a violent mob overran the Capitol after his rally on Jan. 6, Donald Trump wasn't sorry or alarmed, the House Jan. 6 committee showed in a public hearing Thursday night. The attack served as his last, slim hope of retaining power by delaying certification of Joe Biden’s victory, the committee argued. And Trump didn’t want…

As a violent mob overran the Capitol after his rally on Jan. 6, Donald Trump wasn’t sorry or alarmed, the House Jan. 6 committee showed in a public hearing Thursday night.

The attack served as his last, slim hope of retaining power by delaying certification of Joe Biden’s victory, the committee argued. And Trump didn’t want to see the riot quelled too quickly as Congress met to tally the electoral votes.

So, the 45th president watched the melee unfold on Fox News in his private dining room off the Oval Office. Aides came in and implored him to make a statement condemning the violence and calling on the rioters to go home. Instead, he watched more television. He called a senator about delaying the presidential vote count; he phoned his private attorney Rudy Giuliani. But he didn’t summon the Pentagon, or deploy the National Guard, or mobilize any of the law enforcement agencies needed to quash the riot and permit the transfer of power central to a functioning democracy.

That wasn’t an accident or a bout of indecision on Trump’s part, the committee members said. It was part of a deliberate plan.

“Rather than uphold his duty to the Constitution, President Trump allowed the mob to achieve the delay he hoped would keep him in power,” said Rep. Elaine Luria, D., Va., a committee member.

The committee’s primetime hearing focused on the 187 minutes between the end of Trump’s speech at the Ellipse at 1: 10 p.m. and the moment at 4: 17 p.m. when he sent out a video telling his supporters he loved them and urging them to go home. It was among the most revealing of the eight sessions held so far, with harrowing audio of Secret Service agents scrambling to lead then-Vice President Mike Pence to safety as the mob closed in.

Airing outtakes of a Trump address the following day, the committee showed him refusing to state plainly that the election was over. He insisted the line be removed from his remarks.

With more evidence coming in daily, the committee plans to hold additional hearings in September.

Here are some key takeaways from Thursday night:

Trump had opportunities to call off the attack, if that’s what he wanted.

A new witness who testified before the committee this week described a conversation between two White House lawyers, Pat Cipollone and Eric Herschmann, surrounding a call that had been arranged with the Pentagon about stopping the attack. Cipollone wound up taking the call because, as Herschmann described it, “the president doesn’t want anything done.”

Mark Milley, chairman of the Joint Chiefs of Staff, didn’t hear from Trump about the riot; he spoke instead to Pence.

The panel played audio from its interview with Milley, who said of Trump: “You know, you’re the commander in chief. You’ve got an assault going on in the Capitol of the United States of America. And there’s nothing? No call? Nothing? Zero?”

Trump learned the Capitol was under siege within minutes of finishing his speech that day and returning to the White House, according to witness testimony. At any point, he could have made the short walk from the dining room into the White House press briefing room and given a public statement telling his supporters to leave the building. He didn’t do it.

Trump’s supporters hung on his every word

Trump has an emotional hold over his base that is unique in presidential politics. When he speaks, his voters pay attention. That’s one reason why his aides wanted him to swiftly issue a statement denouncing the violence and urging the rioters to stand down.

“I worked on the campaign, I traveled around the country going to countless rallies with him,” said Sarah Matthews, a former Trump White House press aide and one of two witnesses appearing live Thursday. “I see the impact that his words have on his supporters. They latch onto every tweet and word that he says.”

Instead of using his considerable influence to end the riot at an earlier point, Trump inflamed matters by sending out a tweet at 2: 24 p.m. saying Pence lacked the “courage to do what should have been done,” witnesses told the committee.

At a time when Pence’s life was in danger, that tweet was “potentially giving the green light to these people,” Matthews added. “Telling them that what they were doing by entering the Capitol was OK and that they were justified in their anger. He shouldn’t have been doing that. He should have told people to go home and condemned the violence that we were seeing.”

To demonstrate how his supporters hung on every word, the panel played radio transmissions of Oath Keepers — some of whom were in the Capitol — discussing Trump’s 2: 38 p.m. tweet telling them not to attack the police.

“Trump just tweeted, ‘Please support our Capitol Police. They are on our side. Do not harm them,’” one Oath Keeper said to the group.

“That’s saying a lot by what he didn’t say: He didn’t say not to do anything to the congressmen,” another Oath Keeper replied.

Committee singles out Hawley and McCarthy, shows they feared the rioters

One of the most iconic images of Jan. 6 is of Sen. Josh Hawley, R-Mo., pumping his fist in the air in solidarity with Trump supporters who were gathering outside the Capitol before the riot began.

A Capitol Police officer, who witnessed Hawley, told the committee that the senator’s gesture “riled up the crowd,” Luria said.

“And it bothered her greatly because he was doing it in a safe space, protected by the officers and the barriers.”

Later that afternoon, Luria said, Hawley was one of the senators who ran from those same rioters as they breached the Capitol building and then the Senate chamber itself.

“Senator Hawley fled after those protesters he helped to rile up stormed the Capitol,” the congresswoman said.

When the committee played a surveillance video of Hawley running through the Senate halls to safety, the hearing room erupted in laughter. Hawley, a Trump ally, is often mentioned as a possible presidential candidate in 2024.

“Think about what we’ve seen,” Luria said. “Undeniable violence at the Capitol. The vice president being evacuated to safety by the Secret Service. Senators running through the hallways of the Senate to get away from the mob.”

Later in the hearing, the committee played a video montage of witnesses testifying that McCarthy, one of Trump’s most loyal allies on the Hill, also was fearful of the violent rioters who had smashed windows in his office and sent his staffers fleeing. He phoned Trump, first lady Melania Trump, Pence and his top aide, and others, trying to get the president to call off the mob.

Ivanka Trump and Jared Kushner, Trump’s daughter and son-in-law, got calls from McCarthy too. Kushner was in the shower, he said in recorded testimony played Thursday, but had grown close to McCarthy, so he answered it.

“He told me it was getting really ugly over at the Capitol and said, ‘Please, you know, anything you could do to help I would appreciate it,’” Kushner recalled to the committee. “I got the sense that … they were scared.”

“‘They’ meaning Leader McCarthy and people on the Hill because of the violence?” someone from the committee asked.

“That he was scared, yes,” Kushner said of McCarthy.

Capitol and D.C. Metro police officers who battled rioters that day have attended every single Jan. 6 hearing. They’re still waiting for Trump to pay tribute to their fallen comrades.

To this day, Trump has not acknowledged the death of Capitol Police Officer Brian Sicknick, who succumbed to his injuries a day after the attack, or the officers who took their own lives in the wake of that awful day.

That point was not lost on two of Trump’s top 2020 campaign aides, who texted each other on Jan. 7 after Sicknick had died.

“Also shitty not to have even acknowledged the death of the Capitol Police officer,” the Trump campaign’s communications director, Tim Mutaugh, texted his deputy, Matt Wolking.

“That is enraging to me,” Wolking replied. “Everything he said about supporting law enforcement was a lie.”

Murtaugh explained Trump’s silence this way: If he talked about the deceased officer, he could be implicating himself.

“If he acknowledged the dead cop, he’d be implicitly faulting the mob. And he won’t do that, because they’re his people. And he would also be close to acknowledging that what he lit at the rally got out of control,” Murtaugh texted. “No way he acknowledges something that could ultimately be called his fault. No way.”

‘I don’t want to say the election is over’: On Jan. 7, Trump still refused to admit he lost

The committee played footage of a videotaped address Trump gave from the White House on Jan. 7 denouncing the attack. It was a tough speech for him to deliver, as the outtakes showed. At one point, he read a line saying, “This election is now over.” He stopped and told his advisers, “I don’t want to say the election is over. I just want to say, ‘Congress has certified the results without saying the election is over, OK?’”

After the footage was shown, Luria said: “One day after he incited an insurrection based on a lie, President Trump still could not say that the election was over.”

After Trump put out his tweet suggesting Pence was a coward, Matthews spoke to the White House Press Secretary, Kayleigh McEnany, and told her Trump needed to condemn the violence and tell the rioters to leave.

McEnany agreed and went into the dining room to see Trump, who put out a tweet at 2: 38 p.m. that said, “Stay peaceful!” McEnany then returned, lowered her voice, and told Matthews that the president didn’t want to include any mention of “peace” in the tweet. His advisers suggested different wording, and his daughter Ivanka finally persuaded him to use the phrase “stay peaceful.”