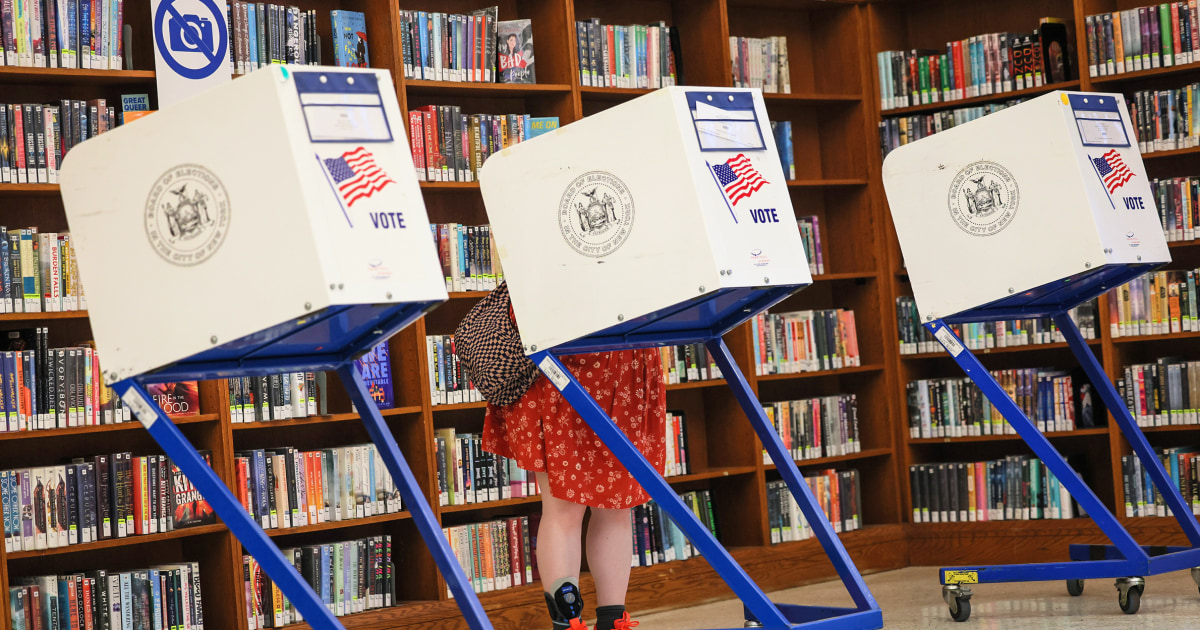 WASHINGTON — Republicans nominated a hard-right state senator Tuesday to take on Illinois Gov. J.B. Pritzker in November, NBC News projects, in a win for both conservatives and Democrats who furtively sought to elevate Darren Bailey over his more moderate primary opponent in the blue state.Richard Irvin, the first Black mayor of Chicago suburb Aurora,…

WASHINGTON — Republicans nominated a hard-right state senator Tuesday to take on Illinois Gov. J.B. Pritzker in November, NBC News projects, in a win for both conservatives and Democrats who furtively sought to elevate Darren Bailey over his more moderate primary opponent in the blue state.

Richard Irvin, the first Black mayor of Chicago suburb Aurora, was widely seen as Pritzker’s most formidable potential challenger and spent $50 million on his primary campaign thanks to support from deep-pocketed GOP donors, helping to make it the most expensive race in the country so far this year.

Democrats sought to derail Irvin and received a major boost in that effort when former President Donald Trump endorsed Bailey on Saturday.

Meanwhile, primaries in other states Tuesday will further test the strength of Trump‘s influence heading into November.

On the Democratic side, turnout for primaries in Colorado, Illinois and New York could offer clues about how much the Supreme Court’s recent decision striking down Roe v. Wade will energize the party’s base this fall.

And meddling in GOP primaries by both Trump and Democrats could have big implications in the November general election.

In New York, NBC News projects Democratic Gov. Kathy Hochul cruised to win her party’s nomination about a year after she took over from disgraced former Gov. Andrew Cuomo. She handily defeated moderate Rep. Thomas Suozzi and progressive New York City Public Advocate Jumaane Williams despite early expectations that she would face a difficult path to winning in her own right.

In Illinois, abortion is set to be a defining issue between Bailey and Pritzker, who wants to use a second to term to make his state a safe haven for women seeking abortions in the post-Roe landscape.

“We’re going to see potentially 10 to 20,000 more women crossing state lines — we already saw 10,000 last year — to exercise their reproductive rights. And we’ve been preparing for this,” Pritzker, a member of the wealthy family that owns the Hyatt hotel chain, said Tuesday on MSNBC. “We believe that people have a right that has been taken away, but we’re going to guarantee it in the state of Illinois.”

Pritzker and Democratic allies took the unusual step of spending significant funds to meddle in the GOP primary by attacking Irvin and boosting Bailey, a state senator from the rural southern part of the state.

According to AdImpact, the data analytics firm, the Pritzker campaign poured $32 million into TV ads in a primary in which he faced only token opposition, with the bulk of the spending targeting Irvin. The Democratic Governors Association spent $18.4 million more.

All of that added up to the Illinois governor’s race ranking as the most expensive in the country in TV ad spending with at least $100 million spent total, according to AdImpact.

Under attack from multiple sides, Irvin was forced to shift his messaging from talking up his biography and qualification to responding to attacks, sapping his momentum.

Democrats also injected themselves into Colorado’s GOP primaries, trying to elevate right-wing candidates seeking to unseat Democratic Gov. Jared Polis and Sen. Michael Bennet. They’re betting that those Republicans will have a tougher time winning in a state where President Joe Biden defeated Trump by more than 13 percentage points in 2020.

In a similar effort in the governor’s race, Democrats spent $1.5 million to boost Greg Lopez, the former mayor of a Denver exurb, over University of Colorado Board of Regents member Heidi Ganahl, who is seen as the most formidable opponent against Polis.

Democrats have also tried to help a Republican state senator, Don Coram, who is running against firebrand conservative Rep. Lauren Boebert. A number of Democrats are also running in the district, which tilts Republican in the general election.

In New York, congressional primaries have been pushed back to August because of legal fights over redistricting, but both parties will select nominees for governor and lieutenant governor Tuesday.

The GOP side, meanwhile, is a tossup. Rep. Lee Zeldin of Long Island, a close Trump ally in Congress, is the nominal front-runner, but he faces the 2014 GOP nominee for governor, Rob Astorino, businessman Harry Wilson and Andrew Giuliani, the son of former New York City Mayor Rudy Giuliani.

With several allies in the race, Trump has stayed away and decided not to endorse any of the candidates in his former home state.

In Utah, Sen. Mike Lee, a Trump ally, is the heavy favorite for renomination, but he faces two primary challengers who didn’t vote for Trump in 2020 and have accused Lee of forgetting about Utah as his national profile has risen.

Vocal anti-Trump critic Evan McMullin is running as an independent against Lee in November. The Utah Democratic Party voted not to nominate its own candidate and to support McMullin instead in the deep red state, where a Democrat would stand little chance of winning.

In Mississippi, two Republican members of Congress faced the prospect of losing their seats Tuesday after they were forced into primary runoff elections.

Rep. Michael Guest, one of the Republicans who voted to create an independent commission to investigate the Jan. 6 riot at the Capitol, won his runoff, NBC New projects.

It’s still too early to call for Rep. Steven Palazzo, who has faced ethics issues and allegations of misusing campaign funds.

Nebraska, meanwhile, will hold a special election to replace former Rep. Jeff Fortenberry, who resigned in March and was sentenced Tuesday to two years’ probation after he was convicted of lying to federal agents in a corruption probe. Two state senators — Republican Mike Flood and Democrat Patty Pansing Brooks — face off against each other in the Republican-leaning 1st Congressional District.

In more than one state with a primary Tuesday, redistricting has pitted members of Congress against each other.

In Illinois, Trump is supporting Rep. Mary Miller, a first-term lawmaker who garnered national attention for saying shortly after being sworn into office that “Hitler was right about one thing” and then earned scorn again over the weekend at a rally with Trump when she called the Supreme Court’s abortion ruling a “victory for white life.” Her spokesperson later said she meant to say “right to life.”

And in Oklahoma, an open Senate seat has created a Republican pileup. Sen. Jim Inhofe’s retirement announcement sparked a crowded GOP primary field that includes Rep. Markwayne Mullin; Scott Pruitt, who was the administrator of the Environmental Protection Agency in the Trump administration; and former state House Speaker T.W. Shannon.