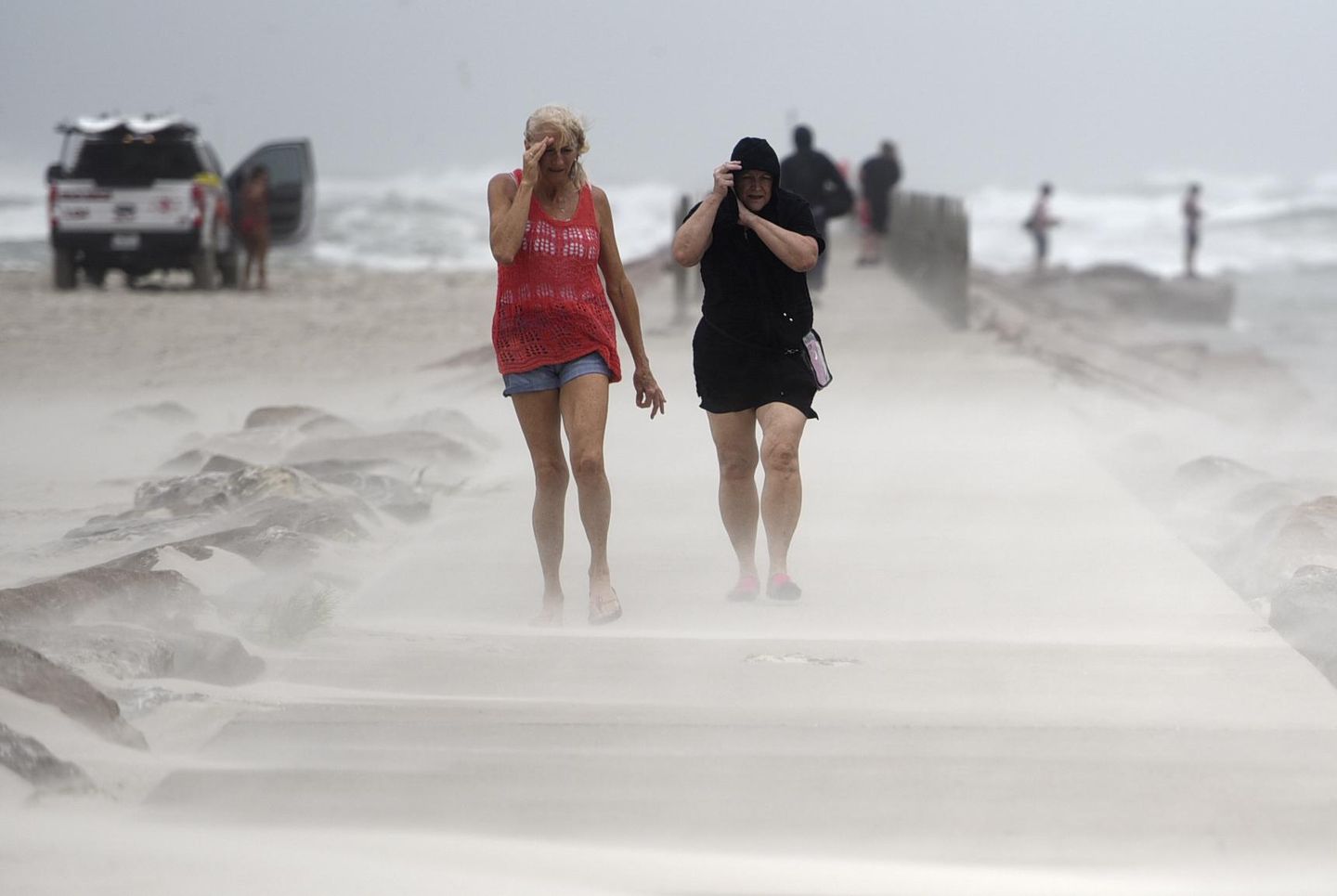 HOUSTON (AP) — Hurricane Nicholas made landfall along the Texas coast on Tuesday, bringing the threat of up to 20 inches of rainfall to parts of the Gulf Coast, including the same area hit by Hurricane Harvey in 2017 and storm-battered Louisiana. Nicholas touched down on the eastern part of the Matagorda Peninsula, about 10…

HOUSTON (AP) — Hurricane Nicholas made landfall along the Texas coast on Tuesday, bringing the threat of up to 20 inches of rainfall to parts of the Gulf Coast, including the same area hit by Hurricane Harvey in 2017 and storm-battered Louisiana.

Nicholas touched down on the eastern part of the Matagorda Peninsula, about 10 miles (17 kilometers) west southwest of Sargent Beach, Texas, with maximum winds of 75 mph (120 kph), according to the National Hurricane Center in Miami. Nicholas was the 14th named storm of the 2021 Atlantic hurricane season.

The storm was moving north northeast at 10 mph (17 kph) and the center of Nicholas was expected to move slowly over southeastern Texas on Tuesday and over southwestern Louisiana on Wednesday.

The biggest unknown about Nicholas was the amount of rainfall it would bring to Texas, particularly in flood-prone Houston.

Nearly the entire state’s coastline was subject to a tropical storm warning, which included potential flash flooding and urban flooding. Texas Governor. Greg Abbott stated that authorities have placed resources and rescue teams in the Houston region and along the coast.

Officials in Houston were concerned that heavy rains expected to hit by Tuesday could flood streets and cause flooding. Authorities deployed high-water rescue vehicles throughout the city and erected barricades at more than 40 locations that tend to flood, Mayor Sylvester Turner said.

This city is extremely resilient. We know what to do. Turner said that they are familiar with preparing for major flood events, which have impacted the Houston area in recent times, including Harvey’s devastating destruction.

Many school districts along Texas’s Gulf Coast cancelled classes Monday due to the upcoming storm. The state’s largest school district, Houston, announced Tuesday that classes would be cancelled. The weather threat also closed multiple COVID-19 testing and vaccination sites in the Houston and Corpus Christi areas and forced the cancellation of a Harry Styles concert scheduled for Monday evening in Houston.

Six to 12 inches (15 to 30 centimeters) of rain were expected along the middle and upper Texas coast, with isolated maximum amounts of 18 inches (46 centimeters) possible. Other parts of southeast Texas and south-central Louisiana and southern Mississippi could see 4 to 8 inches (10 to 20 centimeters) over the coming days.

According to the weather service, a tornado or two could be possible along the southwest Louisiana and upper Texas coasts on Tuesday.

“Watch out for local weather warnings and follow local advices about what is safe and effective. You’ll get through this storm like you’ve experienced many others,” Abbott stated during a Houston news conference.

Nicholas brought rainfall to the same Texas area that was hard hit by Harvey. That storm made landfall in the middle Texas coast then stalled for four days, dropping more than 60 inches (152 cm) of rain in parts of southeast Texas. Harvey was blamed for at least 68 deaths, including 36 in the Houston area.

After Harvey, voters approved $2.5 billion worth of bonds to finance flood-control projects. The 181 projects designed to mitigate damage from future storms are at different stages of completion.

But Brian McNoldy, University of Miami Hurricane researcher, said that Nicholas “will have magnitudes less than Harvey” .”

The problem with Nicholas is how slow it moves. According to Jim Kossin, a hurricane researcher at The Climate Service, storms move slower these days and Nicholas could become stuck between two weather systems.

Louisiana Gov. John Bel Edwards declared an emergency on Sunday night ahead of Hurricane Ida’s arrival in Louisiana. This was in response to historic flooding and Hurricane Laura last year.

The most serious threat to Louisiana lies in the southwest region of the state. This is where Hurricane Laura and May flooding are ongoing.” Edwards stated.

The storm is expected to bring heavy rainfall west of the point where Ida struck Louisiana two weeks ago.

Across Louisiana, almost 120,000 customers remained without power Monday morning, according to the utility tracking site poweroutage.us.

Although Lake Charles was spared the brunt of Ida’s impact, multiple wallops were caused by Hurricane Laura and Hurricane Delta in 2020, which brought heavy flooding to the area.

Lake Charles Mayor Nic Hunt said that the city takes the threat of the hurricane seriously as it does with all tropical systems.

” “Hope and prayer are not a good strategy,” Hunter stated.

Scott Trahan, a coastal Louisiana resident, was still working on repairs to his home after Hurricane Laura. His house was submerged in water for about 2 feet. He expects to have his home finished by Christmas. Many people in his community have chosen to move rather than rebuild, he said.

” If you get your stomach whipped four times, you won’t be able to get up again. Trahan stated that you are going to move somewhere else.