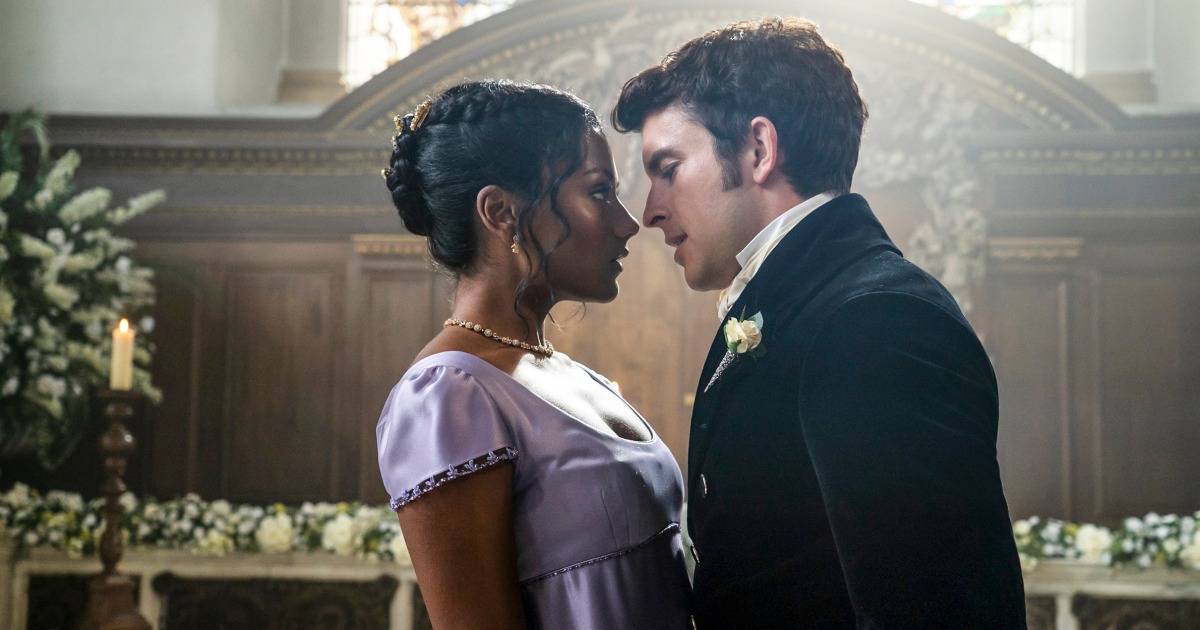 Dearest readers, if you're clicking this headline you likely already have swooned over Netflix's "Bridgerton" series.If you’re in Los Angeles, you may have been transported to the Regency era via the immersive Bridgerton experience at the The Millennium Biltmore Hotel’s Crystal Ballroom, which is as fancy as it sounds.Perhaps you've even watched the reality show dating competition,…

Dearest readers, if you’re clicking this headline you likely already have swooned over Netflix’s “Bridgerton” series.

If you’re in Los Angeles, you may have been transported to the Regency era via the immersive Bridgerton experience at the The Millennium Biltmore Hotel’s Crystal Ballroom, which is as fancy as it sounds.

Perhaps you’ve even watched the reality show dating competition, “The Courtship,” now on USA Network, which some have described as “Bridgerton” meets “The Bachelor.”

That’s because “Bridgerton,” which debuted its second season last week, is everywhere. The latest season of the Shondaland-produced show, based on Julia Quinn’s novels, follows Anthony Bridgerton (Jonathan Bailey), the oldest of the Bridgerton siblings, and his love triangle with the Sharma sisters Kate (Simone Ashley) and Edwina (Charithra Chandran).

The weekend after it was released, season two ranked in Netflix’s top 10 in 92 countries. It also became the streamer’s most-watched English-language TV title during its premiere weekend.

According to experts, the series’ popularity is not a surprise given the obsession with this period of early 19th century British culture.

“Within popular fiction there has been an enduring appeal for romantic stories based in this era, with modern Regency Romance like Julia Quinn’s ‘Bridgerton’ novels being the most recent examples, but among which we can include earlier writers like Georgette Heyerm” said Hannah Greig, a professor at the University of York who was a consultant on “Bridgerton,” “The Favourite” and BBC’s “Poldark.”

“And of course Jane Austen’s novels are exciting romances both written and set in the early 1800s, and their appeal is very apparent.”

Stories set in this era have “long had a global reach and are read and watched around the world,” Greig said. “In this way, even though the time period and even the geographical location may be distant, millions of people read about, engage with and enjoy stories set in Regency England.”

Even though the time period and even the geographical location may be distant, millions of people read about, engage with and enjoy stories set in Regency England.

-Hannah Greig, a professor at the University of York who was a consultant on “Bridgerton.”

And “Bridgerton” has reignited the public’s interest in all things Regency era.

Take the Queen’s Ball. Hosted by Netflix, Shondaland and Fever, the event — currently in Los Angeles, but launching soon in other cities —invites fans to transport themselves to London in the year 1813.

Guests are encouraged to “mingle with other members of the Ton,” aka “the who’s who of British high society during the Regency era, made up of aristocrats and rich upper-crust gentry and named after the French expression bon ton, or good manners,” according to Netflix’s guide to the “Bridgerton” universe.

The event, which was organized during the pandemic, features music, dancing, acrobatic performances, interactive experiences, cocktails and, of course, the “Bridgerton” soundtrack.

“‘Bridgerton’ has seen wonderful viewership and built a wide fan base and we knew that there was an opportunity to allow people to experience the show in a new way,” said Greg Lombardo, head of experiences at Netflix.

“Shondaland has done a fantastic job with really bringing people into this world in 1800 London and Society and it calls upon a time of romance and beauty and also has that tantalizing effect of scandal and gossip that really pulls people in.”

The goal of the event “is to bring immersive experiences to ‘Bridgerton’ fans where they live, and this is a great opportunity to also serve our female audiences,” Lombardo said.

The other goal? To provide joy, Shondaland executive Sandie Bailey told Insider. “We all need to treat ourselves to a little bit of joy — especially in recent times.”

Fans of the Regency era have also recently been able to live vicariously through contestants on “The Courtship.”

On the show, Miss Nicole Rémy, a heroine looking for her duke, is sent to a castle on the countryside, where she is transported back to Regency-style England, to find her match. Her potential suitors must also win over her court (made up of her family members).

From carriage rides to handwritten letters to communicate, she and her potential suitors are sucked into an immersive romantic experience with the end goal of finding true love and bringing it back to 2022.

“The more I spoke to the producers about the show the more I realized that what ‘The Courtship’ offers is a romantic antidote to a lot of other dating formats which, much as I watch and adore them, can occasionally feel a bit grubby,” said host Rick Edwards.

“This show is genuinely sweet and our heroine Miss Remy is treated, quite rightly, like a princess. And the addition of her court — her parents, sister and best friend — has made for some really fun telly.”

Edwards said it makes sense that a show like “The Courtship” was greenlit.

“Given how popular dating shows are, and how popular ‘Bridgerton’ is, it seemed almost inevitable that someone would combine the two,” he said. “We knew that in ‘transporting people back to Regency-era England’ we were doing something quite silly. And I’m glad that we — by which I mean I — had some fun with that.”

When asked why he thinks the Regency era is so popular, Edwards said he thinks “people love the buttoned-up etiquette, the strict social structures, and then the subversion of both — when you know it’s against the rules, those steamy and illicit liaisons carry even more heft.”

“Without getting too deep, I also think when this genre first emerged, it centered female desires and wants, which would have been unusual and exciting and progressive,” he said. “Which is perhaps one the reasons it has endured.”