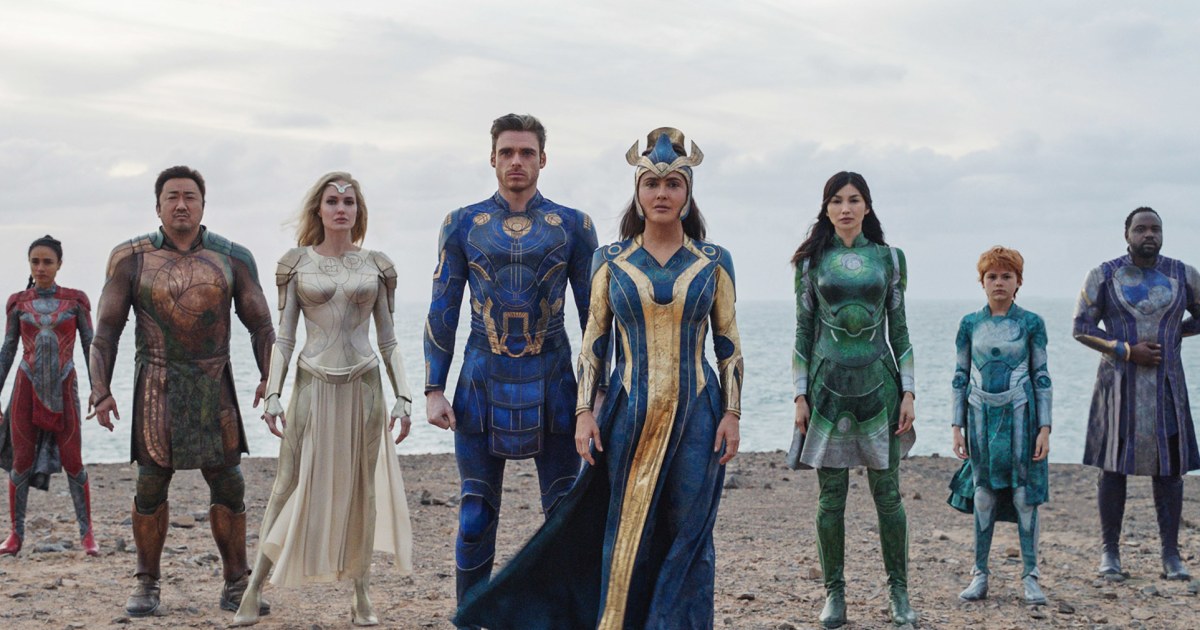 As the cool weather sets in, hot new releases with queer themes and characters are hitting theaters and streaming platforms. From a Marvel superheroes feature to a Princess Diana biopic, commercial and indie films highlight LGBTQ romances, while reality shows stir up controversy on the small screen. And, across the board, fraught period pieces reign…

Check out this list of queer-inclusive films and shows to watch as the year winds down.

The Marvel Cinematic Universe is getting a new band of superheroes. An ancient team of aliens who have been living in secret on Earth for thousands upon years are forced to leave the shadows after an unexpected tragedy. “Eternals” is directed by Chloe Zhao (“Nomadland”) and features Marvel’s first openly homosexual hero, couple, and kiss. It involves Phastos (Brian Tye Henry) as well as his mortal husband Ben (Haaz Seleiman). The couple also has a son living in the suburbs, as if it wasn’t enough to save the world.

The Peabody Award-winning series about the early life of great American poet Emily Dickinson is back for its third and final season. The final chapter is set during the Civil War and features Emily (Hailee Sternfeld) struggling with her complicated relationship with Sue. Despite the solemn backdrop, audiences can expect the series’ usual campy, stylized take on mid-19th-century living, along with a new host of comedic favorites playing historical characters: Ziwe as Sojourner Truth, Billy Eichner as Walt Whitman and Chloe Fineman as Sylvia Plath.

Director Pablo Larrain’s Princess Diana biopic, starring Kristen Stewart in the title role, portrays three eventful days during the royal’s 1991 Christmas holiday. The film is similar to Larrain’s Jacqueline Kennedy biopic “Jackie”. In it, arguments over bulimia, infidelity, and marriage lead to the separation of Princess Diana and Prince Charles. The film’s authenticity — which includes a secret romance between Diana, a member her inner circle — will be a mystery to audiences. It is also sure to irk royal feathers.

A young group of lesbians takes on the queer dating scene in Tampa Bay, Florida, in a new docuseries from Amazon Studios. “Tampa Baes” isn’t the first lesbian-centered unscripted show of its kind — the most notable being Ilene Chaiken’s 2010-2012 Showtime series, “The Real L Word” — though it is a rarity in the larger landscape dominated by mainly heteronormative franchises like “The Real Housewives.” Whether that will be enough for audiences to tune in remains to be seen. The show attracted some early, and presumably unwanted, attention in the form of accusations about colorism and a lack of inclusivity based on promotional materials of the cast.

After fighting to save their family’s taco shop from gentrification in the first season, the Morales clan now faces the terrifying prospect of their grandfather’s deportation. Karrie Martin plays Ana Morales, an actress playing a young queer artist. Ana and Yessika’s childhood friend hit a snag last season as they faced the reality of being young, brown activists in an ever-changing world. Will Ana and Yessika be able to work out their differences or will they move on to something new?

Inspired by Nella Larsen’s 1929 novel, the black-and-white film follows two childhood friends who choose two very different paths. After 12 years apart, Clare (Ruth Negga) and Irene (Tessa Thompson) reunite in 1920s New York at the height of the Harlem Renaissance. Both Black women are on opposite sides. Clare is in the upper echelon and Irene is in the lower echelon. Clare, who plays with fire, becomes white when she marries a wealthy racist. The film explores issues of race and identity. Both women discover new ways to grow their love for one another as they dive into the film.

“Passing” will be available on Netflix on Nov. 10.

“Mayor Pete” will be available on Amazon Prime Video on Nov. 12.

‘The Power of the Dog‘

Benedict Cumberbatch and Kirsten Dunst star in this new Western drama from Jane Campion (“The Piano”). In “The Power of the Dog,” a domineering rancher, Phil Burbank, played by Cumberbatch, faces a crisis of self amid the toxic masculinity and repressed sexuality of Montana in 1925. Phil’s brother brings back a wife and son. This leads the hyper-masculine lead character down a path to cruelty and desire.

The eccentric world of big cats in captivity is returning for its sophomore season. Joe Exotic — the gay, polygamist zookeeper who became a cultural sensation when the show premiered during the early days of the pandemic — is still in prison after being found guilty in a murder-for-hire plot targeting fellow “Tiger King” star Carole Baskin. Exotic is not being kept out of the spotlight by this trailer. Although it’s not clear if Exotic, Baskin, or other characters will be the main focus of the new season. Netflix promises that the show will still have the same chaotic energy.

In the next installment of this historically diverse iteration of the cult classic series, the crew faces a massive, invisible anomaly that threatens life across the galaxy. Last season, the show introduced new fan favorites Adira (Blu del Barrio) and Gray (Ian Alexander), the franchise’s first nonbinary and transgender characters, respectively. Although the details of the new season are still unknown, Alex Kurtzman (co-showrunner) and Michelle Paradise (producers) have confirmed that Gray and Adira will remain prominent characters in “Discovery.”

Writer-director Stephen Karam has adapted his Tony-winning play into an unnerving film about existential dread, perfectly timed for the holidays. The Blake family reunites in “The Humans” on Thanksgiving Day in the rundown apartment that Brigid Blake (Beanie Fieldstein) and Richard (Steven Yeun) share in New York’s Chinatown neighborhood. The family deals with a variety of traumas, including the crushing of breakups and the need to balance the elder care costs. They are trapped in Karam’s chamber drama. June Squibb and Richard Jenkins are also part of the star-studded cast. Amy Schumer plays Brigid’s older sister Aimee Blake, a sarcastic, lesbian character who is grieving for her long-term relationship.

In case you missed it …

‘The Eyes of Tammy Faye’

Based on the RuPaul-narrated 2000 cult documentary of the same name, the film stars Jessica Chastain as televangelist Tammy Faye Bakker. In it, Bakker’s groundbreaking 1985 interview with a gay Christian pastor living with AIDS takes center stage.

“The Eyes of Tammy Faye” is now in theaters and available for purchase on Amazon Prime Video and iTunes.

The three-part docuseries looks back on filmmaker Ry Russo-Young’s childhood during the late ’70s and early ’80s, and her lesbian moms’ historic lawsuit, which played a crucial role in validating the legal existence of LGBTQ families.

“The Morning Show,” starring Jennifer Aniston and Reese Witherspoon, dramatizes the lives of newsmakers who wake up with America every day. Julianna Margulies joins the latest season as Witherspoon’s love interest — an A-list television anchor who climbed back to the top of her field after being fired for being a lesbian in the late ’90s.

“The Morning Show” season two is on Apple TV+.

The lead character in this unabashedly violent film, which won the top prize at this year’s Cannes Film Festival, is a gender-bending psychopath with a dangerous attraction to motor vehicles and an apathetic view on human life.

“Titane” is in theaters and available for purchase on Amazon Prime Video and iTunes (if you have the stomach for it).

The influential drag competition series is back in the United Kingdom, with 12 new queens vying to make herstory — including the franchise’s first-ever cisgender woman contestant. Drag Race U.K. is a show that combines British humor with snarky, mid-tier looks. This has made it one the most popular international versions.

The new talk show, centering the voices and experiences of Black and brown queer people.

“The House” is available on Fox Soul.

The reality show led by “RuPaul’s Drag Race” alums Bob the Drag Queen, Eureka O’Hara and Shangela is back on the road recruiting for one-night-only drag shows across the country.

The new documentary, which was released Oct. 11, National Coming Out Day, details gay activists’ yearslong battle to get the American Psychiatric Association to remove homosexuality from its list of mental disorders.

Monica Raymund (“Chicago Fire,” “The Good Wife”) stars as Jackie Quinones, a hedonistic federal agent whose life is thrown into disarray when she discovers the body of a murdered woman. Quinones’ identity as a queer Latina is notable in the crime genre, in which leads are typically played by white straight men.