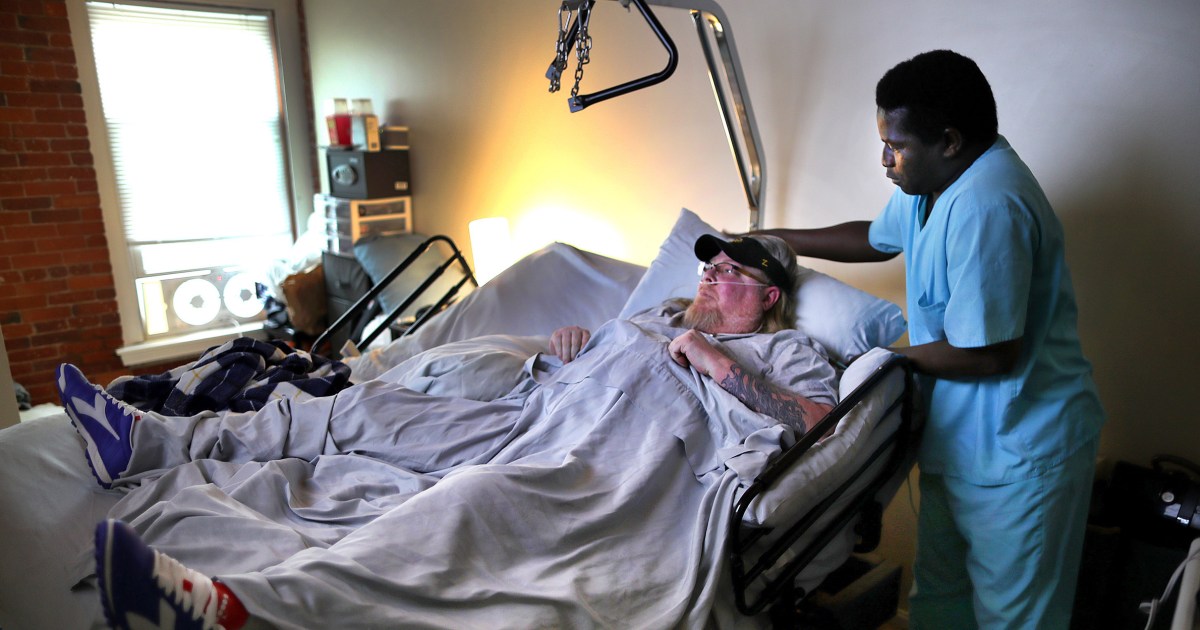 Angela Phillips-Mills’ mother, who is in her late 70s, has had two serious abdominal surgeries this year, including one shortly before President Joe Biden’s inauguration and another in September. Her mother will be coming home from a rehabilitation center this week, but her insurance is going to pay only for about six to eight weeks…

Angela Phillips-Mills’ mother, who is in her late 70s, has had two serious abdominal surgeries this year, including one shortly before President Joe Biden’s inauguration and another in September. Her mother will be coming home from a rehabilitation center this week, but her insurance is going to pay only for about six to eight weeks of home care. She’ll likely need much more than that. Anything additional will have to be paid for out of pocket at about $60 an hour.

“My mom barely breaks the poverty level on her Social Security. We’re not asking for the kind of benefits that people of means take for granted. We’re just asking not to be put in a strained financial position,” said Phillips-Mills, a 58-year-old accountant who has cerebral palsy.

Increasing home- and community-based services for older and disabled people is part of the current framework of Biden’s Build Back Better bill, which seeks to expand the nation’s social safety net.

Congress has been scrambling to try to finish hammering out an agreement on the centerpiece of Biden’s legislative agenda, but those who advocate for and work in the home care industry, as well as those in need of services, already view the proposed spending plan as a long-awaited and critical first step to reducing backlogs for care and expanding home-based services.

“The demand has for decades far exceeded what the capacity is within the system,” said Eric Buehlmann, deputy executive director for public policy at the National Disability Rights Network. “It’s not that the system can’t do it. The fact is that the investment and the movement of funds and resources has not followed the same robustness.”

People in need of home care often must qualify for home- and community-based services waivers under Medicaid, the state and federal program providing health care coverage for those with low wages.

More than 800,000 people who are eligible for care under Medicaid have been unable to receive it because of backlogs and funding, the White House said in social media post.

“We’re going to expand services for seniors so families can get help from well-trained, well-paid professionals to help them take care of their parents at home — to cook a meal for them, to get their groceries for them, to help them get around, to help them live in their own home with the dignity they deserve to be afforded,” Biden said last month.

Biden’s original proposal of $400 billion in investments for home- and community-based services was reduced to $150 billion during negotiations.

Vicki Hoak, the executive director of the Home Care Association of America, said the organization was “disappointed” by the reduction in proposed funding, “but we also recognize that this is a very big step and it’s about consensus and reaching compromise.”

“I just hope that people realize that we really do need to have some kind of strategy for taking care of this growing elderly population in this country. So it’s really critical,” she said.

Patti LaFleur, 35, quit her job as a teacher to help take care of her mother, Linda LaTurner, 73, who has dementia and Type 1 diabetes and requires 24/7 care. They live in the Seattle area and receive home care part time.

“She doesn’t have enough money to make it to the end of her life. But she has too much money to qualify for Medicaid. So she’s in this weird middle spot that there’s no support for,” she said.

Payment for her mother’s home care is privately funded with money her parents put aside.

“When that money runs out, hopefully Medicaid takes over,” but it wouldn’t cover all of the services her mother receives, LaFleur said.

“So then if I wanted her to continue doing that, then my husband and I would be funding her,” she said.

While she said she’s “totally disappointed” that the current funding in the bill will be lower than the previously proposed $400 billion, “it’s a first step.”

“It’s just so important to me that we’re raising awareness and we’re starting to have these conversations and starting to value and talk about and support the elderly and the people providing their care,” she said.

One component of the Build Back Better bill is funding to improve wages for people who provide home care.

“It’s a life-changing investment in the primarily Black, brown, Asian and immigrant women that provide home care in this country because it will give the resources to take poverty-wage jobs and make them living-wage jobs,” said Mary Kay Henry, president of the Service Employees International Union, which represents home care workers.

The union has been advocating for the $400 billion Biden previously proposed, but she said the current proposal is still “twice as much of an increase as we’ve ever seen in home care funding in the 40-year history of the program.”

Al Cardillo, the president and CEO of the Home Care Association of New York State, said the funding was “critically important” in making sure “there’s enough of the personnel and the people to provide the services.”

“Unfortunately we see many stories of people in areas of the country that have qualified for home- and community based services, but there’s no one to provide those services,” he said.

Having additional workers to provide services could make a difference for Jane Browning, 73, who helps care for her son Paul, 38, who has Down syndrome.

He lives in group living in Arkadelphia, Arkansas, where he is provided supervision, Browning said.

“He requires 24-hour supervision. They have people who come in to help him, dinner and transportation, and somebody stays overnight every night. He’s never left alone,” she said.

Initially, he was able to live in the group program seven days a week. But it was reduced to five days after state funding was cut, Browning said. Browning and her husband now provide care to him on the weekends. Her son has been on a waiting list for additional services for a decade.

“Paul is a lovely, lovely person. We enjoy him, and having him in our house every weekend is great. There are lots of people on the waiting list for whom this is not a pleasant experience. They have people who are very difficult to live with, and really they need assistance badly,” she said. “But we do, too, because we are aging. I’m 73, and my husband is 72. I have my complicating health issues as you do as you get older. We can’t keep this up forever.”

“The ultimate outcome will be, if they don’t get him funded now, then when we are no longer able to care for him, he goes into the institution anyway,” Browning said. “So it’s just very, very aggravating because it’s unnecessary. It’s a preventable situation.”

She said funding for home- and community-based services was an “urgent situation” both “for the families who are struggling every day and for the workers who are living with miserable compensation.”

“They have families, too. I feel like it’s a long-simmering chronic crisis,” she said.

Of the Build Back Better bill, Browning said: “I would love to see all of that funding come through, but even at half of whatever was proposed, it will go a very long way and is urgently needed. Every bit we can get is a step up.”