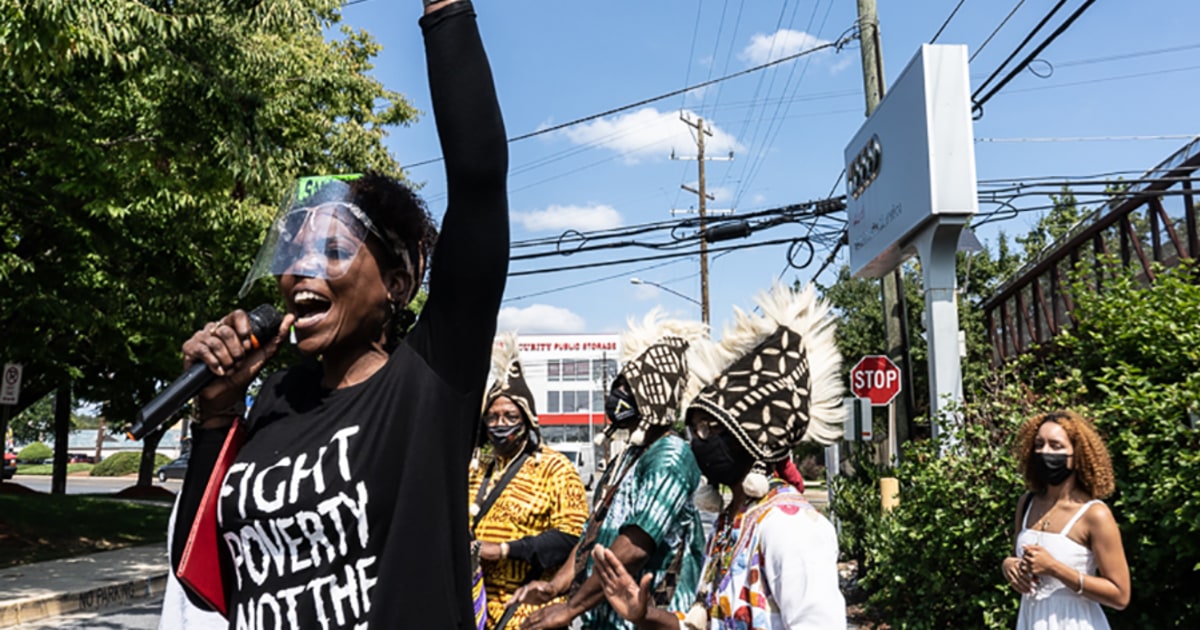 In the shadow of a 15-story apartment complex overlooking a suburb of Washington, D.C., an asphalt-paved parking lot is at the heart of a development dispute.The conflict is over what community members in Montgomery County, Maryland, say lie inconspicuously below: potentially hundreds of bodies of freed slaves and their descendants, buried in what was once…

In the shadow of a 15-story apartment complex overlooking a suburb of Washington, D.C., an asphalt-paved parking lot is at the heart of a development dispute.

The conflict is over what community members in Montgomery County, Maryland, say lie inconspicuously below: potentially hundreds of bodies of freed slaves and their descendants, buried in what was once a cemetery in the early 20th century.

“These are people who were so oppressed and so discarded and so disrespected in life, and now, even in death, they meet the same fate,” said Marsha Coleman-Adebayo, president of the Bethesda African Cemetery Coalition, which formed in 2019 and whose members are seeking to preserve what is known as the Moses African Cemetery.

A lawsuit filed last month by the coalition seeks to block the county’s pending $50 million sale of the apartment complex property, Westwood Tower, to the investment firm Charger Ventures. According to the suit, Montgomery County’s Housing Opportunities Commission violated state law by failing get court approval for sale of Westwood Tower. This is necessary when cemetery property is involved.

The coalition won this month’s court battle when a Montgomery County judge issued an interim restraining order that would block the sale of cemetery property until Monday. A second hearing will be scheduled. The judge will decide whether or not to grant an interim restraining order, which would prevent further sale of the property until the lawsuit is settled. The deal could still proceed if the judge grants an injunction.

It is not clear what will happen to the parking lot property. At this month’s hearing, Steven Lieberman, a member of the coalition, stated that he thinks a developer might end up exploiting the property.

The Housing Opportunities Commission declined to comment. Charger Ventures did not immediately respond to a request to comment.

The friction in Montgomery County, which is majority white and one of the wealthiest counties in the U.S., is only one example of a larger effort nationwide to investigate and preserve historic Black gravesites, many at risk of being forgotten or destroyed — if they’re discovered at all — said Lynn Rainville, an anthropologist and director of institutional history and the museums at Washington and Lee University in Lexington, Virginia.

The sites are endangered for a variety of reasons, she said — development, a lack of historical record-keeping, no political willpower to save them or even climate change. Rainville stated that although this topic is not top of the list, because we must focus on the living, it shows systemic racism permeates all aspects of life, from birth to death to burials. “

‘We lost a piece of our history’

On a recent afternoon this month, they sang spirituals, beat on African drums and marched with signs: “Black Lives Matter in Life and in Death. The regular protests at Westwood Tower have attracted many members and supporters to the Bethesda African Cemetery Coalition.

” What happened to respecting holy ground? Montani Wallace asked, and Montani Wallace replied that her husband was buried in Moses Cemetery. “As a family we lost a piece our history and ancestral connection. “

The cemetery is what’s left of a historic Black community in Bethesda’s River Road enclave. White’s Tabernacle No. 1 is the chapter of a Black fraternal organization. 39, bought the 1-acre parcel in 1911.

The chapter had operated a cemetery, which historical records indicate included about 200 graves, and members planned to relocate them to its new property. Many of the people interred in Moses Cemetery are former slaves or people who worked on the tobacco and farmlands around the area prior to the Civil War.

In 1958, as Black families along River Road were squeezed out by development, White’s Tabernacle sold the cemetery property. Part of the land became the home of the parking lot for Westwood Tower, built in 1968.

While records are not clear about what happened to the graves, many people recall stories of workers digging up bones and disposing of them dozens of feet away from a storm drain. The former cemetery site was lost in history for decades. In 2016, Macedonia Baptist Church, the “sole surviving cultural institution” of the local Black community, began an advocacy campaign to commemorate the parcel, according to a historical report in 2018.

While Lieberman said no one has used radar equipment or dug up the land to determine how many graves there may be, there is enough evidence through records to indicate the existence of bodies, estimating that there as many as 500. Frederick A. Douglas was a Housing Opportunities Commission lawyer who questioned the urgency of the coalition to stop a sale and the validity the historical evidence.

He lampooned the coalition’s messaging: “‘I’ve got 500 graves under this parking lot, and they’re going to be desecrated by this mean, bad developer and HOC, this entity that does things in the dark at night. To say that HOC continues that evilness by selling that particular property that has graves…is a bit excessive,” Douglas said.

The coalition has urged Montgomery County Executive Marc Elrich, a Democrat, to stop the sale.

Before the coronavirus pandemic, Elrich had held meetings about Moses Cemetery with the community. Elrich said that he was open to continuing discussions and urged county park and planning officials not to be afraid of engaging with residents.

He said that his hands were tied because he does not have the power or authority to sell the property. He said he would prefer an independent assessment to record the true extent of what is beneath the land. This must be documented.

” “There is a long history in which Black history has been destroyed and the remains of their culture and their memories have been destroyed,” Elrich stated. This is important. “

‘A metaphor for the larger narrative’

Archaeologists and community groups throughout the country are undertaking similar preservation efforts.

Unmarked Black graves have been discovered in places like Elizabeth, New Jersey; Clearwater, Florida; and Clemson, South Carolina. In Tulsa, Oklahoma, bodies have been exhumed over the past year potentially connected to the 1921 Tulsa Race Massacre, one of the worst episodes of racial violence in U.S. Histories

It is difficult to determine the exact number of these sites.

Rainville stated that for every cemetery for whites that exists, there should also be one for African Americans. Research shows that many cemeteries have been destroyed by expanding highways or other projects. She said that there are no rules about how property should be maintained, but federal laws help ensure that any human remains found are not destroyed.

Some academics have called for federal protection of historic Black burial sites modeled after the Native American Graves Protection and Repatriation Act, a 1990 law that says Indigenous human remains and funerary objects “must at all times be treated with dignity and respect. “

In December, the Senate passed bipartisan legislation to create a nationwide network to account for and preserve African American burial grounds. A similar bill was blocked in the House.

The Rev. William J. Barber II is co-chairman of the Poor People’s Campaign which advocates for economic justice. He said that more conversations are required to correct the wrongs committed against Black families and their ancestors in Montgomery County.

” This cemetery is a metaphor to the larger story of land theft that occurs to Black communities as well as Native communities, Latino communities, and poor white communities,” he stated. Barber stated that developers could make a profit in Bethesda by purchasing properties that were once owned by Black people. However, an accounting must be done to determine who was benefited and the cost of repaying descendants.

“Developers literally built their wealth on top of other people’s graves,” Barber said. Think about how ugly that is. “