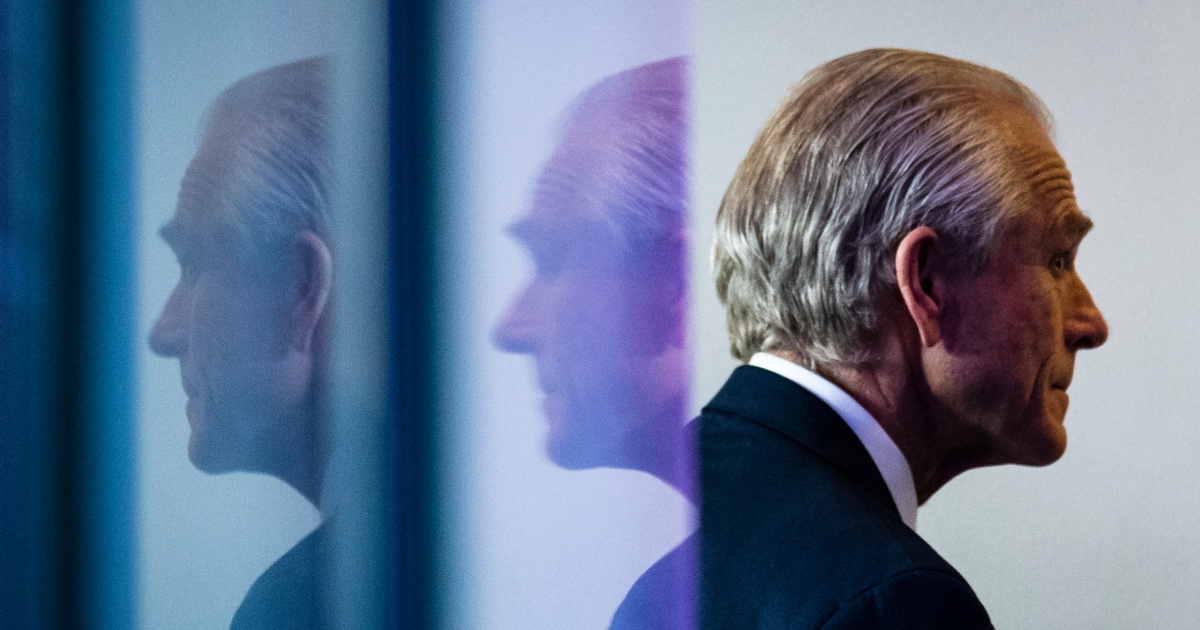 Former Trump White House adviser Peter Navarro was arrested at an airport Friday on contempt of Congress charges — allegations he vowed to fight.Navarro, 72, was indicted by a federal grand jury Thursday after snubbing a subpoena from the House committee investigating Jan. 6 seeking testimony and documents.Court documents indicate the government requested Navarro's indictment…

Former Trump White House adviser Peter Navarro was arrested at an airport Friday on contempt of Congress charges — allegations he vowed to fight.

Navarro, 72, was indicted by a federal grand jury Thursday after snubbing a subpoena from the House committee investigating Jan. 6 seeking testimony and documents.

Court documents indicate the government requested Navarro’s indictment be sealed until his “arrest operation is executed.”

In a court appearance Friday, Navarro said he was arrested at the airport while en route to Nashville for a television appearance, later telling reporters it was for a show hosted by former Arkansas Gov. Mike Huckabee.

He was released without bail and ordered to return to the Washington, D.C., court on June 17.

In a court filing, the government said it didn’t want to warn Navarro about the arrest ahead of time because it “would give the Defendant the opportunity to flee, tamper with witnesses or evidence, or take other steps to interfere with the criminal case.”

The grand jury indictment says Navarro is a “private citizen” and that he never appeared before the House committee or asked for an extension of time after he was subpoenaed.

“In fact, NAVARRO had not communicated with the Select Committee in any way after receiving the subpoena on February 9, 2022,” the indictment alleges, until Feb. 27, when he claimed in an email that his “hands are tied” because former President Donald Trump invoked executive privilege. The committee told him he could assert executive privilege on a question-by-question basis during his deposition, and noted there were topics they planned to ask him about that would not raise ‘any executive privilege concerns at all,” but Navarro still failed to appear, the indictment says.

Navarro on Friday called the House panel a “sham committee” that is “working in collusion with the White House.”

The House voted to refer Navarro to the Justice Department for contempt in April. The committee has said Navarro, a trade adviser during the Trump administration, played a key role “in the ex-president’s effort to overturn the 2020 election.”

Navarro said executive privilege prevented him from talking to the committee, and that he would only do so if Trump gave him the green light to do so. The Jan. 6 committee has noted that Navarro has publicly boasted about his plans to upend the election results and that he published a book last year in which he referred to the plan as the “Green Bay Sweep.” Navarro also said publicly that Trump was “on board with the strategy.”

Navarro sued the House committee earlier this week, arguing the subpoenas should be dismissed. In the same filing, he said he’d been subpoenaed to testify before a federal grand jury this week and turn over documents related to the Jan. 6 riot, including “any communications with former President Trump and/or his counsel or representative.” He said the subpoena called for him to respond by Thursday.

Navarro was asked in an interview with MSNBC’s Ari Melber Thursday night if he had complied with that subpoena, and said he was in “negotiations” with the Justice Department and was “taking this very seriously.” He later said in the same interview he’d “responded to them, and I expect responses back from them.”

He also told Melber he was concerned about going to prison, given that he’s 72 and “the average life span in America for an American male is 76 years old.”

“If I were to go to prison for a year, which is what the contempt of charge could do to me, that would be about a fourth of my remaining life,” Navarro said. Later in the interview, he told Melber he considers the executive privilege issues in his case to be extremely important. “This is why I’m fighting. This is why I’m willing to go to jail for this,” Navarro said.

During Friday’s court hearing, Magistrate Judge Zia Faruqui suggested to Navarro that he should be mindful about his public comments. “Every time you speak, you could be putting yourself at risk,” the judge said.

At one point, Navarro told the judge he plans to ask that his civil suit be heard before the criminal case against him can proceed. “This is something that needs to get to the Supreme Court,” he said.

Navarro called the misdemeanor criminal charges “a preemptive strike by the prosecution” against his lawsuit, even though he was subpoenaed before he filed suit.

Navarro, an economist and author, told the judge he’s “likely” to represent himself in the criminal case. “I don’t want to spend my retirement savings on lawyers,” he said.

Navarro is the second person to be charged with criminal contempt of Congress for refusing to cooperate with the Jan. 6 committee.

Steve Bannon, a former Trump White House adviser, was indicted on a contempt of Congress charge in November after he refused to answer the House committee’s questions. Unlike Navarro, Bannon was allowed to surrender. He has pleaded not guilty.

The Justice Department has yet to act on two other referrals the House has sent involving other former top Trump staffers who’ve refused to cooperate with the panel’s investigation, former White House chief of staff Mark Meadows and deputy chief of staff — and former White House social media director — Dan Scavino. The Meadows referral was sent in December and Scavino’s was sent with Navarro’s in April.