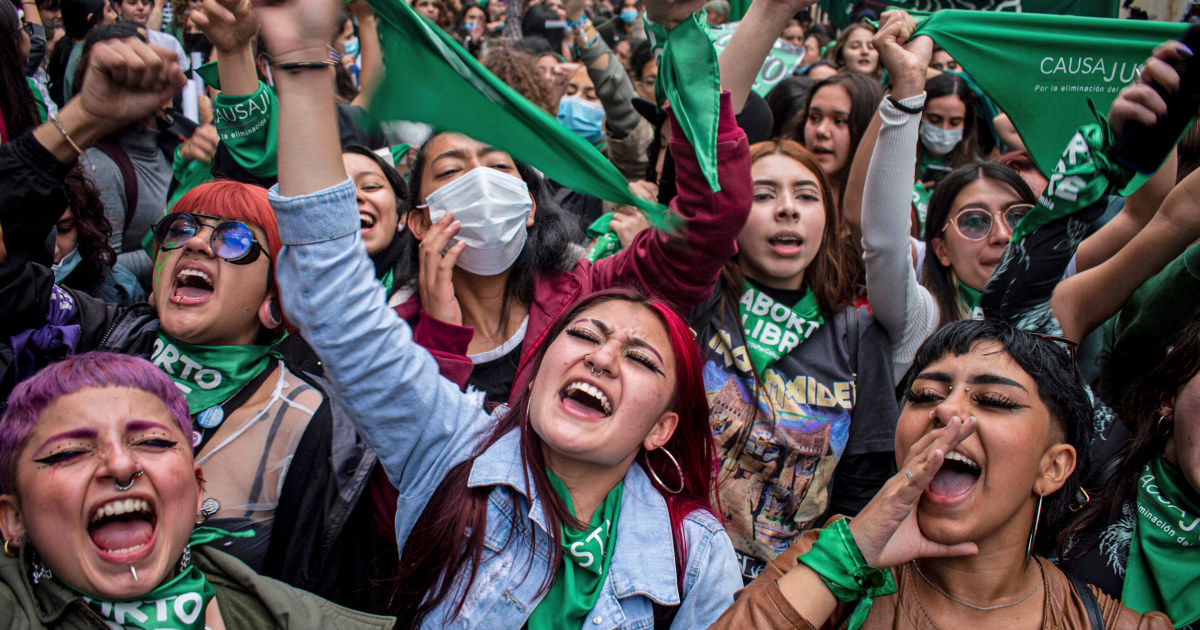 A leader of Latin America’s “green wave” movement for reproductive rights, earlier this year Avila-Guillen helped legalize abortions for women up to 24 weeks-pregnant in her native Colombia, which now joins Argentina and parts of Mexico in the short list of places in Latin America where terminating a pregnancy is no longer a crime.

But it took time and arduous work: at least 15 years of civil and legal advocacy and mobilization.

“It’s a marathon, not a sprint,” said Avila-Guillen, executive director of the New York-based Women’s Equality Center. “We need to be here for the long fight.”

In the U.S., she said, focusing on advances on how abortion is provided — including the ability to receive abortion pills by mail — as well as pushing for congressional legislation to codify abortion rights could help restore sooner some of the rights lost.

International legal and human rights organizations have been helping women for decades in El Salvador, which has a total abortion ban. Women who suffer miscarriages and stillbirths have been wrongfully sentenced to years in prison.

“Imagine, in that profound moment of trauma — women are being criminalized and sent to jail. That’s what’s happening to lots of women in El Salvador,” said Yanira Arias, a Salvadoran American who is a national campaign manager at Alianza Americas, a group that works with migrant communities in the U.S. and Latin America.

Over the past two decades, El Salvador has prosecuted at least 180 women who experienced obstetric emergencies, according to the Citizen Group for the Decriminalization of Abortion, which has been working to free those women since 2009.

Sixty-five imprisoned women have been released with the help of the organization as well as international groups and legal advocates like Avila-Guillen, who said that criminalizing abortions disproportionately impacts low-income women of color, LGBTQ people and immigrants — particularly those who are undocumented.

Arias, who is currently based in Puerto Rico, is fighting efforts by local lawmakers in the U.S. territory to restrict abortions as she points to what has taken place in her native country.

The Supreme Court removed the constitutional right to an abortion in a 5-4 vote — a move that essentially represents the culmination of a decadeslong push by conservatives, religious activists and advocates who oppose abortion.

“Change doesn’t happen in a day, in a year, or in one election cycle. We got here over decades of carving away access to birth control, sex education, abortion access,” said Kierra Johnson, deputy executive director of the National LGBTQ Task Force, which has been advocating for abortion rights. “We have to think 30 or 40 years out. That’s going to require us to be active locally, federally, and across issues.”

Johnson said it’s not enough to have the majority of the American public “on our side.”

“Public opinion means very little without grassroots power,” she said. “It’s not enough to be mad.”

In Latin America, there have been steady gains as women and rights groups have continued to exert pressure over the last decades. Mexico’s Supreme Court ruled earlier this year that an underage girl can get an abortion without parental consent if she has been raped. And in May, the southwestern state of Guerrero voted to allow abortions, the ninth of the country’s 32 federal entities where women can legally end pregnancies.

“This could have absolutely been prevented. Elections do matter,” said Laura Esquivel, a director of national advocacy at the Hispanic Federation, a nonprofit involved in Latino-focused policy and community activism. Esquivel was referring to how former President Donald Trump and a Republican Senate were able to appoint three conservative Supreme Court justices who ultimately helped break the nearly 50-year-old legal precedent of Roe v. Wade.

It remains unclear whether abortion could become a deciding issue among Latino voters — including those who have come from countries with much more restrictive abortion laws.

Latinos in the U.S. have long been stamped as being anti-abortion, but polls have found that such a sweeping label doesn’t apply.

According to the Public Religion Research Institute, “Hispanic Americans are the most divided“ on the issue of abortion, expressing slightly more opposition (48%) than support (45%) in 2019. Place of birth and religious affiliation are the two factors that most influence Latinos’ views on abortion, as well as age, the Public Religion Research Institute found.

But a Pew Research Center survey last year found that 58% of Hispanics believed abortion should be legal in all or most cases, about the same as white people, 57%. Forty-two percent of Hispanics and 40% of white people thought it should always be illegal.

Abortion rights advocates hope mobilization such as that seen in Latin America will provide tangible results down the line.

“Historically, the fact that Roe v. Wade happened in 1973, it was the result of an organizing effort,” Arias said. “So now, we need to get back to the drawing board and understand that this is an opportunity to continue to fight.”