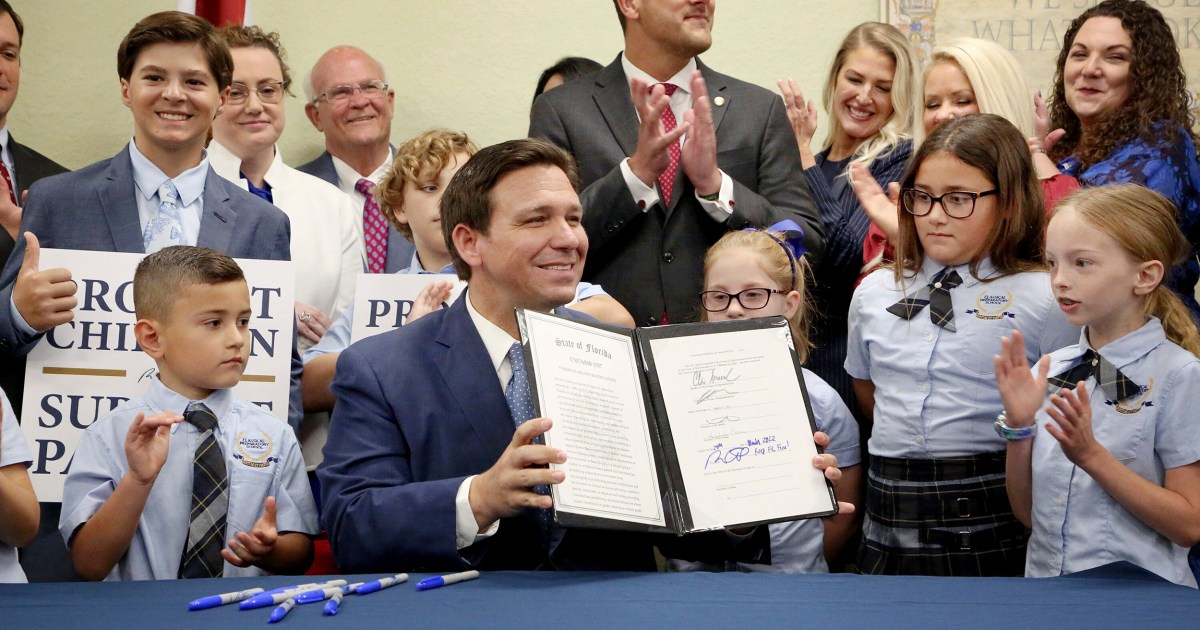 On Monday, Florida Gov. Ron DeSantis signed into law the Parental Rights in Education bill. Dubbed the “Don’t Say Gay” bill by its critics, HB 1557 contains a crucial provision that may seem harmless on its face — but it undermines the fundamental free speech and due process rights of Florida teachers, students and families.We…

On Monday, Florida Gov. Ron DeSantis signed into law the Parental Rights in Education bill. Dubbed the “Don’t Say Gay” bill by its critics, HB 1557 contains a crucial provision that may seem harmless on its face — but it undermines the fundamental free speech and due process rights of Florida teachers, students and families.

We can assume straight teachers are less likely to be caught in the crosshairs of HB 1557 than their LGBTQ colleagues.

The provision reads: “Classroom instruction by school personnel or third parties on sexual orientation or gender identity may not occur in kindergarten through grade 3 or in a manner that is not age appropriate or developmentally appropriate for students in accordance with state standards.” Parents may enforce this provision by suing the school district for injunctive relief, damages and attorneys’ fees.

On its face, these requirements may seem innocuous. After all, many people might feel some discomfort at the thought of kindergarteners receiving instruction “on sexual orientation.” And who could argue against prohibiting instruction on sexuality — or any topic for that matter — that isn’t “age appropriate or developmentally appropriate”?

However, a moment’s reflection reveals just how vague these prohibitions are. Nowhere does HB 1557 define its operative terms: “instruction,” “on sexual orientation,” “on … gender identity,” “appropriate” or “third parties.”

For example, if a teacher who happens to be gay mentions her wife by name when describing what she did with her family over winter break, thereby expressing the fact that she’s married to a woman, does that count as “instructing” students “on sexual orientation”? What if a teacher — gay or straight — assigns a math problem that mentions that “Sally has two moms”? For that matter, if a second grader with two dads draws a picture of her family and shares it with her classmates, does that constitute a “third party” providing the verboten instruction?

A well-drafted law would define its terms carefully. Precisely because HB 1557 does not do so, it could be read to prohibit any of these activities. Yet the U.S. Constitution does not tolerate that degree of vagueness.

Sixty years ago, the Supreme Court considered another Florida law passed in the context of a moral panic that subjected public school employees to an unconstitutionally vague prohibition. Cramp v. Board of Public Instruction involved a McCarthy-era loyalty oath that required all public employees to swear that one “has not, does not and will not lend aid, support, advice, counsel or influence to the Communist Party.”

After noting the “extraordinary ambiguity” of this language — what if you once voted for a candidate whom you knew some members of the Communist Party also happened to support, for example — the court struck Florida’s loyalty oath under the 14th Amendment’s due process clause.

Since Cramp, courts have distinguished three inter-related harms associated with vague laws, all of which are embodied in HB 1557.

First, they’ve said vague laws deny citizens adequate notice of what conduct will and will not make them vulnerable to legal sanctions. HB 1557’s extraordinary vagueness denies to members of the educational community the “reasonable opportunity to know what is prohibited” that due process requires.

Second, vague laws invite arbitrary and discriminatory application. For example, interpreted literally, HB 1557 could be read to prohibit a heterosexual teacher from mentioning her opposite-sex spouse; after all, doesn’t that “instruct” students “on sexual orientation” — namely the teacher’s heterosexuality or the fact of heterosexuality more generally? Yet we can assume straight teachers are less likely to be caught in the crosshairs of HB 1557 than their LGBTQ colleagues.

Third, when vague laws regulate expressive conduct, they have a chilling effect on First Amendment free speech rights. Unsure of what is and isn’t prohibited, teachers and “third parties” alike will “steer far wider of the unlawful zone . . . than if the boundaries of the forbidden areas were clearly marked.”

The chilling effect HB 1557 could underscore the core harm it poses: the burden on the free speech rights of LGBTQ teachers and students. Over the years, courts have consistently recognized that LGBTQ students and teachers have a basic First Amendment right to express who they are without being subjected to legal sanctions.

Taken as a whole, these cases articulate a clear constitutional principle: School boards and state legislatures may not abuse their general latitude concerning campus speech to keep teachers and students in the closet. However, the extraordinary vagueness of HB 1557 threatens to do just that. To that extent, HB 1557 burdens the First Amendment rights of Florida teachers and students who happen to be LGBTQ.

Nor is this a technicality. On the contrary, it is essential to remember the human stakes of HB 1557. LGBTQ youth continue to suffer from disproportionately high rates of suicidal ideation, with 42 percent of all LGBTQ youth and over half of transgender and nonbinary youth seriously considering suicide in the past year. That statistic should shock the conscience.

The good news is that LGBTQ students who are taught about LGBTQ issues or people in school are substantially less likely to attempt suicide, according to The Trevor Project, a suicide prevention organization for LGBTQ youth. The bad news is that HB 1557 would effectively bar schools from offering these life-affirming lessons. The unavoidable conclusion is as stark as it is simple: If “Don’t Say Gay” remains the law of the land in Florida, some children may die who otherwise would have lived.

Daniel Putnam is a Furman Scholar at New York University School of Law. Before attending law school, he was a lecturer in philosophy at Dartmouth and a postdoctoral research associate in values and public policy at Princeton.