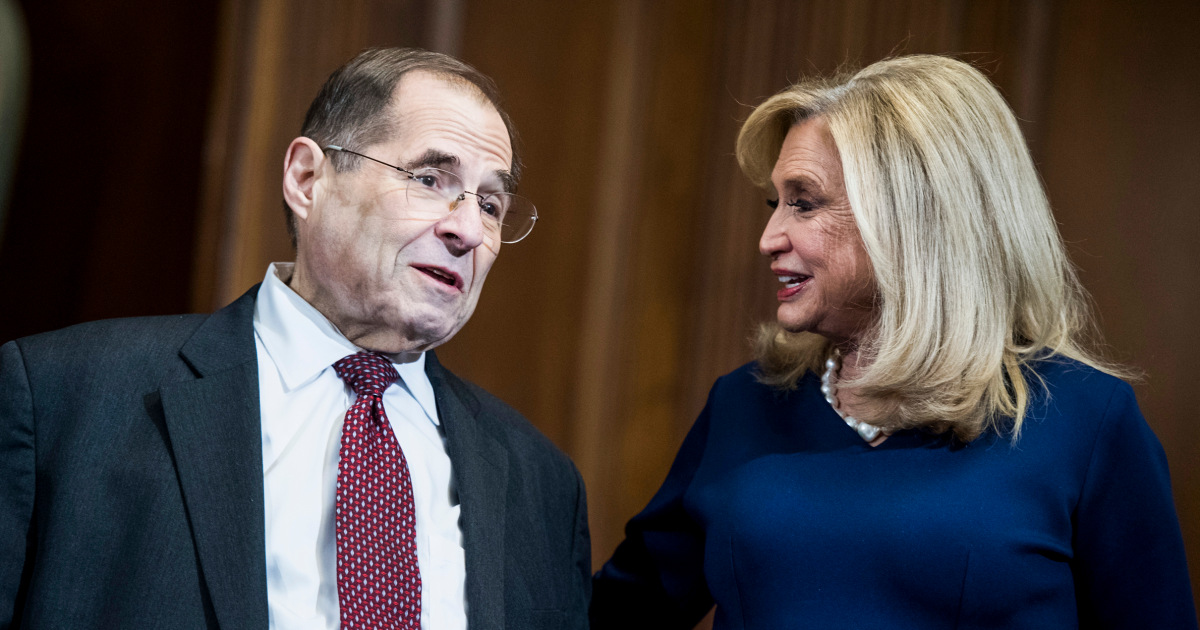 WASHINGTON — In a blow to Democrats, a New York judge has approved new district lines, setting up at least two awkward Democratic primaries and pitting longtime party incumbents against each other in a heavyweight matchup.The congressional map, drawn by a court-appointed expert, pulls together the districts of longtime Democratic Reps. Jerry Nadler, who represents…

WASHINGTON — In a blow to Democrats, a New York judge has approved new district lines, setting up at least two awkward Democratic primaries and pitting longtime party incumbents against each other in a heavyweight matchup.

The congressional map, drawn by a court-appointed expert, pulls together the districts of longtime Democratic Reps. Jerry Nadler, who represents Manhattan’s Upper West Side, and Carolyn Maloney, who represents the Upper East Side.

Maloney and Nadler were both elected in 1992 and have served together in their neighboring districts for 30 years as they rose through the ranks to become powerful committee chairs.

Nadler, who leads the Judiciary Committee, played a key role in both of former President Donald Trump’s impeachment proceedings. Maloney chairs the House Oversight Committee, which has investigated abuse of government funds to combat the Covid pandemic.

Both now say they will now run for the new 12th District, setting up a clash in the Aug. 23 primary.

“I look forward to running in the new NY-12 — which includes my long-time residence and many communities I have represented throughout my entire career in public service,” Nadler said in a statement. “This new district belongs to no individual candidate, but instead to the voters who call it home.”

In her statement, Maloney said she is “not scared of a fight,” noting that most of the new district overlaps with her old one.

“Regardless of who’s jumping into the race with our new maps, I know I’m the right leader for the people of New York’s 12th district,” she said. “Too often qualified and accomplished women have been told to stand aside for the sake of men’s egos. But I have a lifetime of experience standing up to powerful men.”

Member-on-member primaries, as they are known, sometimes occur after redistricting when two lawmakers’ districts are combined, but they are rare, especially between two members of Congress with such seniority.

Meanwhile, de Blasio, who left office less than six months ago, announced Friday that he is running for Congress in the newly created 10th District, which covers Lower Manhattan and much of Brooklyn, including de Blasio’s neighborhood, Park Slope.

He is expected to face a number of other candidates — including Jones, who said Saturday he would run there — in a district that has become an epicenter of American liberalism.

The new map put Jones, who represents the 17th District in Westchester, in an especially difficult position.

First, his district was carved up. Then, Rep. Sean Patrick Maloney rankled many in the party by announcing he would run in a new district included in Jones’ current district.

That forced Jones to decide between running against Maloney, who oversees the party’s House campaign apparatus, or Rep. Jamaal Bowman, another Black freshman progressive who is an ally of Jones’.

Jones railed against the new map in a statement announcing the move, saying it was “designed to reduce the number of Democrats serving New Yorkers in Congress.” But he said he is excited to run in a district that includes “the birthplace of the LGBTQ+ rights movement,” noting that it was home to the nexus of the Stonewall Uprising.

Jones was not alone in crying foul about the new map, the product of a particularly messy redistricting process. Other New York Democrats also expressed outrage.

Rep. Hakeem Jeffries, the chair of the House Democratic Caucus, who represents parts of Brooklyn, said it was a “constitutional travesty” in a statement.

The map was “prepared by an unelected, out-of-town special master and rubber-stamped in the dead of the night by a partisan Republican judge in Steuben County,” Jeffries said. “The fix was in from the beginning.”

It was initially supposed to be drawn by a bipartisan commission, but when that effort failed, the Democratic-controlled Legislature stepped in and drew its own map.

Last month, New York’s top court invalidated that map and sent it back to a lower court, which appointed an outside expert known as a special master to draw up a new one.

Bowman and Jones complained that the new maps split Black and Hispanic districts in ways that would reduce their representation in Congress, while Nadler complained that the map arbitrarily switched to divide Manhattan north to south instead of east to west, the way it had been for decades.

The new map would also make the coming election more favorable to Republicans. In his ruling, the judge, Patrick McAllister, said it aims to create 15 Democratic districts, three Republican ones and eight competitive ones, calling it “almost perfectly neutral.”

Sean Patrick Maloney suggested there could be further legal action, meaning the saga of New York’s maps may not be over quite yet.

“Unfortunately, this final map flouts the clear commands of the New York constitution and causes real concern under the Voting Rights Act,” he said in a statement. “In the coming weeks and months we will continue fighting to get fair maps that reflect the will of the voters of New York.”