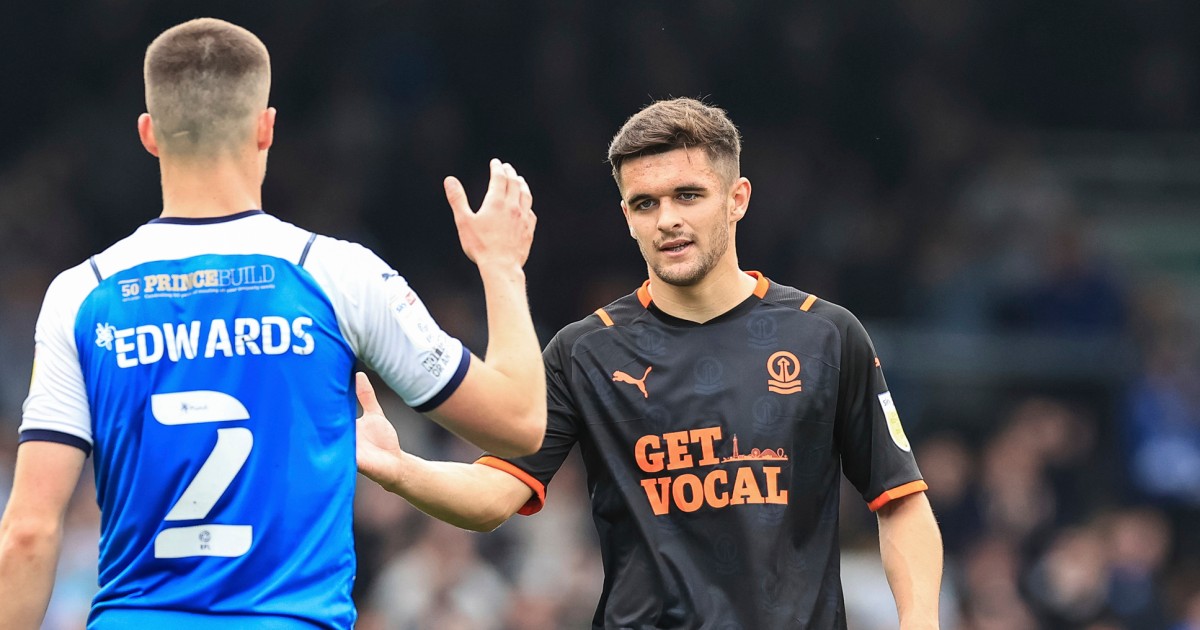 LONDON — English soccer player Jake Daniels said he is gay on Monday in a trailblazing moment for the European men’s game.The 17-year-old forward made the announcement at the end of his first season as a professional player with second division club Blackpool.“This season has been a fantastic one for me on the pitch,” he…

LONDON — English soccer player Jake Daniels said he is gay on Monday in a trailblazing moment for the European men’s game.

The 17-year-old forward made the announcement at the end of his first season as a professional player with second division club Blackpool.

“This season has been a fantastic one for me on the pitch,” he said in a statement. “But off the pitch I’ve been hiding the real me and who I really am. I’ve known my whole life that I’m gay, and I now feel that I’m ready to come out and be myself.

“It’s a step into the unknown being one of the first footballers in this country to reveal my sexuality.”

Daniels said he was inspired by Josh Cavallo of Australian team Adelaide United, who is the only openly gay man currently playing in a top division in world soccer following the 22-year-old midfielder’s announcement in October.

“I’ve hated lying my whole life and feeling the need to change to fit in,” Daniels said. “I want to be a role model myself by doing this. There are people out there in the same space as me that may not feel comfortable revealing their sexuality.

“I just want to tell them that you don’t have to change who you are, or how you should be, just to fit in. You being you, and being happy, is what matters most.”

Daniels said teammates at Blackpool embraced his sexuality after confiding in them. The northwest English club said it was “incredibly proud that he has reached a stage where he is empowered to express himself both on and off the pitch.”

The English Football Association said Daniels was an “inspiration” to the sport.

“This is a hugely positive step as we strive to build an inclusive game that we can all be proud of,” the governing body tweeted. “We are with you and we hope your story will help to give people across the game the strength and encouragement to be their true self.”

The only openly gay man to have played in English soccer’s professional leagues was Justin Fashanu, who was not active at a high level when he made the announcement in 1990. The former Nottingham Forest and Norwich City striker was found hanged in a London garage at age 37. The Justin Fashanu Foundation calls him the “world’s first openly gay professional footballer.”

Soccer in England is still dealing with trying to eradicate homophobic chants at some games.

“If, by me coming out, other people look at me and feel maybe they can do it as well, that would be brilliant,” Daniels told broadcaster Sky Sports. “If they think this kid is brave enough do this, I will be able to do it too. I hate knowing people are in the same situation I was in.

“I think if a Premier League footballer does come out that would just be amazing. I feel like I would have done my job and inspired someone else to do that. I just want it to go up from here. We shouldn’t be where we are right now.”

It is a rarity in team sports for men to announce they are gay.

Former Wales captain Gareth Thomas was the first active rugby professional to come out in 2009, two years before he retired, and has become a source of inspiration across sports.

The first active NFL player to come out as gay was Carl Nassib in 2021 while he was at the Las Vegas Raiders. The defensive end was released by the team in March.

The first openly gay player in the NBA was Jason Collins while playing for the Brooklyn Nets in 2021.

One of the most prominent gay athletes in Britain is Olympic diving champion Tom Daley who inspired former England soccer captain Casey Stoney to come out in 2014. She is coach of the San Diego Wave after managing the women’s team at Manchester United.

“Must of took a lot of guts & courage,” Stoney tweeted to Jake Daniels. “Good for you for stepping out of the mould & for being authentically you! Wouldn’t it be great if we got to a place where we didn’t have to use the words ‘guts & courage’ to describe someone being comfortable being themselves.”