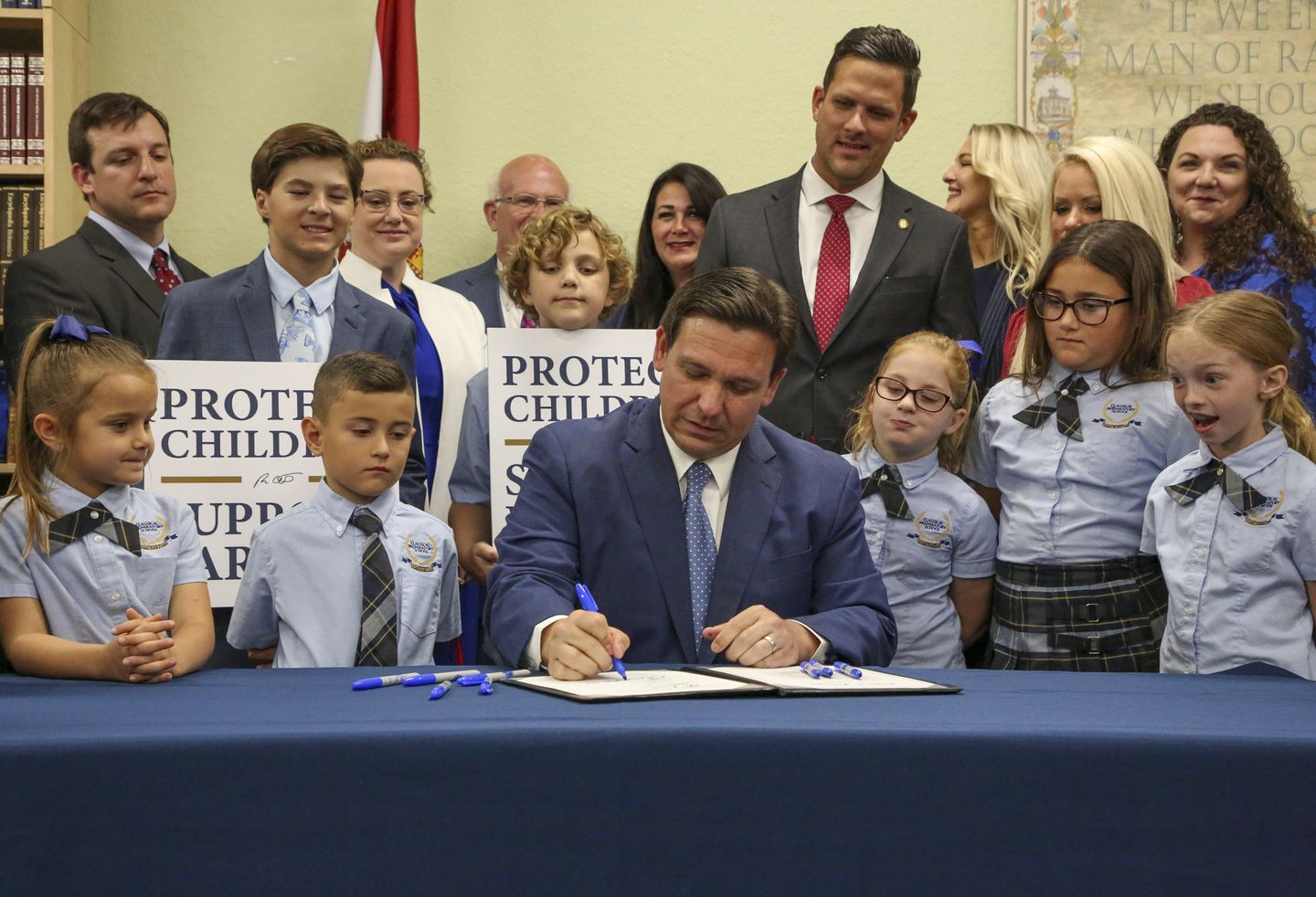 TALLAHASSEE, Fla. — Florida Gov. Ron DeSantis signed a bill on Monday that forbids instruction on sexual orientation and gender identity in kindergarten through third grade, a policy that has drawn intense national scrutiny from critics who argue it marginalizes LGBTQ people. The legislation has pushed Florida and DeSantis, an ascending Republican and potential 2024…

TALLAHASSEE, Fla. — Florida Gov. Ron DeSantis signed a bill on Monday that forbids instruction on sexual orientation and gender identity in kindergarten through third grade, a policy that has drawn intense national scrutiny from critics who argue it marginalizes LGBTQ people.

The legislation has pushed Florida and DeSantis, an ascending Republican and potential 2024 presidential candidate, to the forefront of the country’s culture wars, with LGBTQ advocates, students, Democrats, the entertainment industry and the White House denouncing what critics have called the “Don’t Say Gay” bill.

DeSantis and other Republicans have repeatedly said the measure is reasonable and that parents, not teachers, should be broaching subjects of sexual orientation and gender identity with their children.

“We will make sure that parents can send their kids to school to get an education, not an indoctrination,” DeSantis said to applause before he signed the bill into law.

The bill states: “Classroom instruction by school personnel or third parties on sexual orientation or gender identity may not occur in kindergarten through grade 3 or in a manner that is not age appropriate or developmentally appropriate for students in accordance with state standards.” Parents would be able to sue districts over violations.

DeSantis signed the bill after a news conference held at the Classical Preparatory School in Spring Hill, about 46 miles north of Tampa. The school was founded by Anne Corcoran, wife of Education Commissioner Richard Corcoran, according to The Gainesville Sun.

Public backlash began almost immediately after the bill was introduced, with early criticism lobbed by Chasten Buttigieg, the husband of U.S. Transportation Secretary Pete Buttigieg, and condemnation from LGBTQ advocacy groups. Democratic President Joe Biden called it “hateful.” As the bill moved through the legislature, celebrities mobilized against it on social media, and criticized it at this year’s Academy Awards.

Florida students staged walkouts and packed into committee rooms and statehouse halls to protest the measure, often with booming chants of “We say gay!” The Walt Disney Company, a powerful player in Florida politics, suspended its political donations in the state, and its theme park workers staged walkouts over what they considered to be a slow response against the bill from CEO Bob Chapek.

Throughout debate in the GOP-controlled statehouse, Democrats have said the bill’s language, particularly the phrases “classroom instruction” and “age appropriate,” could be interpreted so broadly that discussion in any grade could trigger lawsuits and create a classroom atmosphere where teachers would avoid the subjects entirely.

“The bill’s intentionally vague language leaves teachers afraid to talk to their students and opens up school districts to costly and frivolous litigation from those seeking to exclude LGBTQ people from any grade level,” said state Rep. Carlos G. Smith, a Democrat who is gay. “Even worse, #DontSayGay sends a hateful message to our most vulnerable youth who simply need our support.”

Andrew Spar, president of the Florida Education Association, said the bill amounts to a political wedge issue for Republicans because elementary schools, especially in kindergarten through third grade, do not teach about these subjects and have state curriculum standards guiding classroom lessons.

“This bill is based on a falsehood, and that falsehood is that somehow we’re teaching kids inappropriate topics at an early age, and clearly we’re not,” Spar said.

The bill’s sponsor, Republican Rep. Joe Harding, has said it would not bar spontaneous discussions about sexual orientation or gender identity in schools but would prevent districts from integrating the subjects into official curriculum. During the bill’s early stages, Harding sought to require schools to inform parents if a student came out as LGBTQ to a teacher. He withdrew the amendment after it picked up attention online.

“Nothing in the amendment was about outing a student. Rather than battle misinformation related to the amendment, I decided to focus on the primary bill that empowers parents to be engaged in their children’s lives,” he said in a statement.

At the bill signing ceremony Monday, several young children accompanied DeSantis and other politicians near the podium, with some holding signs bearing the governor’s “Protect Children/Support Parents” slogan. DeSantis gave the children the pens he used to sign the bill.

The White House, which has sparred with the DeSantis administration over a range of policies, has issued statements against the bill.

For teachers in Florida, the bill has caused some confusion over what is allowed in the classroom as well as concerns over frivolous lawsuits, said Michael Woods, a special education teacher in Palm Beach County with about three decades of experience.

“From the start, I thought it was a solution in search of a problem, and the sad part about it is, I think it’s going to have a chilling effect on making sure that young people, students have a safe learning environment,” he said.