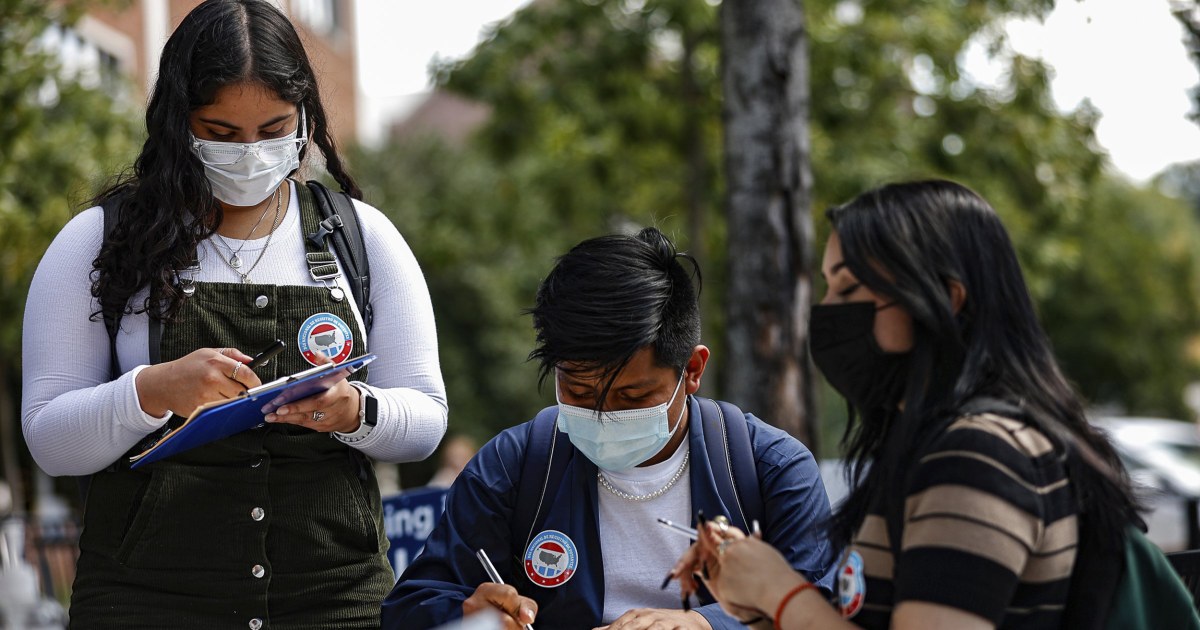 WASHINGTON — As we begin heading into the 2022 midterms, Democrats have another challenge on their hands: They’re getting out-registered in several key battlegrounds — though not all of them.On Tuesday, The Hill noted that Democrats’ voter registration advantage over Republicans has declined in Florida (from more than 200,000 voters in 2019 to 23,000 now),…

WASHINGTON — As we begin heading into the 2022 midterms, Democrats have another challenge on their hands: They’re getting out-registered in several key battlegrounds — though not all of them.

The good news for Democrats: Their voter registration situation has improved in Arizona and New Hampshire over the last two years. They still have the advantage in key states.

The bad news is that it’s getting worse in Florida, North Carolina, and Pennsylvania as well as Nevada.

(FYI. Georgia, Michigan, and Wisconsin are not included because they don’t report party affiliation. )

Whether it was due to Covid, the Trump campaign’s voter drive in 2019-2020, or ancestral Democrats who have either switched parties or passed away, Democrats have a voter registration problem they need to fix as we approach 2022 and 2024.

Take it to the limit

Today, the Democratic-controlled Senate is set to hold a procedural vote on raising the debt limit, per NBC’s Capitol Hill team.

And that motion — which needs 60 votes to proceed, and thus at least 10 GOP votes — appears destined to fail.

So what do Democrats do next?

One idea that’s attracted attention over the last 24 hours is for Democrats to create a one-time legislative exception to the filibuster, NBC’s Leigh Ann Caldwell, Sahil Kapur, Julie Tsirkin and Rebecca Shabad report. Four sources who were privy to the discussions told NBC News that Senate Democrats are now supporting a new exception from the filibuster. All asked to speak anonymously to detail closed-door discussions.”

The one problem with this: Sen. Joe Manchin, D-W.V., isn’t on board, Politico writes.

Biden’s agenda is more popular than he is

A national Quinnipiac poll released yesterday showed 62 percent of voters saying they support the $1 trillion bipartisan infrastructure legislation, and 57 percent supporting the $3.5 trillion effort on social programs like child care, education and Medicare. But, the same poll found that Democrats were 3 points behind Republicans on the generic ballot.

Data Download: The numbers you need to know today

2. 63 million: The number of raw votes Democrats lost in midsize and small counties across 10 states around the Midwest between the 2012 and 2020 elections, according to a new report obtained by the New York Times.

3: The number of hours between when a Southern California oil pipeline operator was warned of a possible spill and when the operator actually shut down the pipeline that ultimately leaked 144,000 of oil into the ocean, according to regulators.

43,977,775: The number of confirmed cases of the coronavirus in the United States, per the most recent data from NBC News and health officials. (That’s 96,538 more since yesterday morning. )

710,049: The number of deaths in the United States from the virus so far, per the most recent data from NBC News. (That’s 2,049 more since yesterday morning. )

56 percent: The share of all Americans who are fully vaccinated, per the CDC.

67.4 percent: The share of all U.S. adults at least 18 years of age who are fully vaccinated, per CDC.

ICYMI: What else is happening in the world

Here are five ways the debt-ceiling impasse could end.

Politico reports that Virginia Republican gubernatorial nominee Glenn Youngkin is still calling for an audit of state voting machines even though he said last week he thought the 2020 election results were “certifiably fair.”

Missouri executed an Intellectually disabled man who was convicted of murdering three people, despite pleas from Pope Francis.

The Biden administration is easing the path for public servants to have their student loans forgiven.

Chuck Todd is moderator of “Meet The Press” and NBC News’ political director.

Mark Murray is a senior political editor at NBC News.

Ben Kamisar is a political writer for NBC News.

Alec Rich is an intern in NBC’s Political Unit