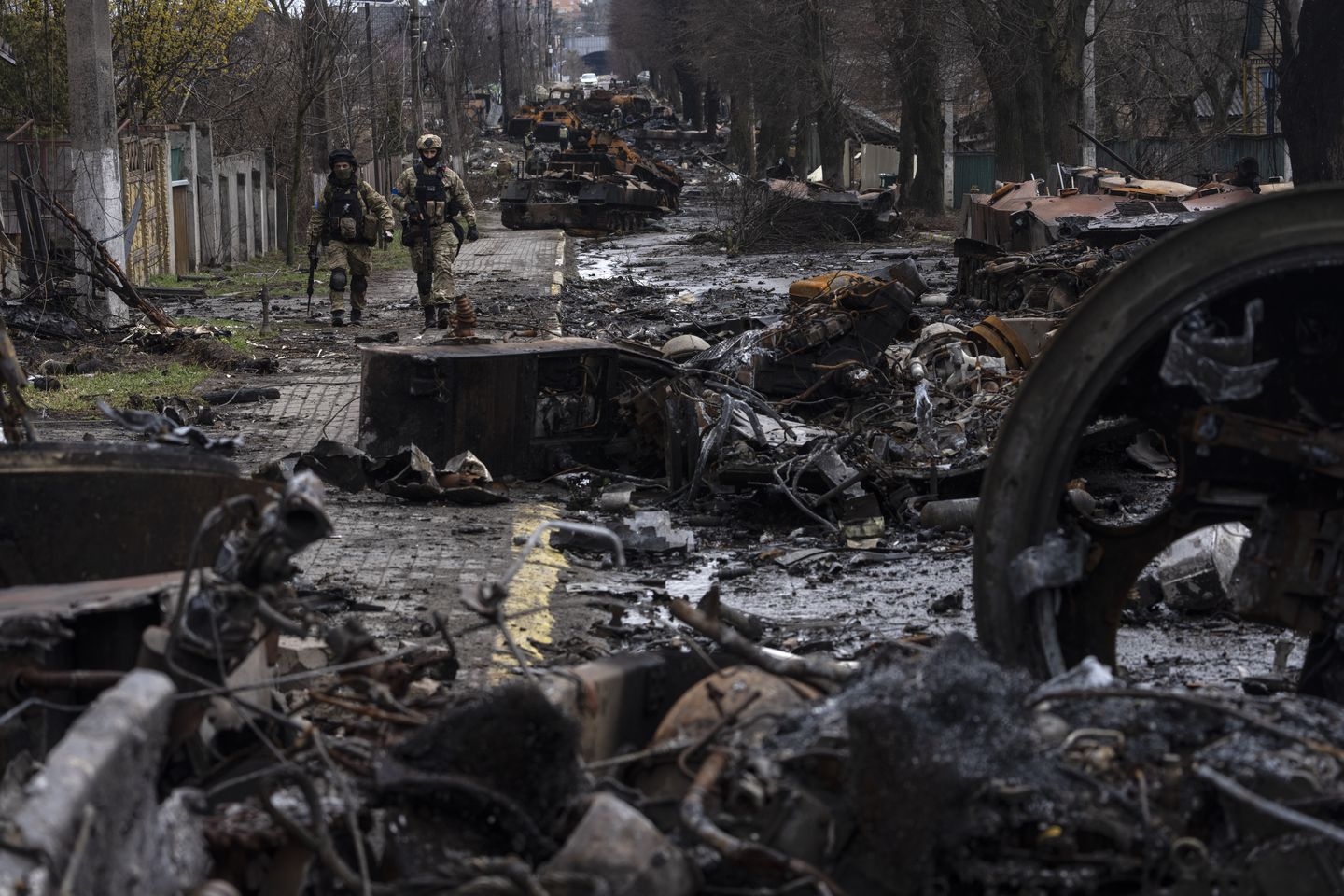 Demands from world leaders that Russia be held accountable for atrocities and human rights abuses that its military carried out in Ukraine mounted Sunday, as photos of dozens of dead civilians and a mass grave on the outskirts of Kyiv circled the globe. Ukrainian President Volodymyr Zelenskyy accused Moscow of carrying out a genocide, claiming…

Demands from world leaders that Russia be held accountable for atrocities and human rights abuses that its military carried out in Ukraine mounted Sunday, as photos of dozens of dead civilians and a mass grave on the outskirts of Kyiv circled the globe.

Ukrainian President Volodymyr Zelenskyy accused Moscow of carrying out a genocide, claiming that the Russian government has committed gross abuses including the torture and murder of children. Officials said more than 400 civilian corpses have been collected from areas near Kyiv, which Russian forces recently withdrew from.

“When we find people with hands tied behind their back and decapitated, such things I don’t understand — I don’t comprehend the kids who are killed and tortured,” Mr. Zelenskyy said during an appearance Sunday on “Face the Nation.”

“It’s important for the free people of the United States to have a look at it and understand, and see for themselves,” he told the CBS show, before later adding: “This is genocide.”

The comments came after Ukrainian troops reported finding brutalized bodies with bound hands, gunshot wounds to the head and signs of torture in the town of Bucha, after Russian troops had withdrawn from the town on the outskirts of Kyiv.

The government of Russian President Vladimir Putin sharply denied the Ukrainian accusations, with the defense ministry in Moscow claiming that “not a single civilian faced any violent action by the Russian military,” and that photos and videos of dead bodies in Bucha were “stage-managed by the Kyiv regime for Western media.”

The Biden administration, which had previously referred to Mr. Putin as a war criminal, vowed Sunday along with leaders from across Europe to hold Moscow accountable for any atrocities that have occurred since the Russian invasion began nearly six weeks ago.

Germany said the West will soon impose more sanctions on Russia in response to the war crimes reports.

“Putin and his supporters will feel the consequences,” German Chancellor Olaf Scholz said in a statement.

Estonian Prime Minister Kaja Kallas tweeted about the images emerging from Bucha and said “this is not a battlefield, it’s a crime scene.”

“Photos of murdered civilians in Irpin and Bucha by Russian troops recall the mass killings by Soviet and Nazi regimes,” she wrote in one of several tweets, all in English.

NATO Secretary-General Jens Stoltenberg called the killing of civilians in the town horrific, saying on CNN that “it is a brutality against civilians we haven’t seen in Europe for decades.”

Ukrainian Deputy Prime Minister Iryna Venediktova said the bodies of 410 civilians have been removed from Kyiv-area towns following the departure of Russian troops in recent days.

She said that Russian forces killed the mayor of Motyzhyn, a village in the Kyiv region, while he was being held. She also said that 11 other local mayors and community leaders remain in Russian captivity across Ukraine.

Associated Press journalists in Bucha saw the bodies of at least nine people in civilian clothes who appeared to have been killed at close range. At least two had their hands tied behind their backs. The AP also saw two bodies wrapped in plastic, bound with tape and thrown into a ditch.

Authorities said they were documenting evidence of alleged atrocities to add to their case for prosecuting Russian officials for war crimes.

To convict, International Criminal Court prosecutors will need to show a pattern of indiscriminate deadly assaults on civilians during Russia’s invasion.

AP journalists also reported seeing Ukrainian soldiers gingerly removing at least six bodies from a street in Bucha with cables in case the Russians had booby-trapped corpses with explosives before their withdrawal.

Residents said the dead were civilians who were killed without provocation.

During his appearance on CBS, Mr. Zelenskyy used the term genocide to describe Russia’s actions in Ukraine broadly.

“Indeed, this is genocide,” he said. “The elimination of the whole nation and the people. We are the citizens of Ukraine. We have more than 100 nationalities. This is about the destruction and extermination of all these nationalities. We are the citizens of Ukraine and we don’t want to be subdued to the policy of [the] Russian Federation. This is the reason we are being destroyed and exterminated, and this is happening in the Europe of the 21st century. So this is the torture of the whole nation.”

When asked Sunday whether the latest developments in Ukraine constitute a genocide, U.S. Secretary of State Antony Blinken said American officials are closely monitoring the situation.

“We will look hard and document everything that we see, put it all together, make sure that the relevant institutions and organizations that are looking at this — including the State Department — have everything they need to assess exactly what took place in Ukraine, who’s responsible, and what it amounts to,” Mr. Blinken said during an appearance on CNN.

With regard to the images of civilian bodies in Bucha, Mr. Blinken said: “You can’t help but see these images as a punch to the gut … We’ve said before of Russia’s aggression that we thought it was likely that they would commit atrocities.”

“There needs to be accountability for it,” the secretary of state said. “But I think the most important thing is — we can’t become numb to this. We can’t normalize this.”

Following talks last week between Russian and Ukrainian delegations in Turkey, the Russian side said it would withdraw forces from areas near Kyiv.

The announcement was viewed with caution, as well as hope that it may be a sign that Moscow is preparing to end the invasion that has left thousands dead and displaced nearly 4 million Ukrainians.

The Russian military subsequently appeared to ramp up strikes on civilian areas near Kyiv, as it pulled back from those areas. Russian forces have faced far more intense resistance from the Ukrainian military than it expected near Kyiv and Moscow has recently said it is refocusing on targets in Ukraine‘s east.

Ukraine‘s top military intelligence official has predicted that Mr. Putin will aim to split Ukrainian territory into two, in the same way North and South Korea have been divided since the Korean War was frozen by an armistice nearly 70 years ago.

With Russia’s military failing to capture Kyiv or other major cities, Mr. Putin is recalibrating his focus because he “is definitely not able to swallow the entire country,” Ukrainian Gen. Kyrylo Budanov said last week.

“There are reasons to believe that he may try to impose a separation line between the occupied and unoccupied regions of our country,” said Gen. Budanov, who predicted Russia will attempt to consolidate gains in eastern Ukraine, which Moscow-backed separatists have held since Russia also annexed the Crimean Peninsula from Ukraine in 2014.

Moscow has said it is now directing Russian troops to the Donbas region situated to the northeast of Crimea.

During his appearance Sunday on CBS, Mr. Zelenskyy said he believes Mr. Putin is focused on a corridor of territory running along the Sea of Azov in eastern Ukraine.

“This is where they are trying to focus in terms of armament, in terms of deploying their personnel,” the Ukrainian president said.

In that region, Mariupol, a port on the Sea of Azov that has seen some of the war’s greatest suffering, remained cut off Sunday. About 100,000 civilians are believed to be trapped there with little or no food, water, fuel and medicine.

The International Committee of the Red Cross said Sunday that a team sent Saturday to help evacuate residents had yet to reach the city.

There were also indications that Russian forces were continuing to shell other areas in Ukraine‘s north on Sunday, as well as areas west of the Crimean Peninsula.

The Russian military said Sunday that it had struck an oil-processing plant and fuel depots around the strategic Black Sea port city of Odesa.

• This article is based in part on wire service reports.