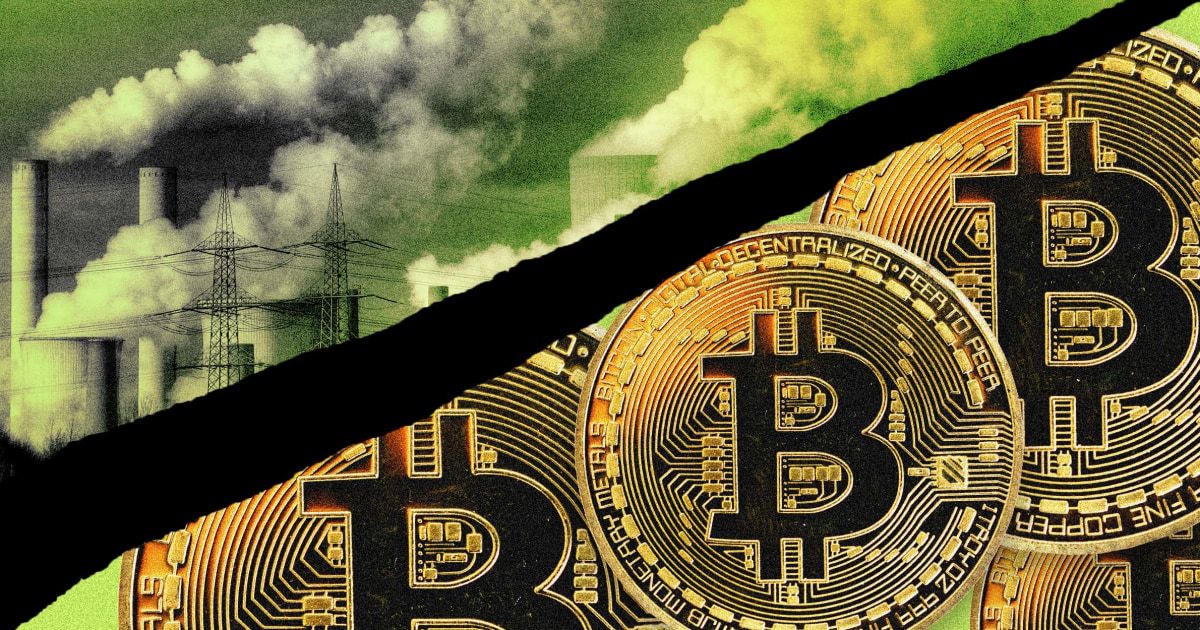 Four years ago, the Scrubgrass power plant in Venango County, Pennsylvania, was on the brink of financial ruin as energy customers preferred to buy cheap natural gas or renewables. Then Scrubgrass pivoted to Bitcoin.Today, through a holding company based in Kennerdell, Pennsylvania, called Stronghold Digital Mining that bought the plant, Scrubgrass burns enough coal waste…

Four years ago, Scrubgrass, a power plant in Venango County in Pennsylvania, was at the brink of financial collapse as customers chose to purchase cheap natural gas and renewables. Scrubgrass switched to Bitcoin.

Today, through a holding company based in Kennerdell, Pennsylvania, called Stronghold Digital Mining that bought the plant, Scrubgrass burns enough coal waste to power about 1,800 cryptocurrency mining computers. The company filed documents with the U.S. Securities and Exchange Commission stating that these computers are known as miners and are stored in shipping containers near the power plant. The coal waste, which is a result of decades of mining in the area, has been left behind in huge black piles. Stronghold estimated that it’s currently burning about 600,000 tons of it per year at Scrubgrass.

According to the SEC filings, Stronghold plans to operate 57,000 miners by the end of 2022 — an expansion that requires buying up two additional coal waste power plants in the region. What happened at Scrubgrass is a sign of a growing trend in the crypto world, which alarms many environmentalists. The rise of Bitcoin mining is bringing new life to America’s old fossil fuel power plants. This is a trend that environmentalists believe discourages investment in renewable energy sources.

Bitcoin, like other cryptocurrencies, uses blockchain technology. It is essentially a shared database that stores transactions. All entries must be verified and encrypted. The network is protected by “miners”, who use powerful computers to play a huge guessing game that eventually verifies transactions. If a computer “wins” the game, it’s rewarded with a newly created bitcoin, currently worth about $40,000. This process uses a lot electricity and generates heat which requires industrial cooling systems that use even more energy.

The Bitcoin network consumes more electricity than other small countries like the Philippines according to the Cambridge Bitcoin Electricity Consumption Index ..

“Bitcoin Mining is essentially waste-by-design,” stated Alex de Vries, a Dutch economist and researcher, who founded Digiconomist, which tracks the environmental impacts of cryptocurrency mining. It’s a system in which participants are forced to use resources to ensure security. The more value bitcoin has, the more money it’s worth, the more we spend on resources.”

The trend has accelerated in recent months after the Chinese government cracked down on bitcoin mining, which until May was home to about two-thirds of global bitcoin mining capacity, according to research firm Rystad Energy. China announced that all cryptocurrency transaction were illegal ,, which was another blow to the sector. The crackdown on mining has already resulted in a surge of bitcoin mining operations entering the United States. Several states including Texas and Kentucky welcomed them with open arms and offered low electricity and tax incentives.

“These miners don’t just need cheap energy, but a stable source of power because their machines need to run 24/7, and fossil fuel sources are best suited for it,” de Vries said. “Miners are reviving gas plants and idle coal mines in places like New York and Montana.”

Stronghold officials declined to comment because the company is currently in an SEC-mandated quiet period ahead of its initial public offering. But in a recent filing, it described its operations as “environmentally-beneficial,” pointing to Pennsylvania’s classification of waste coal power generation as a “Tier II alternative energy source.” This classification allows Stronghold to benefit from state subsidies.

Waste piles can be an environmental hazard. They contain contaminants that leach into the waterways and kill fish. It can be burned as fuel in power plants like Scrubgrass to clean up waste coal piles. However, it also emits harmful greenhouse gases .

“Simply put, we employ 21st century crypto mining techniques to remediate the impacts of 19th and 20th century coal mining in some of the most environmentally neglected regions of the United States,” the company stated in the filing.

According to public filings, Stronghold works closely with the Pennsylvania Department of Environmental Protection to prioritize higher-risk coal waste piles, including those already burning or contaminating waterways, to burn as fuel for its power plants, removing harmful particulates that would be released into the atmosphere from piles that ignite spontaneously. Rob Altenburg, PennFuture’s senior director for energy and climate, stated that he thinks the state is not taking the right approach in handling large piles of coal waste. He also believes that burning it in power plants makes the problem more invisible. When it burns, people don’t see huge towers of black smoke.” he stated. “And when people don’t see pollution, they don’t think it’s there.”

Jamar Thrasher, a spokesperson for the Pennsylvania Department of Environmental Protection said that the waste piles “continue to pollute our land, streams and air even while they sit there” and that “currently one of the most effective ways to remediate these piles is to consume them using the best available technology present at these plants like Scrubgrass to create electricity.” He added that “unfortunately, like other forms of electric generation using coal, natural gas and oil, this does result in emission of air pollutants which must be balanced against the environmental benefits provided by this form of generation.”

Altenburg and other air quality advocates prefer alternative approaches to remediation, including planting sea grass on top of waste piles to secure the surface and mitigate leaching problems or moving the waste coal into a lined landfill that prevents any leaching into waterways — a move the coal refuse lobby ARIPPA estimated would cost about $30 per ton.

Altenburg said he believes if the state diverted generous subsidies being given to the coal waste plants and considered the social cost of carbon emissions, it could also pay for remediation. However, this would not be popular politically.

” It’s easier for our Legislature than to pass a bill that funds environmental cleanup.

This year, the Pennsylvania Environmental Council recommended that the state’s alternative energy standards, which currently permit subsidies to waste coal plants, be reformed to phase out fossil fuel energy sources like waste coal plants unless they use carbon capture technology.

Since China kicked bitcoin miners out in the spring, the proportion of bitcoin being mined using renewable energy sources has fallen as miners have migrated to countries with more fossil fuel-reliant energy grids, said Pete Howson, bitcoin expert and senior lecturer in international development at Northumbria University in the United Kingdom. Many miners have turned to China’s neighbours, such as Kazakhstan and Abkhazia. Both countries are part of Georgia and their energy grids are almost entirely powered by fossil fuels.

” A lot ended up in North America due to the availability of cheap power and because they could make deals with fossil fuel companies,” stated David Gerard, a cryptocurrency expert.

Before the crackdown, the majority of bitcoin mining was done in China by Poolin, which used mainly fossil fuels in Inner Mongolia, and hydroelectric power from Sichuan.

” The cost of electricity is a key factor in mining. It’s extremely cheap in Texas. He said that there is a lot oil in Texas, along with wind power and solar. “There’s also a friendly political environment for bitcoin mining.”

In June, Texas Gov. Greg Abbott tweeted that he was excited about Texas becoming the next “crypto leader” with cryptocurrency kiosks being introduced in grocery stores.

Cryptocurrency advocates in Houston host a monthly Bitcoin meetup, which in August saw about 200 representatives from oil and gas companies and bitcoin mining companies gather to discuss energy trading,CNBC reported.

De La Torre was present at the meetup and said Poolin is drawn to natural gas, which is a byproduct from the oil industry that is being burned off in flares.

” The narrative is that Bitcoin mining is destroying Earth,” he stated. We can make a machine that captures the flared gas and then runs it through a generator to create electricity. It takes the pollutant away from the atmosphere to create power used for mining.”

While Poolin has moved its headquarters from Hong Kong to Austin, Texas, its employees have been flying across the other states to see whether they can find cheap energy deals or incentives for setting up operations. He said

“Kentucky offers very attractive incentives.” “This is where all the coal power stations were located, many of which have been shut down. This means that there is a lot more electrical infrastructure than it’s being used .”

In late March, Kentucky Gov. Andy Beshear signed a pair of bills offering tax breaks to cryptocurrency miners who set up shop in the state.

This type of alignment is happening all across the United States.

A former coal power station on the shores at Seneca Lake was converted to natural gas by New York’s Greenidge Generation. It has since started bitcoin mining. Greenidge Generation, the company behind the power plant, on its website described its mining operation as “more than twice as efficient” as the global standard and “100% carbon neutral” through offsets. Local residents claim that the power station is heating the lake , and polluting the atmosphere, as reported previously by NBC News. A full thermal study won’t be produced until 2023.

The CEO of Greenidge told NBC News in July that the lakeshore facility was operating within its federal and state environmental permits and had created 31 jobs. Crusoe Energy System, a Colorado-based startup, uses natural gas as a fuel for electricity generation. It is located in Montana near North Dakota. Crusoe purchased the gas from Kraken Oil & Gas. Without it, the oil field owner would have burned off the gas in flares and released CO2 and other pollutants. Proponents claim that selling the gas to crypto miners is a win for both miners and energy companies. While the process still produces CO2, it also creates value.

De Vries views the process — which is being replicated around the world, including by Gazprom in Siberia — differently.

“It can make a fossil fuel-extracted byproduct more profitable, which could increase its longevity and allow it to run longer,” he stated.

“Instead of building renewable infrastructure to power clean energy,” he said, “bitcoin mining is creating an incentive for fossil fuel power plants to become more profitable and continue doing what they are doing.”