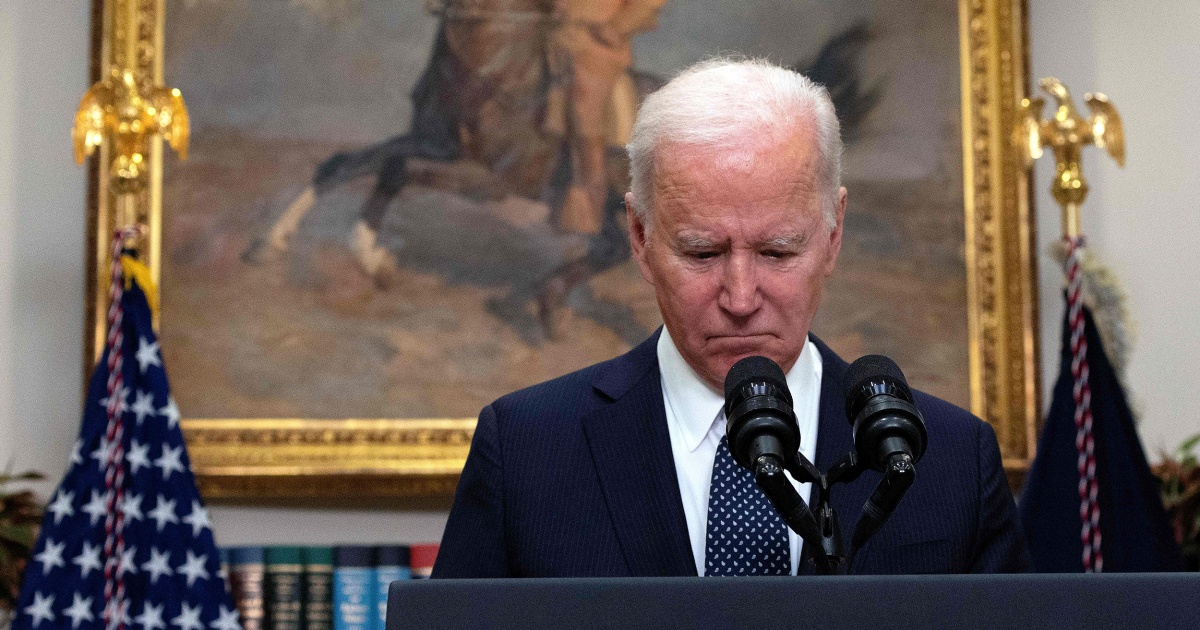 Inflation is now getting too close to disco-era highs for comfort, with Biden as president after 36 years in the Senate and eight years as vice president. Inflation skyrocketed 7.9 percent over the past year, according to the February report from the Bureau of Labor Statistics, the fastest rate of inflation since January 1982.

That puts Biden and Democrats in dangerous political territory heading into November’s midterm elections. But Biden — whose poll numbers have already been boosted following Russia’s invasion of Ukraine — thinks he has a boogeyman to pin the problem on: Vladimir Putin. The Biden administration blamed the Russian president Thursday for the rapid American price hikes, as it did earlier in the week when it came to spiking gas prices.

Unfortunately for Biden, it’s a tactic that’s unlikely to work. As he witnessed from the other end of Pennsylvania Avenue more than four decades ago, rampant inflation has the potential to steamroll the political fortunes of presidents in both parties — and it’s difficult for them to use geopolitics as a way out.

It’s certainly the case that there will be some economic impact on Americans that Biden can credibly attribute to the steps he’s taking in response to Russia’s war. On Friday, Biden called for suspension of normal trade relations with Russia, which, if approved by Congress, would bring the U.S. into line with sanctions already imposed on Russia by the European Union and Group of Seven industrial nations.

Biden said the U.S. will also bar imports of Russian diamonds, seafood and vodka, which comes on top of a sweeping ban on Russian oil, natural gas and coal, and the imposition of sanctions on certain Russian banks. That includes expulsion of many Russian banks from SWIFT, the financial global messaging network, which is effectively the backbone of world commerce.

The negative economic consequences of these actions for Amerricans are likely to be limited, however, since Russia isn’t a key U.S. trading partner. Similarly, Russian crude oil and petroleum product exports to the U.S. represent only 8 percent of all its imported oil and less than 2 percent of the American supply. In fact, these moves could even have a positive economic payoff: They have tremendous symbolic power in showing U.S. resolve in supporting Ukraine against Russian aggression, which in turn could bolster investor confidence and keep the American economy churning.

The most recent inflation problems have also been compounded by fast-rising gas prices. The cost of gasoline in February rose about 6.6 percent from the previous month, which made for a one-year jump of nearly 40 percent. Given Russia’s importance to energy markets and the clear relationship between a ban on oil and jump in gas prices, Biden will likely have a relatively easy time getting the American people to see Putin as responsible for their pain at the pump.

But gas prices by themselves haven’t usually proved to be such a potent political weapon. The last time gas prices were this high, in the summer of 2008, congressional Republicans tried mightily to blame the Democratic House and Senate majorities. They tried to do the same thing again when gas prices spiked in early 2012. Yet the Democratic presidential candidate, Barack Obama, comfortably won both times.

That’s because voters have shown themselves at least somewhat more understanding of the rise-and-fall nature of gas prices, which are primarily based on the cost of oil, a global commodity. It’s not to suggest high gas prices won’t be a political headache for Democrats – the party most likely to get the blame, since its members hold full elected power in the federal government – but it’s less likely to be a fatal one.

Inflation, though, is a different matter. Inflation nagged at Carter throughout his single term in office, reaching a staggering 14.6 percent in March and April of 1980. Carter went on to lose in a landslide to Republican Ronald Reagan, who made Americans’ inflation woes a central part of his campaign. (Plenty of other factors of course contributed to the back-to-back presidential losses — including Ford’s September 1974 pardon of disgraced former President Richard Nixon and the Iranian hostage crisis that bedeviled the Carter administration.)

Nowadays, inflation is something a large bulk of American voters haven’t experienced in any meaningful way, having mostly abated over the past four decades. Virtually any person under age 45 would have no real memory of the Ford- and Carter-era effects of fast-rising prices. So, the current price crisis comes very much as a shock.

Moreover, there’s also a chance gas prices could level off in the almost eight months before Election Day even if that seems unlikely in the immediate short-term. But not so with inflation. Treasury Secretary Janet Yellen said Thursday that Americans would probably see another year of “very uncomfortably high” inflation. A similarly downbeat message came this week from the White House Council of Economic Advisers.

In a recent poll, 55 percent of voters said inflation would be extremely important to their congressional vote this year. That’s a big problem that Biden is trying to solve by pointing to Putin. “Today’s inflation report is a reminder that Americans’ budgets are being stretched by price increases and families are starting to feel the impacts of Putin’s price hike,” Biden said in a Thursday statement after the Labor Department announced the 7.9 percent rise in consumer prices.

But there’s reason to doubt a broad swath of Americans will buy that excuse. Inflation has been rising for six months, well before Russia’s invasion of Ukraine. And Republican critics are trying to make sure Biden doesn’t get away with pawning off responsibility.

“Inflation just rose to 7.9% – another 40-year high!” tweeted Rep. Vern Buchanan, a Florida Republican, on Friday. “First they said it was ‘transitory,’ then they blamed supply chain issues, then they claimed inflation ‘is actually a good sign.’ And now it’s Putin’s fault. When will the WH admit they are to blame for #Bidenflation?”

The Biden administration has relatively few tools at its disposal to quell inflation in the short term — particularly in the less than eight months before Election Day. WIN was a loser for Ford’s re-election prospects, and Carter fared no better amid stubbornly high prices. The best news for Biden is that the next presidential election won’t happen for more than two-and-a-half years.

David Mark is an editor, author and lecturer based in Washington, D.C.