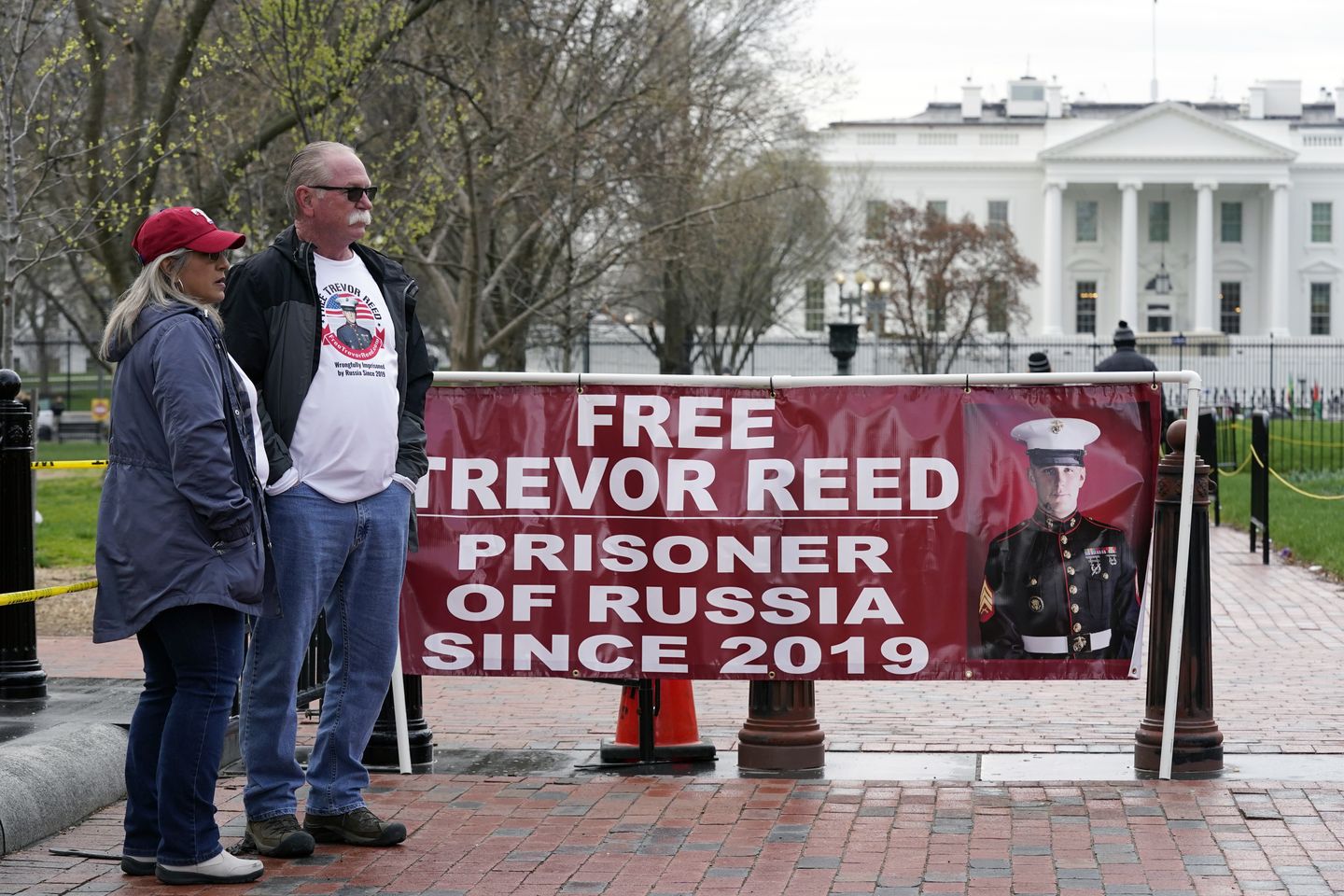 President Biden on Wednesday met with the parents of Trevor Reed, a former U.S. Marine who has been imprisoned in Russia since 2019, the White House said. “During their meeting, the President reiterated his commitment to continue to work to secure the release of Trevor, Paul Whelan, and other Americans wrongfully held in Russia and…

President Biden on Wednesday met with the parents of Trevor Reed, a former U.S. Marine who has been imprisoned in Russia since 2019, the White House said.

“During their meeting, the President reiterated his commitment to continue to work to secure the release of Trevor, Paul Whelan, and other Americans wrongfully held in Russia and elsewhere, and to provide all possible assistance until they and others are free and returned home to their families who are advocating so passionately for their release,” White House press secretary Jen Psaki said in a statement.

Ms. Psaki said the White House national security team will stay in regular contact with the Reeds, the Whalen family and other Americans wrongfully detained abroad.

Earlier Wednesday Mr. Biden expressed an openness to meeting with Mr. Reed’s parents, who had been protesting outside the White House fence.

Mr. Reed’s parents protested outside the White House, calling for a meeting with Mr. Biden that they say was promised to them.

“It was 22 days ago when the president said that he would have someone call us immediately when he got back to D.C. and set it up,” Paula Reed, Trevor’s mother, told reporters outside the White House fence.

“The office staff have not called us. And we wanted to be here to bring attention to Trevor’s case and to let them know that we did not forget. We’re waiting for that phone call and we want the meeting the president promised us,” Ms. Reed said.

Paula Reed and her husband Joey, sat in front of the White House’s North Lawn wearing T-shirts with their son’s picture. They hung a large red banner with the same photo of their son and the words: “Free Trevor Reed: Wrongfully Imprisoned by Russia since 2019.”

The Reeds said they intend to stay outside the White House through Friday.
It is not the first time the Reeds have sought a meeting with Mr. Biden. When the president traveled to Texas earlier this month, the Reeds unsuccessfully pushed for a meeting with him.

Mr. Biden later called them and pledged to bring their son home. He also said the White House would work to set up an in-person meeting with the family.

Trevor Reed was sentenced to nine years in a Russian prison in July 2020. He was convicted of assaulting two Russian police officers after he allegedly blacked out while drunk at a party in 2019.

Mr. Reed’s family has always insisted that he’s been convicted on trumped-up charges so Moscow could use him as a political pawn when they needed one.
His parents said he’s on a hunger strike to protest his treatment by Russian officials.

During his stint in the Marines, Mr. Reed served as a presidential guard at Camp David for former President Obama.

Efforts to secure Mr. Reed’s release come as relations between Russia and the U.S. have reached their lowest levels in decades because of the Ukraine war.

The situation has complicated efforts to bring home not only Mr. Reed but other Americans detained in Russia, including WNBA star Brittany Griner. Ms. Griner was detained in Russia for allegedly possessing vape cartridges containing oils derived from cannabis.

Also detailed in Russia is Paul Whelan, a former Marine who was detained at a Moscow hotel in December 2018 and arrested on espionage charges, which he has consistently and vehemently denied. He was convicted and sentenced in June 2020 to 16 years in prison in a trial, condemned by U.S. officials as unfair.