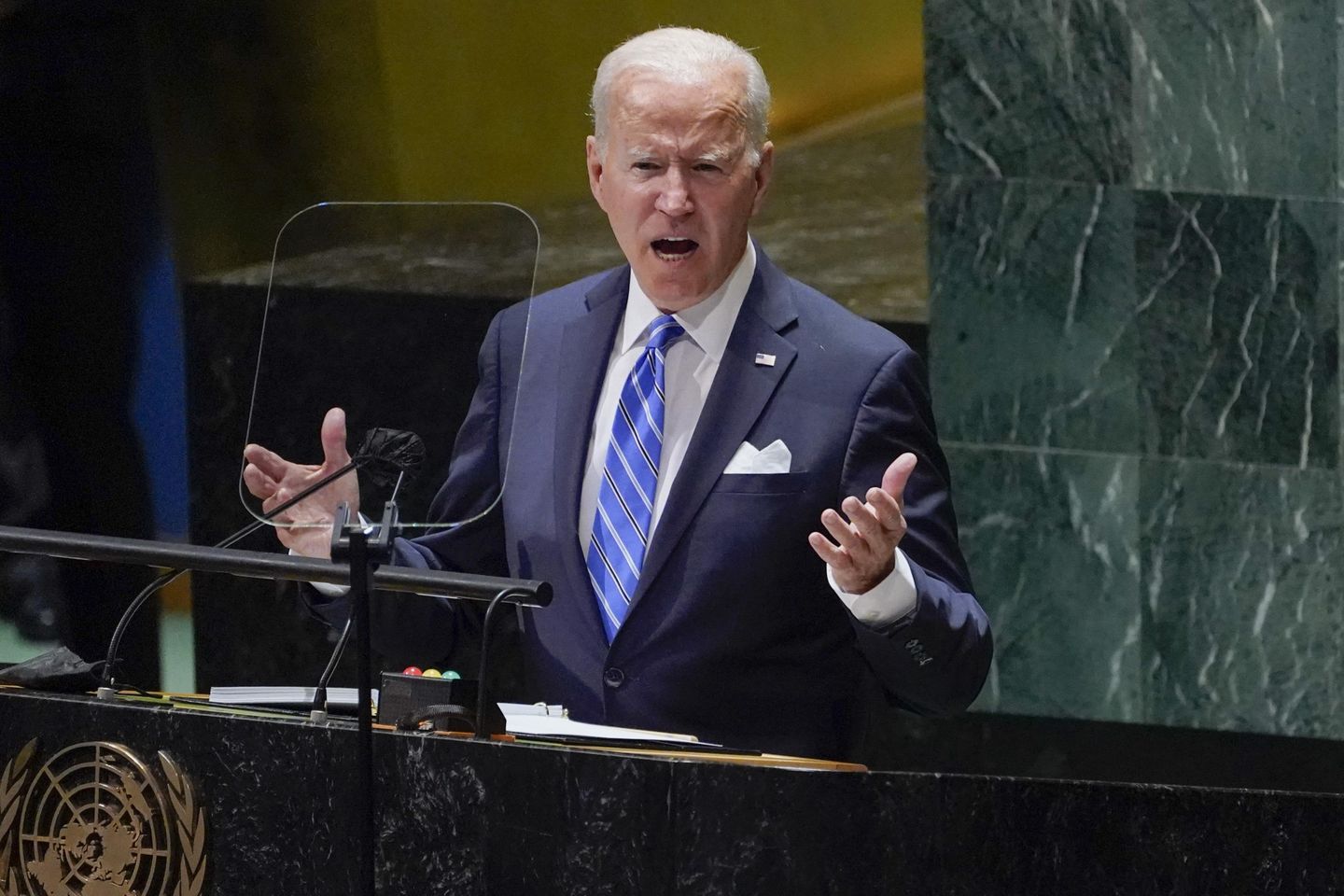 President Biden this week signaled he is backing off the hardline U.S. policies of the Trump administration in dealing with China and reverting to the more accommodationist approach of earlier administrations. At the United Nations on Tuesday, Mr. Biden made clear in his speech to the General Assembly that strategic competition with China will take…

President Biden this week signaled he is backing off the hardline U.S. policies of the Trump administration in dealing with China and reverting to the more accommodationist approach of earlier administrations.

At the United Nations on Tuesday, Mr. Biden made clear in his speech to the General Assembly that strategic competition with China will take a back seat to the administration’s more important priorities: addressing the pandemic and climate change. Mr. Biden also made no mention of China and its role in the pandemic, and gave no indication he plans to hold Beijing accountable for its role in the start and spread of the COVID-19 pandemic.

” “Instead of continuing fighting the wars of history, we are fixating our eyes on the challenges that hold key to our collective future: end this pandemic, addressing the climate crisis, managing the shifts within global power dynamics, shaping the rules for the world on vital questions like trade and cyber; and facing terrorism as it stands now,” Mr. Biden stated.

Mr. Biden suggested that his Indo-Pacific policy is returning to former President Barack Obama ”s “leading from behind”, which sought to reduce the U.S. leadership and allow allies and partners to lead the way in addressing problems.

Ignoring the current reality of a coercive China seeking to replace the United States as the dominant power in the world, Mr. Biden insisted that he is not seeking a “new Cold War” under a world divided into hostile blocs. Mr. Biden pointedly made no reference to the world’s most significant states promoting authoritarianism — Communist China or Vladimir Putin‘s Russia. He instead pointed out the problems in Venezuela, Belarus, Cuba and Myanmar.

Two recent actions also are signs of renewed appeasement-oriented policies toward China: Toronto’s Globe and Mail newspaper reported that the U.S. Justice Department is in talks with China to resolve the extradition case of Huawei Technologies executive Meng Wanzhou. China has been aggressively pushed to have all U.S. charges dropped and for the “princeling” executive to be allowed to leave detention in Canada and return to China.

Republican Reps. Scott Perry from Pennsylvania and Tom Tiffany from Wisconsin have recently submitted an amendment to the annual defense bill currently working its way through Congress. This would allow members of the military, Pentagon civilians and others to be exempted from the new restrictions by the Biden administration on contact with Taiwan. The draft amendment states that a June 29 State Department memorandum rescinded the eased contact limits and restricted official travel and communications for the island-state that China regards as a breakaway province.

The new restrictions mean that military and Pentagon officials must obtain special permission from State Department before travelling to Taiwan. They will need to use tourist passports and not official passports. The Pentagon is also prohibited from calling Taiwan a nation, playing the national anthem or displaying the Taiwan flag at U.S. government buildings.

Officials have also been barred from attending events at Twin Oaks in Washington, which is Taiwan’s official residence and de facto embassy.

Asked by a reporter on the flight from New York to Washington why Mr. Biden failed to mention China once during the U.N. speech, White House press secretary Jen Psaki said the president wants to “work together” with China and other states on issues of common interest such as climate change, terrorism and cyberthreats.

U.S. policy “is not directed at any particular country but directed towards any country that does not meet the standards, that we will keep the standard of democracy high and hold standards for human rights high,” she stated. “And, you know, that’s a message that should be heard by anyone who is listening.”

FBI counterintelligence agents recently conducted a search of the Chinese merchant ship Zhen Hua 24 that delivered four gigantic shipping container cranes to Baltimore harbor last week. The agents were said by informed sources to have uncovered intelligence-gathering equipment on the ship during the search on Sept. 15.

No details about the equipment found were possible to be obtained.

The Zhen Hua 24 sailed from Shanghai — home of the Shanghai State Security Bureau, the Ministry of State Security office that conducts aggressive intelligence-gathering operations against the United States. The ship dropped anchor near Annapolis, and then reconfigured its cranes to clear two bridges.

The huge cranes carried aboard the ship cleared the Chesapeake Bay and Key Bridges by about 10 feet as they sailed to the Port of Baltimore. The Associated Press reported that the transit came to a halt on Thursday at the spans.

Each of the four cranes are some 450 feet high, about 25 feet taller than current port cranes used to move containers from piers to merchant ships.

The Coast Guard issued a notice in federal register noting that it had established a temporary safety area in waters of the Chesapeake Bay, Patapsco River and the Chesapeake Bay to facilitate the Zhen Hua’s transit.

The zone restricts any vessels from coming within 500 feet of the Zhen Hua and the notice said enforcement of the safety zone would be assisted by federal, state and local agencies.

“This action is necessary to provide for the safety of life on these navigable waters during the movement of the M/V Zhen Hua 24 while it is transporting four new Super-Post Panamax container cranes to the Port of Baltimore,” the notice said. “This rulemaking will prohibit persons and vessels from being in the safety zone unless authorized by the captain of the Port Maryland-National Capital Region or a designated representative.”

China could launch nukes from space

Mr. Kendall, in a speech to the Air Force Association conference, said there is a danger the system could be revived by China, which is engaged in a massive expansion of its nuclear arsenal. “There is the potential for weapons being launched into space and then go through an old concept from Cold War called fractional orbital bombardment (FOBS), which basically takes a target into orbit and then deorbits it back to earth,” said Mr. Kendall. “If you use this kind of approach, then you don’t need to use a traditional ICBM path,” he stated. “It’s a way to avoid defense systems and missile warning systems.”

“There’s no question about the technical feasibility or technology to do these types of things,” Mr. Kendall said, noting China‘s satellite with a robotic arm capable of crushing satellites.

Such missile systems could also be used for electromagnetic pulse strikes. EMP attacks make use of the gamma radiations from a high-altitude nuclear explosion to destroy all electronics in wide areas. This allows for an attack on an enemy without the need to cause a kinetic destruction above-ground explosion.

“Today China has multiple ICBM and [space launch vehicle] platforms to accomplish this mission, such as the massive CASIC KZ-21 –now in development — that could loft 80 to 100 warheads into orbit,” Mr. Fisher said.

“It is a way of defeating early warning systems and countering ABM system,” he said. “So the [People’s Liberation Army] marches towards nuclear superiority, it is ready to counter any U.S. moves to increase missile defense.”