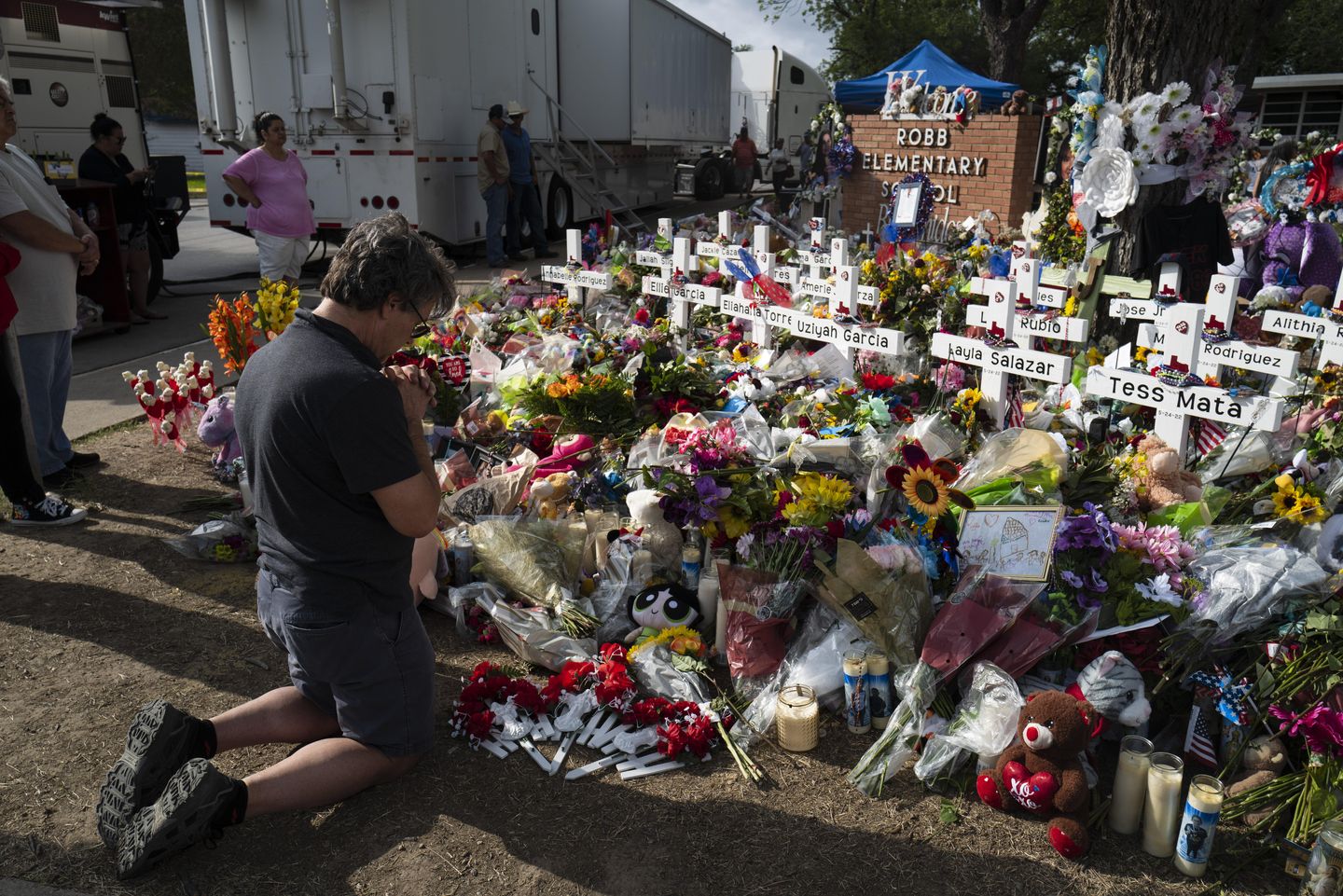 An open back door. A missed gunman. A scramble for equipment. An elusive key. A baffling decision. A series of critical mistakes and unlucky breaks have drawn scrutiny in the week since the deadly school shooting in Uvalde, Texas, offering a grim reminder of the fine line that can separate a close call from an…

An open back door. A missed gunman. A scramble for equipment. An elusive key. A baffling decision.

A series of critical mistakes and unlucky breaks have drawn scrutiny in the week since the deadly school shooting in Uvalde, Texas, offering a grim reminder of the fine line that can separate a close call from an unspeakable tragedy.

“It can be as simple as maintenance of a door that is not locking properly, or propping the door,” Mo Canady, executive director of the National Association of School Resource Officers, told Fox News Channel.

“It only takes one of those things to create this level of failure, and it’s why we have to be so critically focused every day, in every school in this country, in making sure that every detail is being tended to,” he said.

None of that stopped the 18-year-old gunman from shooting and killing 19 children and two teachers in a fourth-grade classroom at Robb Elementary School, where nearly everything that could go wrong on May 24 did go wrong.

At 11: 27 a.m., an unidentified teacher propped open the backdoor with a rock. A minute later, the gunman crashed his grandmother’s truck into an adjacent drainage ditch, then headed on foot to the school carrying a rifle and backpack of ammunition.

He shot toward two employees outside the funeral home across the street, but missed them. He climbed the perimeter fence. He fired at the school building.

The teacher ran back inside to retrieve a cell phone, apparently to call 911, and reemerged from the back door, but did not shut it, according to Texas Department of Public Safety director Steven McCraw.

That was the first mistake. Then came the bad luck: The Uvalde Consolidated Independent School District [CISD] has six school resource officers for nine schools, but none was at Robb at the time.

At 11: 31 a.m, however, one officer came speeding over in his car — and drove right past the gunman, who was crouched behind a vehicle. The officer approached the teacher instead, Mr. McCraw said.

At 11: 33 a.m., the shooter slipped into the school through the still-ajar backdoor. He then made his way to rooms 111 and 112, a pair of joined classrooms nearest the door, which he was able to enter.

Sen. Ted Cruz, Texas Republican, said the Uvalde gunman “got in the exact same way the Santa Fe shooter did,” referring to the deadly 2018 shooting at Santa Fe High School in Texas.

“He walked through an unlocked back door into an open classroom,” Mr. Cruz said Friday at the National Rifle Association convention in Houston. “We need serious funding to upgrade our schools to install bulletproof doors and locking classroom doors. And to hire law enforcement to protect our most precious asset — our children.”

Even if the door had not been propped open, Texas Lt. Gov. Dan Patrick said the gunman may have been able to get inside anyway.

“That door when it was finally shut, it did not automatically lock,” Mr. Patrick told Fox News. “We put in the funding for schools to do that. This was a different kind of lock that had to be activated apparently.”

At 11: 33 a.m., Mr. McCraw said the gunman fired off “hundreds of rounds” in the adjoined classrooms. Three Uvalde police officers arrived at 11: 35 a.m. and headed to the classroom, but the gunman opened fire and hit two of them. They fell back.

Seven officers were soon in the school hallway, but they were hamstrung by inadequate equipment and the tactical advantage of the shooter, who had locked the classroom door.

Rep. Tony Gonzales, Texas Republican, said he asked one of the initial officers at the scene, “Hey, why didn’t you get in sooner? Walk me through that.”

The congressman said the officer told him: “’Look, here’s the deal, Tony, it was a steel door, and it was locked and it would go outward, not inward, meaning I would have to pry it open with a can.’ He goes, ‘We didn’t have those kinds of tools. We were scrambling looking for it.’”

The police tracked down a game warden who had a crowbar and hammer, he said, before obtaining the keys to the classroom from the school janitor.

“Eventually, they find a key,” Mr. Gonzales said on Fox News. “But what I’m getting at is these folks wanted to get in there as fast as they possibly could. These were their children. These were their neighbors.”

Patricia Chapa, whose brother is a Uvalde police officer and whose sister teaches at the school, insisted that the officers did not retreat, but were held at bay by the gunman.

“They did not retreat until the shooter was down. They were in there the entire time,” Ms. Chapa said. “People don’t understand, people think nobody was inside during that time. They were inside, they just couldn’t get to the shooter. The shooter would come out and shoot at them. There was no way for them to just go in there and shoot.”

What followed was what has widely been decried as the episode’s biggest blunder.

Instead of rushing the attacker, the incident commander reclassified the gunman from active shooter to barricaded subject, and opted to wait for back-up from the Border Patrol.

That decision flies in the face of the widely accepted police protocol adopted after the 1999 Columbine High School shooting, which is to run toward the gunfire instead of waiting for SWAT teams or other support before engaging the gunman.

“That is 100% contrary to the lessons taken from Columbine,” said George Brauchler, former district attorney for Arapahoe County, Colorado.

“The lessons learned from Columbine were, you don’t f— around, you run to where the problem is, because at the end of the day, the primary goal is saving those kids’ lives, period, full stop. There is no other goal. It is to save those kids’ lives,” he said.

He cited examples from his tenure as district attorney, including the 2013 Arapahoe High School shooting.

There, a school resource officer sprinted to the library to confront a gunman who had already mortally wounded one student. The shooter took his own life as the officer approached.

“Keep in mind, when they find him dead in the library, on his forearm written in Sharpie were the other classrooms he had intended to go to,” Mr. Brauchler said. “If this dude had not run to the library, what happens? What freaking happens?”

The Uvalde incident commander has been identified as the school district chief of police, Pete Arredondo. He has not commented publicly.

After the early barrage of gunfire, the shots were only intermittent and apparently directed at deterring the officers, leading to the conclusion that the gunman was the only one still alive in the classroom.

“Any firing afterward was sporadic and it was at the door,” Mr. McCraw said. “So the belief is there may not be anybody living any more and subject is now trying to keep law enforcement at bay waiting or entice them to come in for suicide” by cop.

Some of the children were still alive, however, and somebody on the outside knew it.

Starting at 12: 03 p.m., 911 operators were receiving calls from within the classrooms from at least two students saying that seven to eight children had survived. One girl pleaded for dispatchers to “please send police now.”

It’s possible the officers at the school were unaware of the calls. The investigation into the shooting is being led by the Texas Rangers and FBI.

“We still don’t know that, and the interviews are still going on,” Mr. Patrick said. “One of the problems we have across America is different police are on different bands, and whether they got that information directly or not. But the truth is, it doesn’t matter. They should have gone in. They should have already been in.”

He and others have defended the police officers who followed orders, insisting this was not a situation like the 2018 Parkland shooting, where the school resource officer at the scene never entered the building.

This is not like “the case in Parkland where no one went in. These police went in within four minutes or so after the shooter went in through that unlocked door,” Mr. Patrick said. “They were there in three or four minutes, and they bravely encountered him and they were shot. Some of them were wounded.”

After that, “no one left the school. They hunkered down in the hallway, about 19 of them, so he did not escape anywhere else in the school. So these policemen did the right thing at the beginning, and many wanted to go in,” he said.

At 12: 15 p.m., the Border Patrol tactical unit [BORTAC] arrived. A seven-officer team used keys to open the door, breached the classroom, and killed the gunman at 12: 50 p.m.

Texas has invested $100 million in hardening schools since the Santa Fe shooting, but the Uvalde massacre shows that best practices such as having only one open entrance into a school haven’t always been followed.

“When the doors are open and police don’t follow protocol, these things happen,” Mr. Patrick said. “But I join the governor: I’m angry. It should not have happened, but my focus is on the families, and that’s what we have to focus on, is healing them during this time and putting politics aside.”