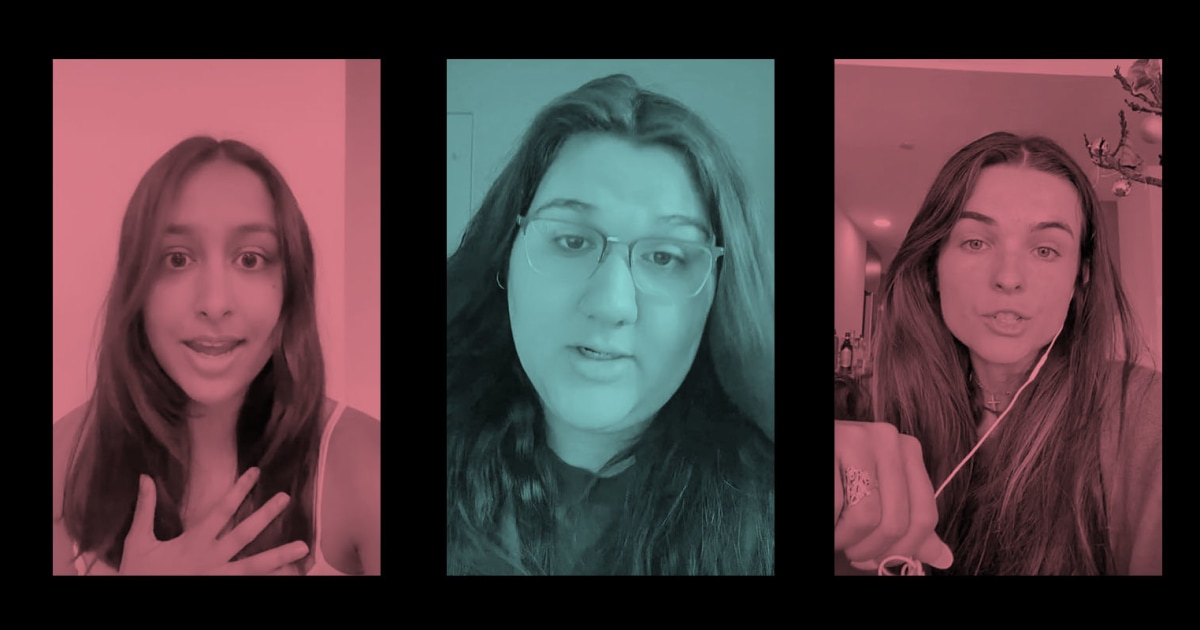 Victoria Hammett was goofing off while watching a live stream of The Met Gala on Monday night when she saw the news.Politico published a leaked draft opinion indicating the Supreme Court would overturn the constitutional right to abortion enshrined in Roe v. Wade.Within minutes, Hammett, 23, the deputy executive director for non-profit activist group Gen-Z For Change, was on…

Victoria Hammett was goofing off while watching a live stream of The Met Gala on Monday night when she saw the news.

Within minutes, Hammett, 23, the deputy executive director for non-profit activist group Gen-Z For Change, was on a call planning how she and others could fight back. The group is made up of members from the Gen-Z generation, which Pew Research defines as anyone born after 1997.

“We were all texting each other immediately,” Hammett said. “We set up a Zoom call … and then immediately we hit the ground running figuring out what we could do to help.”

Since it formed in 2020, Gen-Z For Change has been among a host of activist groups and movements led by young people to combat what they perceive as the stripping of their rights and protections.

In recent years, groups like March For Our Lives, which advocates for reforming gun laws, and The Sunrise Movement, which seeks to raise climate change awareness, have been led by Gen Z, also known as zoomers, to create the change that young progressives feel will create a better future. These organizations, which have strong social media presences, are more adept at wielding the internet in ways their older counterparts are typically less experienced in.

Between Monday night and early Tuesday, Gen-Z for Change had already posted three TikToks about the draft opinion, telling its followers what the news implied and how people could get involved in protesting. Those three videos have racked up more than 2 million views collectively.

The news of the draft opinion was not a total shock to Gen-Z For Change, Hammett said. After oral arguments in Dobbs v. Jackson Women’s Health Organization, the case at the heart of the draft opinion, she said the organization was already preparing for June, when they believe Roe v. Wade may be officially overturned.

The organization’s first action plan: educate their more than 1.4 million TikTok followers what the news could mean for abortion rights. Next: recruit coders to help build systems that could automatically overwhelm future anti-abortion watchdog websites with false information — even if those websites have yet to be built.

Hammett said that Gen-Z For Change anticipates that if abortion is outlawed, a wave of websites will be used in some states to report women having illegal abortions. While these websites are not currently active — and likely have yet to be made — the organization is preemptively recruiting coders to take them down if they do pop up.

The websites Gen-Z For Change plans to target include watchdog websites and tip lines intended to report people having abortions to the authorities, in the event that abortions become mostly illegal. The programs their recruited coders could build range from automatically mass-submitted imagined reports to images of cartoon characters, which may overwhelm servers and cause a site to crash, rendering it useless.

Sofia Ongele, digital strategy coordinator at Gen-Z For Change, has used this tactic multiple times for her advocacy.

“Our community recognizes that injustice anywhere begets injustice everywhere,” she said. “Whenever we see a tip line, we have the technology to help people blow them up [with messages].”

Previously, she coded a site that users could access to send an automatically generated message to members of Congress, calling for representatives who appeared to support the Jan. 6 insurrection, and a bot that spammed a local California city council in support of a decision to memorialize two school shooting victims.

The success of these tools, Ongele said, rests on Gen-Z For Change’s follow, who actually use the tools, which she said makes protest accessible for those who are not sure how to help the cause.

Gen-Z for Change was formed around the 2020 presidential election to motivate young voters and engage those of voting age and younger to get involved in electing Democrats and promoting progressive policies.

The group began as a TikTok account, on which members could post informative content about the election and issues that some zoomers hold dear. Today, Gen-Z for Change, is a non-profit organization offering internships, specific guides for young people, like tips on talking to parents about vaccinations, and office hours to meet with followers.

Since its inception following the first presidential debate of 2020, it has amassed more than 1.4 million followers on TikTok.

Recently, Gen-Z for Change made headlines when The Washington Post reported the group had been briefed by the Biden Administration on the conflict in Ukraine and was helping to advise the administration on the top influencers on the platform to disseminate information.

The organization has also taken on anti-abortion whistleblower groups.

Gen-Z For Change’s stance that abortion rights should be protected is not a fringe belief among the age group. According to a September 2021 NBC News poll, 65 percent of zoomers and millennials ages 18 to 34 believe abortion should be legal.

Overwhelming tip lines has been a growing protest tactic among zoomers and social media users. Progressive activists requested tickets to a June 2020 rally for then-President Donald Trump, which they claimed led to low turnout to the event. Other factors, like the pandemic, likely played a role in the low turnout.

Since then, that strategy has become a common form of protest.

Ongele said so many zoomers engage in these online protests because they feel pessimistic about the future and find solace in the few things they’re able to do to fight back.

“It’s really easy to become discouraged and a little nihilistic and I don’t blame people for that because it can be really dehumanizing to see your rights on the chopping block,” she said.

Hammett said she hopes what young people are feeling now will help motivate them to register to vote, and, eventually, get them to the polls in November.

“A lot of people feel helpless right now and they want to know what they can do, and the silver lining in all of this is there’s a lot they can do.”