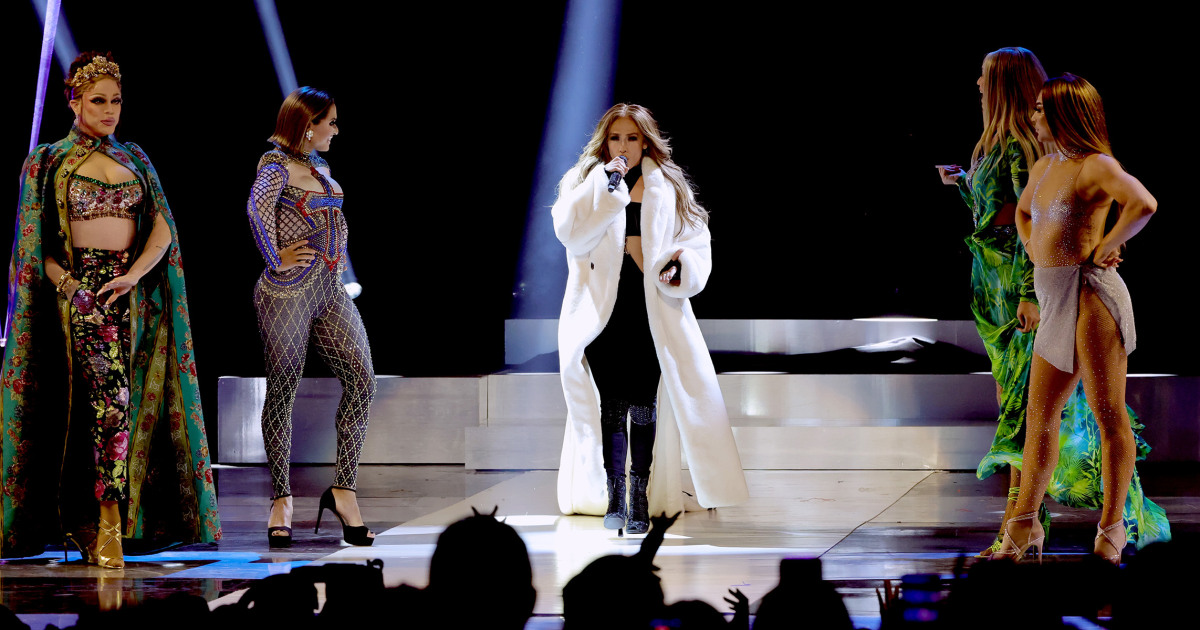 Jennifer Lopez got an introduction worthy of an icon before her iHeartRadio Music Awards performance Tuesday night.Right before the singer stepped on the stage to belt out her hit “Get Right,” a group of 12 drag queens — many former contestants of “RuPaul’s Drag Race” — modeled some of her most memorable looks. And it was nothing short of…

Jennifer Lopez got an introduction worthy of an icon before her iHeartRadio Music Awards performance Tuesday night.

Right before the singer stepped on the stage to belt out her hit “Get Right,” a group of 12 drag queens — many former contestants of “RuPaul’s Drag Race” — modeled some of her most memorable looks. And it was nothing short of incredible.

From pants and bralettes to catsuits and shorts, the queens sported a vast range of looks representing the various stages of the 52-year-old’s career. The soundtrack, of course, was set to some of the legend’s greatest singles.

Actor and singer Billy Porter set the tone for the fashion-forward performance in a vibrant pink vest suit. After he left, the first queen — Kerri Colby — strutted onto the stage in a gorgeous green ensemble reminiscent of Lopez’s iconic green Versace dress from the 2000 Grammy Awards.

Up next, Naysha Lopez dazzled in a bejeweled bodysuit with a giant cross embellishments at the bust. The style resembled the fabulous frock the actor wore at the 2018 Met Gala.

As the singer’s hit “Waiting for Tonight” played in the background, a third performer, April Carrion, sashayed down the stage in a nude and white look and imitated Lopez’s signature hair flip.

The crowd went particularly wild when one performer (Melissa Befierce) resembling the late Selena, an American singer that Lopez portrayed in a film by the same name, danced to the song “Bidi Bidi Bom Bom.”

When performer Alyssa Hunter, who was sporting an all-white ensemble, had their moment in the spotlight, they tipped their hat in recognition of the influence Lopez has had on her fans.

Jessica Wild brought plenty of energy to the stage in a bedazzled catsuit and wrapped in a giant Puerto Rican flag. And the following performer (Mariah Balenciaga) certainly heated things up as they ripped off their pink skirt to reveal a sexy black bodysuit, paying homage to Lopez’s Super Bowl 2020 halftime show performance.

Fans of Lopez’s song “Jenny From the Block” got a sweet treat as one queen (Sasha Colby) sported an outfit that channeled the classic music video. Then the performance ended on a high note with one ultra energized queen — Laganja Estranja — expertly spun around a poll in tribute to Lopez’s performance in the film “Hustlers.”

Other queens who performed were Jorgeous, Kimora Blac and Morgan McMichaels. When the icon herself took the stage, the queens paused before taking one final walk across the stage in unison.

It was an exciting night for Lopez, who accepted the Icon Award and thanked her fans for sticking with her through the years.

“I appreciate this so much, so very, very much,” the singer said. “I wish I could tell you that awards were the most important thing to me, but that’s not true.

“And don’t think that I don’t appreciate the shiny, sparkly things, because I do! I cannot lie, everybody knows that I do,” she continued. “But this isn’t why I do this. It’s not what matters the most to me. I really do it for you guys.”

This story first appeared on Today.com